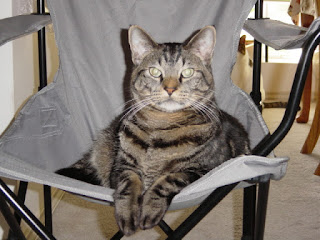 Dorf crossed over the bridge on Friday, September 10, 2015. Maw was at the PSI Pet Sitter's Convention in Myrtle Beach, SC when Dorf threw a blood clot which caused him to lose all feeling for the lower half of his body. Luckily, Paw was at home watching after all of the cats and found Dorf howling and carrying on, so Paw rushed him to Dr. Stevenson and found out what had happened. Since we had lost Reno a couple of months back when he threw a blood clot, and then had a heart attack, we decided it was time to let the ol' boy go. Dorf had no teeth, was blind, had horrible arthritis in his hocks and was on pain killers, and had developed fluid around his lungs. He was a favorite of this household and is missed very much.

Luf, All of us at Forty Paws

Email ThisBlogThis!Share to TwitterShare to FacebookShare to Pinterest
Labels: Dorf has Crossed Over

I am so very sorry to hear that Dorf ran off to the Bridge. He was always one of our favorites of the 40 paws! We will surely miss him. Our deepest comforting purrs and prayers for you and Paw.

We are so very sorry for the loss of Dorf. And we're sorry you weren't able to be there when he passed. You gave him a happy life. A warm hug!!!

I'm so sorry - several cat blogosphere members have thrown clots recently, and it's such a sad and sudden way to go.

I am so sorry for the loss of your handsome boy, Dorf. My baby,Lucy went to the bridge the same day. I hope they are playing together.

We want to add our sympathy for your loss. It hurts to lose a loved one.

We want to add our sympathy for your loss. It hurts to lose a loved one.

I'm terribly sorry to read this. That's how Chumley passed and to this day (it's been almost 9 years) it makes me ill to think of that terrible night. I hope Dorf is having a grand time at the Bridge, and I wish you all peace. Nicki and Derry send soft purrs and gentle head butts of comfort.

We're so very sorry to hear about Dorf.

We are so very sorry to hear about Dorf. Love and hugs from all of us.

guys.....we send our sincerest sympathies to maw, paw and the family, we know how hard it is; and how sad. dorf is and always will be one handsome dood; we will always remember him for "hammicks" ♥♥♥♥♥ from boomer, dai$y, tuna....& dude and sauce too ~~~

I am so sorry that Dorf has made his journey to the Bridge. You gave him a good life full of love. Our thoughts are with you.

We are so sad that Dorf left and crossed his bridge. We're sending our purrrrrrsssss and prayers and hugs to all of you.

Merceda, we sure are sorry about Dorf. It is just so sad for our fur friends to leave us. WE know that Dorf had a fantastic home with you and we know that he will be missed a lot. Sending many big hugs.

We send our condolences on your loss, our own is recent so we know and acknowledge your hurting hearts. RIP amazing wonder cat.

Astrid and the kitties Kashim, Othello and Salome said...

we are so sorry to hear that sweet Dorf has run to the rainbow bridge!
'till we all meet again buddy!!

love to all of you - our heart and thoughts are with you tonight. <3

Oh Merceda, I am so sorry to learn this.
Dorf was one of the first cats we met when we started cat blogging, and have long loved his pictures and his Hammicks.
May he rest peacefully on a hammick over the bridge, and please know our love and empathy is with you at this time.

We are so very sorry for your loss and hope your fond memories will help you through this time. Dorf was so very handsome, and now he is whole and pain-free too! He had a wonderful life because of your love and that is the best gift you can give any kitty. Purrs and headbonks to all of Dorf's family left behind.

I'm so sorry for this awful parting in your fur family. Our hearts are broken for you. Its never easy to lose a kitty, and having to make that decision is so hard, but you did the right, best, thing for him in the end. Hugs and love from all of us to all of you

Oh no, we is so furry sorry to heer that Dorf has runned off to the Bridge. We know Finny will be among the welcoming furends so happy to see Dorf. Me and Jazzy, Cuzzin Cavalli and owr new sisfur Nutmeg are sending lots of purrs to the fambly.

We are so very sorry for your sudden loss of your beautiful boy. Sending purrs of comfort in this difficult time for your family.

WOW, the original Ham-Mick tester is gone :(
We are very sorry to hear Dorf has crossed the Bridge.
It is hard to say goodbye to a beloved kitty,
so we send you comforting purrs.
He had a great life with you.

Purrs Georgia and Julie,
Treasure and JJ
and mom Nancy

We're so sorry to hear that Dorf has gone OTB. We're sending healing purrs and prayers to you.

We are so sad to hear about Dorf! He knew you loved him so much. And I bet when the house is so quiet at night, you will hear a familiar purr....

we are so very sorry to hear about Dorf....it is never easy no matter the circumstances. purrs

We are very sorry to hear about Dorf's passing. We know you loved him so dearly, and so, so well. Sending you hugs, purrs and prayers of comfort.

We are so sorry to hear about Dorf. He was a special kitty and will be missed. Purrs.....

I am so sorry ! My cat Ashton could be his twin. Same colorings. May time bring you nothing but good memories.

We're so sorry for your loss ! We send you comforting purrs and gentle headbonks. Purrs

Sending you all many gentle purrs for the loss of your sweet angel Dorf. Take care
x

So sorry you had to let go of your beloved Dorf. Sending Soft Pawkisses to comfort you <3 <3 <3

We are so sorry that Dorf had to leave. He was a gorgeous fella and we hope that happy memories fill your hearts soon. Dorf, there will be lots of Hammicks to test at The Bridge!

The poor fellow, he was fighting a lot: blindness, arthritis, pain... He'd done his best, and so had his maw and paw. The world is a little less now. Godspeed, Dorf.

We are so very sorry to hear that your sweet Dorf had to leave. We are sending lots of warm, comforting purrs and hugs. Pooh, Chancy, Mumsy and Popsy.

So sorry for your loss! He was a great Cat! Till We Meet Again Dorf!
Hugs to the Family,
Samantha & Mom

So sorry for your loss.

We are so sad to hear that dear big old Dorf had had to go home over the Rainbow Bridge. Watch over us dear friend until that day we all meet again. We know our family Angels and so many others will be helping you get used to your new wings.
Purrs and Prayers from all of us to all of you
Timmy Dad Pete and Family

I am so sorry you had to let Dorf go.
I had to make this sort of decision recently so I know how hard it is.
I am certain his is comforted by angels and others on the Other Side.

When the cat is away said...

Please accept our condolences as you grieve for your beloved Dorf. What a handsome mancat he was, and we know he will be forever missed and loved. Sending purrs and prayers. XOCK, Lily Olivia, Mauricio, Misty May, Giulietta, Fiona, Astrid, Lisbeth and Calista Jo

We are so sorry to read that Dorf had to leave for the Bridge, but he is happy and whole again, waiting for you.
~ The Bunch and Mom Bobbie

We are very sorry to hear the sad news about Dorf. We are sending lots of purrs and headbumps to help with your loss.

We are so sorry that Dorf had to go to the Bridge. And so close to losing Reno.

Sending soft purrs of comfort on the loss of both kitties,

So sad to hear about Dorf. It is always so sad when you have to let the "oldsters" go when we would love to hang on to them. But they always live on in your heart and sometimes the memories are sweet. Hugs, purrs and prayers to you in the grieving period. Dorf was a very sweet ManCat.

We are so sorry for your loss. Purrs to you all.

We had been wanting to stop by and say how sorry we were to hear of Dorf's passing, sending many gentle purrs your way...

We missed this - so very sorry to hear about Dorf. We lost Ivy in late Aug to a blood clot too. Thank you for your kind words about Minnie - sending hugs in your loss.

Purring fur you at Christmas as you remember sweet Handsome Dorf over the Rainbow Bridge.

-Katie and the Katz.

Thanks for the Secret Paw package. I will get pictures posted on Caturday. Boxing Day.