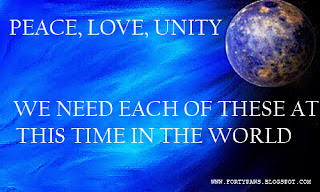 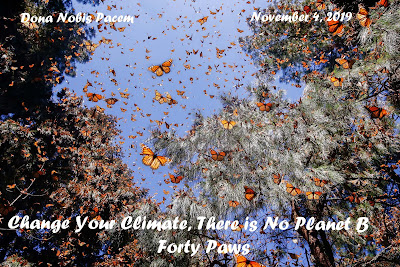 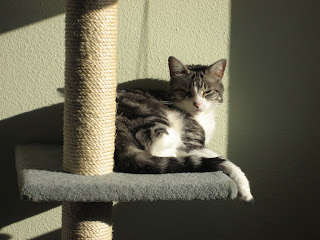 Sally crossed over today. She had cancer and had quit eating and drinking over the last day. She lived longer than her three brothers, Smokey, Reno and Obi and she never took all of the medications that those three boys endured over the years. We will miss her around here. She was finally sitting on my legs once I brought out the plush blanket a couple of weeks ago. She would only sit on me with the plush blanket in place.
May 1, 2002 to October 28, 2018

Email ThisBlogThis!Share to TwitterShare to FacebookShare to Pinterest
Labels: Sally crossed over, Sally loved Costco Chick-Hen, the last of the original foster failures 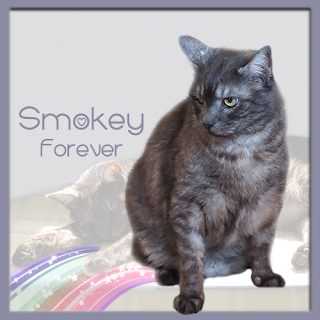 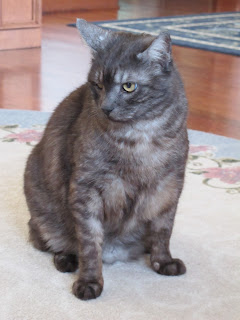 Hello everyone! It is actually our 10th Blogoversary! We sure haven't posted much over the last few years, but we try and stop by if we see that a kitty has crossed over and leave a few words on the blogs.

This is Smokey. He was a foster failure from 13 years ago, when we took in 4 foster kitties who were all very ill. They were about 9 months old when we took them in. It took a long time to get them over their horrible diarrhea, and get their Herpes-1 virus under control. They all had a messy eye on the right side, except for Obi. We are foster failures because we end up falling in love with the kitties and keeping them.

And we have another group of foster failures, where we have 4 more kitties who are now about 2 1/2 years old. We need to update our blog. It is on Maw's list of stuff to do.

Thanks for stopping by! Hugs to all of you! 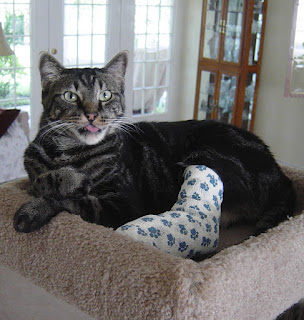 Today is a very sad day at Forty Paws. G.T. crossed over this morning. This poor guy went through so much in his lifetime. He broke his leg in 2005 as you can see from this picture. He was climbing up onto the top of the china hutch and fell off, breaking his leg. He had horrible allergies for fourteen years, and received allergy serum shots every week, in addition to extra shots at the vet when he would start scratching and ulcerating his skin in various spots on his body. And over the last few months he went into severe kidney failure and was on fluids and also had to be put on Lasix because the fluid would build up around his lungs and cause him to have rapid breathing. Medical intervention throughout this guy's life kept him alive.  And he would NOT TAKE PILLS. So everything had to be injected into this kitty. He did fine with injections. But forget about any pills!

He was a happy cat, and loved to eat anything with spaghetti sauce, alfredo sauce, salmon, rotisserie chicken, turkey, shredded cheddar cheese, and certain salad dressings. He was always licking off my plate. Yes, he ate cat food as well as human food... He sat on my lap a good deal of the time, and slept with me as well.

We lost his brother, Dorf, last September when I was at the PSI Pet Sitters Convention. He threw a blood clot and it paralyzed the back end of his body. So he crossed over on September 10, 2015. And now we have lost G.T. on September 4, 2016.

We fostered the entire litter of these cats back in 2000. There were 8 kitties, and they all looked so identical, that we put ribbons on them when they went up for adoption so that people could look at their biographies and see what kind of kitty they were. Both G.T. and Dorf went to the adoption for several weekends, and were not adopted, so we ended up keeping both of them. And we really enjoyed them so much! They were both such great kitties! But they both had serious medical issues for the majority of their lives, and so we wonder how the other 6 kitties did in their homes.

Luf,
All of us at Forty Paws and Maw

Email ThisBlogThis!Share to TwitterShare to FacebookShare to Pinterest
Labels: G.T. crossed over, Sad here at Forty Paws, We will miss him 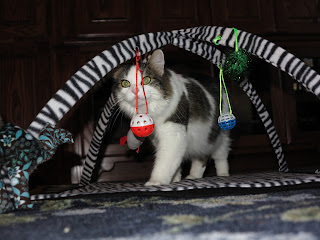 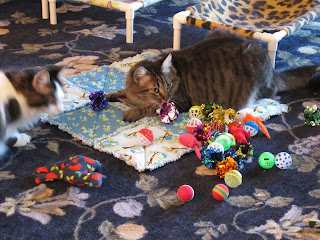 Madeline lying on the home made quilt with the nip attachment! 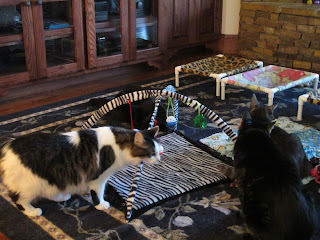 Misty Mae, Midnight (behind the tent in the center), G.T., and Smokey 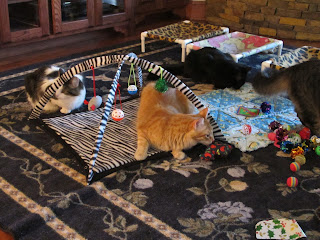 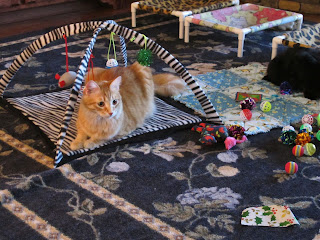 Marmalade lying in the cat tent. 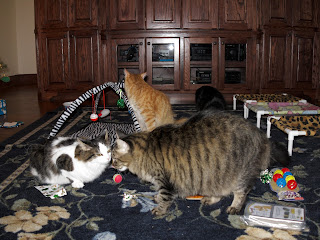 Misty Mae, Madeline, Marmalade, and G.T. (in the back) 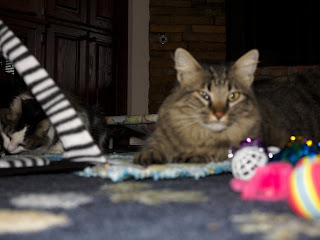 Madeline chillaxin' on the homemade quilt!

We luf all of the prezzies that we received from Angel Smokey and Tessie! We have been playing with them all day and all night and all day today! And we also received a 3 pack of Yeowww Catnip cigars, which we totally luf!!!!

Hugs from all of us at Forty Paws!

Email ThisBlogThis!Share to TwitterShare to FacebookShare to Pinterest
Labels: Secret Paws 2015, totally cool, we luf all of the prezzies
Older Posts Home
Subscribe to: Posts (Atom)