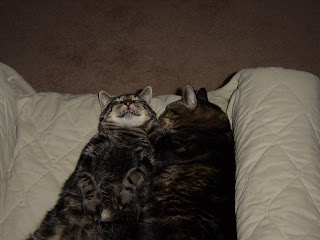 Mine is another long story, but whose isn't in the house of Forty Paws? My brudders and sidders and I came from Kaufman County. We were born to a farm cat, but our Mom became a sail kitty on the FM road. (FM means Farm to Market for those of you not from Texas.) So, the farmer and his wife wanted us all to find really good homes so we wouldn't become sail kitties so they found a rescue person who then contacted our Maw to foster us.

First thing Maw and Paw duz to us when we get here is give us each 2 baths!!! We were kinda covered in red dirt and fleas. 2 baths!!! And they said we smelled. All 8 of us were grey tabbies except for one all black sister. It was very hard to tell us apart, except for me because I growled all the time. Hence, my name. And we had to get Albon for a very long time because we all had coccidia, and everybody loved it except me. I've always been rather offended by medications.

So, we all got fixed, although I didn't know we were broken, and we were taken every weekend to the big box retail pet store and put in a big cage with these goofy bows on us to tell us apart. Well, everyone was adopted eventually except my brother Dorf and me. And since we were becoming lap kitties, and Bow, Jenny, Annie and Gatsbi weren't lap kitties, Maw and Paw just decided, "Aw, what's 2 more?" So we got our furever home.

Well, over time, I started itching. A lot. So Maw takes me to the V-E-T. She says I probably have allergies. Since I DON'T take pills, Maw had the human pharmacist make up liquid prednisolone mixed up with Triple Fish flavoring. Ummmmmmmm. That's the bestest ever stinky goodness. I would beg and stand up against the big white cold box to get my Triple Fish every day. Ummmmmmmm. Very good stuff.

Well, I was still itchy, and sometimes it would get so bad that my liddle cheeks would become ulcerated and ooze because I scratched them so much. Then I would have to go to the V-E-T and get those prednisolone shots. WOW! Did I feel great after that!!! For about a month.

Well, Maw and Paw got tired of me scratching all the time (AND HOW DO THEY THINK I FELT?), and it was VERY expensive to get my Triple Fish formulation every month, so I went to a V-E-T allergist. I went to sleep, and look what happened!!!!! 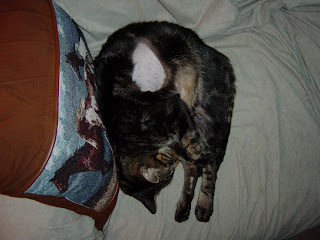 Not only did I wake up shaved, but they made me polky-dotted!!!! Ack!!! But the V-E-T allergist was very impressed with my test. He said out of 34 possible allergies, I had 27!!! About the only thing I'm not allergic to is cats. Good thing, huh?

But let me tell you, I don't get the itchys no more, no how. I is one itch-free poodie. So, today I got shot. Again.

Stay tuned tomorrow, same station, about the same time, and I'll tell you the story behind this wonderful picture of me. 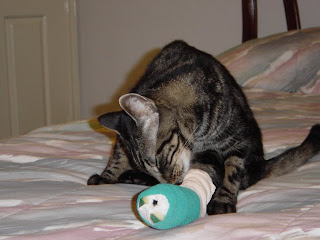 Email ThisBlogThis!Share to TwitterShare to FacebookShare to Pinterest
Labels: G.T.

WE are sorry to hear that yu hab to get shot ebby month, but no itchees. That makes it worth it all. BTW, cute cuddle pictures.

I'm enjoying learning about you and your family.... so first shots, then a broken paw? Poor kitty! Tara

whoa - getting shot sounds way scary! of course, if it makes you feel better...
anyway, it's nice to meet you. my name's Grr - for reasons similar to yours. my sister Midnight has posted a challenge on our blog for your people. we know you're new to the blogging community, so in case you don't already know, sometimes we challenge another cat blogger to do something and, in return, we offer to donate $$$ to someone in need. we're challenging your people to try to get as many of you as possible into a single photograph and post it on your blog. we'll donate $5.00 for each of you kitties who appears in the photograph to Oreo, who's trying to raise money for his momma's medical bills. sound like fun?
purrs!
Grr

I loves learning all about you guys. You have a very interesting story! I am sorry you has to get shot, but I'm glad it makes the itchies go away. I can't wait to hear the story behind the cast!

Getting a shot once a month sounds better than scratching yourself to death. Did you break something there?

Hi GT. Our Mom loves Tabby cats and you are very cute. We can't wait to hear what happened to your leg.

G.T., your house of 40 paws sounds like ours, 'cept we got 60 paws! Well, really only 52 paws right now 'cause 8 of them are in Italy while we're stuck here in Indiana. You sound like kinfolkKitties to me, so we linked to your blog.

We're all rescues, too - we came off the streets, out of garages, pickup trucks, lakes, woodpiles ...
And I have the allergy problem, too. It gives me a bad cattitude 'cause I'm really old (17) so I scratch and scratch myself and get cranky and then go scratch somebody else. I got shot a few times at the V.E.T. but it hasn't helped too much. Maybe I need to go take a nap at a V.E.T. allergist, too?

What an intriguing tale; I was on the edge of my seat!

I've got to tell you, it sounds to me like maybe my sister Ninna ought to be shot, too. Mom got the Elavil down her throat tonight (with a syringe), and she ran around with slobber hanging from her lips for about a half hour. Every time Mom would try to wipe her off, she'd make tracks.

It's a really great thing you're not allergic to cats!!!

Oh, yoor mom sounds like a nice (and bizy) ladee. We wuz all rescued too. Zippy is da only one who had a medikal problum, she is missing toes on her frunt feet! Well, I do haf a sensitif tummy and haf to be careful wut I eat. Momma duzent like it whin I squirt cuz it stinks and is pritty messy. I cant wate to hear wut happend to yoor little footie.~Speedy

That was a very interesting story! It was great to learn more about you.

Those shots don't sound like fun, but I'm glad to hear you aren't itchy anymore. Good thing you aren't allergic to cats. Are you allergic to humans? Hopefully not.

Angel gots allurjeez too mebbe acause the lady in pyjamas at the place wiff the yellow roof (spelled V*E*T) said she was lickin all her furs off acause she was lurjic. But Mama says she don't think so acause Angel is new-rottick and she only licks her furs off when she's nurviss and now her furs growed back acause I asked Santy Claws at Chrissmuss if he'd give Angel her furs back and he did.

Hi, my name is taz and I'm a itty bitty kitty but I'm free years old and Angel is five years old and she's like my Mama kitty acause she takes care of me.

You can come see our bloggie too

I like your name a lot, my mammacat likes your namesake from the book at lot too.
Thanks for posting the stories about your forty paw family, we really enjoy learning about you all!