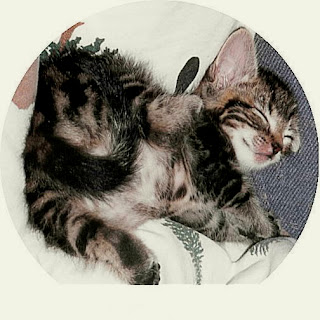 Lil' Orphan Annie, or Annie for short, was orphaned at about a week old. Someone found her and took her to the police station, where a nice officer then took her to a V-E-T who gave him a bottle with some KMR and told him how to feed her. Well, since the officer was on duty and couldn't be feeding a baby kit, he took her to the big box retail pet store where I happened to be purchasing large amounts of food for my TWO cats and a foster family of a mom and 8 kittens. Being very unaware of the ages of babies, I thought that perhaps my nursing queen would accept Annie, so I proudly brought her home.

Well, she was probably about 1/4 the size of the other babies, and they were at the size and age to hiss and spit and go Halloween cat on her, and the mom wanted nothing to do with this teeny baby.

I then found myself suddenly looking on the Internet for instructions on caring for teeny orphans. Geez, I didn't know that I had to stimulate her to go and clean it up, and burp her, and all that. I learned very quickly. Then, her system didn't like the KMR so she got diarrhea BAD, and her little behind became raw. We went to the V-E-T where I used to work, and he gave me some ideas on what to do and checked her stool for parasites.

She didn't get better, and soon it was the weekend, so we went to the emergency clinic. This vet suggested that she couldn't handle the formula and told me to mix up goat's milk, Karo Syrup, and Nutrical for her. So I started feeding her that formula. She finally started thriving on that, and pretty soon over the next couple of weeks discovered that she had teeth and could chew on the nipples as teething rings. She was just starting to adapt to kitten food, but we went through a mess o' rubber nipples in the process. To this day, I can't leave rubber gloves hanging over the sink or she chews the fingers on them.....

It became time to take her to the Adopt-a-Pet at the big box retail store. I took her on a Saturday morning and dropped her off. I then cried for the next 24 hours, so my dear sweet husband went on Sunday morning and carefully picked her up from her cage and brought her back home to me. That was almost 8 years ago now.

I've never taken on anymore bottle babies since then because I know I can't part with them.

BTW, we call Annie a Chuman, Cat-Human, because she isn't quite cat, and isn't quite human. She has confused identities. She wakes my husband in the middle of the night to hold her head in the palm of his hand. She lays in front of my husband's computer so that she can make biscuits on his computer screen while he brushes her and complains to her about all the fur getting in his keyboard. She loves it. She doesn't like any type of stinky goodness, including tuna. She loves one type of dry crunchies, and will occasionally eat our steak, chicken, or turkey.

She also likes to go to the potty in bathroom sinks, so we keep the sinks filled with water to prevent her from doing that, and as drinking water for the rest of the mob. When she uses the litter boxes, you'd think she was digging to China the way she covers and covers and covers. I guess my instructions on litterbox etiquette as a surrogate mom were lacking... 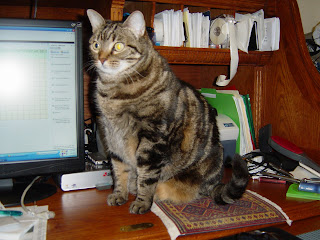 As you can see from this picture, she recovered nicely from her orphaned kitten hood. As a matter of fact, last year she was having a little "huff" of a cough. Very infrequently, but I took her in and they did x-rays. Well, because of her extra layers along her rib cage, they couldn't quite tell if her lungs were inflamed so they overnighted the x-rays to a radiologist who proclaimed that she had pneumonia!!!

Our V-E-T told us to put her on a diet, but that's kinda hard when you've got 9 other mouths to feed.
Posted by Forty Paws at 8:51 AM

Email ThisBlogThis!Share to TwitterShare to FacebookShare to Pinterest
Labels: Annie

Everytime we visit your bloggy, we love your beans more and more. Hi Annie! You are a beautiful kitty! I think your mommy did a fabulous job with you. Your tiny kitty picture was almost more than we could take! What a nice police officer.
I think it was fate your mommy was at the store at that very moment!

Oh, I love learning about all of you kitties! I'm so glad you're blogging! Annie is a very amazing kitty with quite a story. I'm sure there is no way your mom could ever part with a bottle baby, I know mine couldn't!

Oh Annie! What a great and interesting story about you. You sure did grow up to be a beautiful girl.

Many parts of your story remind me of my own Abby. I believe that she was weaned away from her Mother too soon because of certain behaviors she has...much like you.She loves to lay either her head of feet in the palm of my hand and curl up. She also expects to be fed from a spoon (which I do for her...I love her so much) and she has some unusual potty habits. Being a Manx she doesn't have as much control as our other cats, so many times when she gets the urge she goes right where she is. She also flings litter everywhere when she does go into the box to make her little puddles. She is quiet the little lady, like you.

What a great story! Annie is very lucky that you took her in and looked after her when she was a baby. She is a lovely cat now and very fortunate to have such a wonderful forever home.

Annie is one lucky girl! And she's grown into such a beautiful lady with the help of a catlover.

Sounds like Annie had a tought beginning! I am glad she is in a good home now!

that's a lovely story. our Lady and the teenagers used to foster bottle babies and then give them up for adoption. they always cried lots too.

by the way...diet? ha! you look like you're the same size I am, and I don't need no stinking diet!
Grr

What a beautiful story, and such a lovely happy ending. It's like a fairy tale for Annie! And I think (no matter what the vet says) that she looks like a nice healthy-sized kitty now!
Thank you for sharing this story with us!
I'm going to add your site to the catnip links at Purrchance To Dream
I hope that's ok!
~ Morgen

dat storee remindz mi mom uv wen a boy came to her apartment an sed da followin:
Hey Lady. Do you want to buy a cat?
mi mom den saw da littlest kitten in hiz pocket.
after she scolded him fer tryin to "sell" da kitten ... she took it an did da same thing ... feedin it kmr an makin it pee an poo.
he gre up to be a verree healthy cat.
it wuz a long time ago.

Quite a story their Annie. We are glad that you got to stay with your beans who fed you as a baby.

We learned about the burping also, Munchkin was about a week and a half when we found him. Hope that you get over your pneumonia quickly.

What a sweet, heart warming story! Mom's eyes are a bit wet...what a sweetie!

Two resident cats a momma and her eight fosters is a lotta furry squirmy wormy kitten love! I'm glad you had room for more, Annie sounds so nice

That wuz a grate story yu told abowt Annie. I had to be fed wiff a bottle too when I wuz fownd but I only chewed up ONE rubber nipple.

Dat is a lovely story bowt Annie. she has grone up to be a furry purrty kitty.Furrget D I E T's theer no good. It just makes kitties fink thay are being torchered.
We like the pichur of seven kitties. Owr beans once had eleven kitties, but thay wuz all brofurrs, sisfurrs and cuzzins, so thay all yoosed to sleep in a hyooj nap pile.

What a beautiful story about you saving Annie! I had tears in my green eyes!