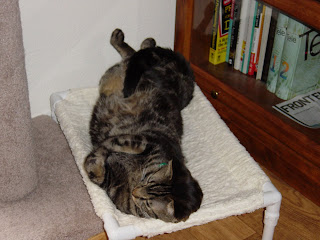 How can I stay mad when they are so sweet and cuddly? Plus, I remembered reading that cats in free roaming areas have a territory of 150 acres per male and 15 acres per female. Obviously, intact males will overlap several females' areas. But here I am trying to get 10 (fixed) cats to co-exist in a house of 1700 sq. ft. Which is primarily why we have 5 tall cat trees and allow the cats to climb to the top of hutches and entertainment centers. Cats in multi-cat households can stake out varying heights of horizontonal territory.

Who am I to get mad at them when they throw their hissy fits because another poodin is tromping on their little teeny bit of staked out land?

Anyway, I took Dorf outside with me yesterday to help me with raking leaves and weeding. Which only served to make the other cats jealous and they all hissy fitted at Dorf. Then I tried to let Bow into the backyard with Dorf, but Dorf started exhibiting Top Cat tendencies, when in actuality, Bow is the true Top Cat. Bow really misses his inside/outside days which came to an end in August 2000 when Davy was killed. That's when the cage was built and the cat flap was installed which goes "clack, clack" when a cat goes through it.

Oh, the trials and tribulations of living with 10 cats....

Yeah, we're cute and there is no resisting cute cats. Plus, we're cats so you can't get mad at us as we never do anything wrong on purpose. Though I do attack Chase sometimes just because.....

Boo, Jinx & Ping all arrived first. Then Button, but she was our outdoor cat. She would NOT come inside. She wouldn't even come into the garage. Abby arrived next and the dynamics changed. Abby was a feisty little tornado and she didn't take anything from anybody (and still doesn't, but she loves me and trusts me completely now) then Gracie came and we had another change. Boo, Ping, Jinx and Gracie all got along, they were all docile. But Abby would beat up on all of them. They have all learned to 'get along' with her. Now we have Ping and Gracie as co-conspirators. They love to gang up on Boo. Boo wants to stay in our bedroom while we are at work. So all day she is alone in "her" room. Jinx is a total placid laid back cat...he also is the biggest cat. No one really bothers Jinx. Occassionally Abby will try to fuss at him or give him a swat but he just stays up tall and looks at her and basically says I am 3X your size whaddaya goin do about it...

So I know exactly what you mean about a multi-cat household.

Oooo you must be having some decent weather to be out there raking and weeding. We are apartment dwellers and that makes us cats afraid of the outside.
We run when the doors are opened... we run behind the sofa.. :)

I understand the dilemma. I once saw a picture of an enclosue that you can put in your back garden. I can't describe it very well except to say that it was like a big, netting tent. It was made especially for cats who want to be outside but in a safe way.

our mommy says to tell your mommy "God Bless you!!!" She had enuf prollems wif 4 of us. (well, 2 kittens and 2 geezers who was sick and then wented to the Bridge). She can't imagine more than 4, but she says she has that "itch" to get a fird kitty - she had 3 kitties for 18 years, so 2 of us is still a little weird for her.

We're only 3 of us. Zippy is a grouchy gerl wif no front claws (cuz of an accident when she wuz a little kitty) but she rules da howse. No one messes wif her! Sadie is pretty mellow and even Zippy will allow her near when she's in da mood. Speedy is our first male. He's Sadie's playmate and buddy but if he aggravates her too much she just lifts her paw and he immediately lays down and tucks his head under his paw. The only hissing comes from Zippy! It's a warning-do not touch her or she'll whap you into next week!

Oh Momma said she loves cats but no more male cats 'cause she had one who was always marking his territory and nothing helped. Everyone said they'd have gotten rid of him but she just couldn't do it and he didn't want to be an outdoor cat all the time! It's hard to have that many cats and have them all get along.

I'm glad it's just me and the other two girls...

Silly Dorf! There can be only one true Top Cat and we all know it is Bow. But it is fun to pretend sometimes, right?

You have quite a houseful. The outdoor cage with the clacking flap sounds like a great idea. I agree that it is impossible to stay mad at cats, because they are just so loveable.

We haf an outdoor cage too, but it is not as big as yours. We get into it through the bedroom window, and it means we can go out at night and be safe. Mum has only had us two boys furr about 4 years now since kitty yumbum went ofurr the bridge, and sometimes she sez she misses haffing lots uv poodins. We say "No way mum, we are enuff furr yoo" and owr dad agrees wiv us. Dat didn't look rite. She has had us furr neerly 7 yeers, but 4 yeers wiv only 2 poodins, cuz I fink she told yoo befurr that she yoosed to haf 11 poodins.