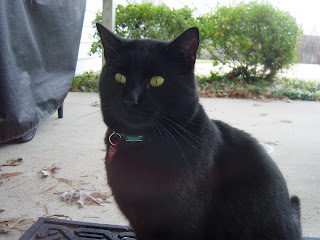 Kitikati-san posted a comment yesterday to us about their friend finding a Little Black Kitty (LBK) that had either been hit by a car, or had been thrown from a car. This kitty has been cared for by a vet and needs a furrever home. He has been tested and vaccinated and was already neutered prior to being found. He is currently staying with a wonderful person in the Nashville area. So stop by the linkie above and check him out.

This reminded us of our own Little Black Cat (LBC). His story is a bit odd. He started showing up at our house and looking in the windows at our cats and watching them eat. (Windows are very close to the ground in Dallas homes.)

He would hang around for about a week, then he would disappear for about a week. So we sort of figured that maybe his person would stick him outside when they travelled out of town or something. Naturally, we fed him during the week he would come to our house. He was a friendly little guy, so we figured he had a person. Months passed, and he continued to hang around and mature. So I went to the big box retail pet store and made a tag for him that said "If you own this cat, please call xxx-xxx-xxxx." No one called. And since I was in the rescue business at the time, and knew the importance of getting cats fixed before they could reproduce any new cats, I had him fixed, tested, and vaccinated.

A few months later, someone called and said they saw his tag, but they didn't own him. It seems that LBC would spend his "off" weeks over at their house which was about a mile away. He slept inside their boat in their garage and ate with their other cats. This nice man said he would like to keep LBC and would keep him inside until he got used to staying there. Obviously we were thrilled and transferred LBC's vet records to him. They renamed him, and we never saw LBC again. What a wonderful ending to LBC's tale.

So, please drop by Kitikati-san's and check out this poor little LBK who desperately needs a loving home.

Email ThisBlogThis!Share to TwitterShare to FacebookShare to Pinterest
Labels: LBC

Meow! Thank you for posting such a nice story about LBC! Is LBC related to LBK? Maybe so. I am feelin more and more up about finding a lovely home for LBK! Thank you 40 paws for caring so much about LBK!

What a great story about LBC. I hope LBK's story has a happy ending too!

it makes me feel good when I hear nice stories like LBC's.
Thanks guys!
I'll keep LBK in my thoughts and prayers. Everyone should have a forever home.

What a great story about LBC. :) How wonderful that he found a great Forever Home! I hope LBK finds a nice Forever Home too.

That is a very nice story. I sure hope LBK finds a good home. We had a black cat who would come visit us when we lived in our apartment. He was very feral or else we would have tried to move him with us. We knew other neighbors were caring for him, too, so we knew that was OK, but it's always good to see cats get new homes...
--Jasper

Nice beans to help out with LBC and give him a furrever home. Keeping paws crossed for LBK.

What a wonderful ending to a great story!

What a wonderful story, and so great he found a good home! Tara

we luv Happily Effur After stories! we hope LBK kin haf one too!

That's a great story about LBC. I hope that LBK's story has a happy ending, too.