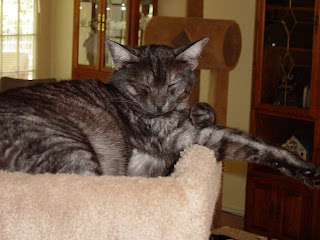 So here is Smokey, the last of the Forty Paws, and the sibling of Reno, Obi, and Sally. There were actually 7 kittens born to the feral mom cat with Herpes 1, but 3 kittens died in the crazy cat lady's garage.

Looking at their pictures side by side, you can see why the V-E-T said their cat momma "got around" and had "some explaining to do". 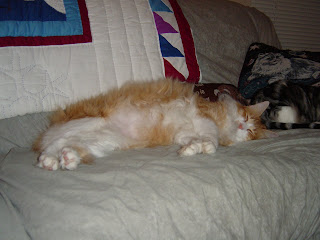 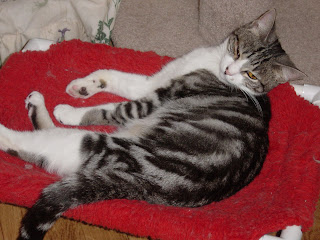 All 4 siblings have right eye scarring and are susceptible to a Feline Herpes 1 outbreak. They all have L-lysine mixed in with their stinky goodness on a daily basis.

Smokey's right eye scarred so that he looks a bit cross-eyed. His brown protein doesn't glop up and get crusty, it just constantly leaks. It drips in the food bowls, it drips on the floor while he's eating or drinking. It splatters the wall when he shakes his head after a drink. When there get to be too many brown spots on the floor and walls, I know it's time to do a thorough floor/wall scrubbing. I usually add bleach to help prevent the spread of FHV 1. Although vaccinated, most of the other cats here have ended up catching a mild form of FHV 1 and have cat colds occasionally.

Bow is the most susceptible since he is on steroids for his IBS. His colds ended up eroding his nasal passages and he had an endoscopy done of his nose and has been on heavy duty antibiotics several times to clear up his sinuses.

When Smokey came here with the horrid diarrhea from the crazy cat lady's garage, his fur was so coarse and wiry, we had never felt fur like it. After months of getting him over his diarrhea and getting good food into him and lots of brushing and petting, his fur became softer. Now, 3 years later, it is very silky. It's funny when we brush him because he loses almost none of his guard hairs which are the black ones, but the brush fills up with the silver awn hairs so it looks like we are brushing a white cat instead of a black cat!

Smokey loves to rub his weepy eye against anyone and everything. He is constantly rubbing his eye against the other cats, circling round them, and rubs it against our arms, our legs, the furniture, etc.

He is a huge cat, twice the size of Reno or Sally. He doesn't like to be picked up, but will lay on a lap occasionally. He likes to pick on Jenny and make her scream, and he rolls all of his siblings daily.
Posted by Forty Paws at 8:41 AM

hehehe. Sirtinnly looks like da momma cat had a LOT of ixplaining to do. Owr mum wunce had a cat cawled Auntie cat(cuz she wuz Kitty Yumbum's annty) an she had scarre eyes, an one day da surfiss of da eye burrst. Da V E T did a graft on her eye an yoosed da furrd eyelid to make a patch, den he stitched her eyelids togevver until the blud vessulls in da furrd eyelid attached to her eyeball. He sed she wud haf lost da site in dat eye, but insted she had purr-iffurr-ull vishun in it, an she wuz the best mouser mum efurr had.

Hiya Smokey.
It am gud to meetcha too! It sounded like yu had a furry rough start...but yu noos has a gud Maw who takes furry gud care of yu. It's nice yu has silky furrs. Our little Gracie is like dat. She am furry silky.

Nice to meet you Smokey. You are your siblings certainly had a rough start in life but you have a great forever home now. Sorry to hear about your weeping eye, but it sounds like your maw takes good care of you.

All of the siblings certainly do look different! Wow!

Hi Smokey! I am glad to meet you. My Mommie says they use L-lysine at the shelter too, to help with the herpes virus. She has also noticed that the stray cats that come in with poor nutritional status have bad, bad haircoats that greatly improve over time with good food and brushing. That is funny how you rub yer weepy eye on everything! I am getting very mad at the crazy cat lady who kept you before you got to yer good Maw.

Munchkin lost alot of his fur after he came to live wif us, we think it was do to the flea products. He has a grey undercoat, wif black topcoat. Glad to hear that you have a wonderful foreber home.

I'm very glad to meet you! I'm working on a Valentine for all of you Man Cats at 40 Paws. I'm sorry about the herpes, it sounds like you do have a very rough time with it. Luckily I don't have eye problems, well I do get a gunky eye A LOT. I spread it through the house too...

What gorgeous coloring you have, Smokey.

You are a wonderful lady to take such care of so many needy kitties.

Mittens fur is so much better since she got on her Eukanuba diet. She doesn't shed as much and she is very silky, almost as nice as mine.

It's furry nice to meet you. You're quite handsome and wow - none of you look like you are related at all! We're all 3 from the same mama and the same daddy, and we look like triplets - well, except that Grr is way bigger. We're very glad you all got away from the crazy lady!
Midnight

Smokey, you look wonderful! Nice to meet all of you, and I'm so glad you have a better home now! Tara

I'm so glad all of you have this great home now where beans care about you!

Wow! What a rough life! I am glad he and all the other felines there now have a good loving home!