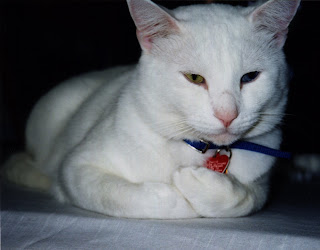 This was Davy, the White Panther. He was a huge, intact male cat about 18 months to 2 years old when he came to our house. 19 lbs. with a 13 inch tail. He could clear an end table in a single sweep with that tail, and never realize he'd done anything. He was totally white with one blue eye and one gold eye. He appeared at our windows one day to watch our cats eating. He continued to hang around our house for a couple of weeks, and our cats were inside/outside cats at the time, so a few scuffles occurred since he was the evil intruder.

I noticed that he appeared to be getting thinner, so I started feeding him. I actually thought he had a home because he was so big and snowy white. After we got to know Davy, we began to think his previous owners had probably dumped him. He had severe petting induced aggression. We came to the conclusion that his people had probably rough-housed with him from the time he was a kitten, and then since they didn't have him neutered, he likely became too much for them to handle, so they off-loaded him.

We had Davy neutered and vaccinated and tried to make him an indoor/outdoor cat with our other cats. He liked to spray doors and windows and beat up on our cats, so that didn't work so well. We ended up installing a cat door in one of our bedroom windows, and made that Davy's room so that he could come and go as he pleased.

Over time we enlarged his area by stacking baby gates across the hallway and keeping our other cats in the living area while Davy had all the bedrooms. Then we installed a home-made gate on hinges that was about 6 ft. tall, but Davy climbed that. So we made a gate that almost reached the ceiling and gave Davy 2 bedrooms and a bathroom. If he was in a good mood when he came in, we would let him into the rest of the house. If he was grumpy, he couldn't come out of his area. So many times he would sit on his side of the gate and look at us woefully with his bi-colored eyes.

When interacting with Davy, I was soon able to discern when he was going to change from sweet Davy into evil, biting, rabbit kicking Davy. It was subtle, but I knew I had to immediately go limp or I would get bitten and scratched very hard. If I tried to pull away, he scratched and bit harder. Neighborhood kids would tell me how beautiful my cat was, but that he was mean. I asked them if they tried to pet him and when they said "Yes", I would say that he didn't like to be petted and leave it at that.

My husband was bitten severely by Davy one time when he tried to break up a fight between Davy and Bow. His hand swelled to twice its size. He also was scratched numerous times while petting Davy because he never quite learned Davy's body language signalling that he had reached his petting limit. I could carry Davy over my shoulder like a baby when he was in a good mood, and he really enjoyed it. But when he wanted down, I knew that I needed to let him down immediately.

Davy loved to play tag outside. I would chase him around the house and then he would hide and leap out at me. I would act surprised, and then take off running in the opposite direction. When he "tagged" me, then I would turn around and start chasing him again. Usually, I wore out long before he did.

Sometimes we thought that Davy wasn't the sharpest tack in the box, or a few sandwiches shy of a picnic, etc. We knew that he wasn't deaf like many all white, blue eyed cats tend to be. But what we've since learned is that white cats with one blue eye are sometimes deaf on that side, and now we wonder if that was one of Davy's problems. It would explain some of his odd behaviors.

Davy was with us for about 3 years when he went missing in August 2000.

Email ThisBlogThis!Share to TwitterShare to FacebookShare to Pinterest
Labels: Davy

Wow, what a very pretty kitty. I did not know that about the being deaf if you have a blue eye. Can't wait for part 2.

What a pretty boy. It is a shame he couldn't enjoy a good petting because of stoopid humans. He looks like he was a big boy too!

Davy was a handsome cat! Too bad his first humans didn't treat him properly. He was very lucky to have you take him in!

Oh my, look at all you did for him. What a lucky kitty he was to have someone look out for him like that.

Davy sure was a beautiful cat! He was very lucky to have found you. And it is so great that you learned about his special moods, and what he needed to be happiest. That game of tag sounds fun!

A big kitty with a big purrsonality! We're glad he found such a good home with you. Part 2 is gonna make us cry, isn't it?

He was quite an impressive cat indeed! Wow he was huge. I like to play tag too, its great! I can't wait for part II. tomorrow.

I can't wait to hear part 2. I am so impressed you took so much time and effort in looking after Davy despite his mood swings. He was a very handsome boy. FAZ

It sounds like Davy had a rough beginning. Bless you for taking care of him as best as you could.

You won a participation gift for entering my contest. See my blog for details!

All I can say is that there will be a place for you maw and paw in heaven.

And tell paw that we know all about Branston Pickle... it's one of those great British things... kind of like the BBC.

Davy wuz a furry hansum kitty. We like the way he crossed his paws upwards. Uh-oh we haf looked at mum's face, and we just know she is going to haf leaky eyes in part two. She won't want to read it, but won't be aybull not to.

Davy is beautiful in that photo with his crossed paws. Thanks for sharing this with us.

Yup, mom's already getting kinda sad. She sez dat Davy wuz beyootiful and dat part two is gonna make her cry. But she'll read it anyway cuz she wants to know. Oh, and we think yoo pawrents are amazing!

Davy is a big, handsome cat. It's a shame that he was rough-housed so much early on that he became so aggressive. I'm very glad that he found such a good home with you and that you took care of his special needs so well. I am looking forward to reading part 2.

awww Davy's gorgeous. oh we hopes he comes back.

Davy's temperament sounds a lot like Bonnie. She liked to play rough as a kitten an Mom an Dad didn't know better. Now she growls and efun hisses at people moments after being nice. She'll give a sort of snort of warning that means "Stop now. Or else." You really did so much to integrate him in spite of his problems! Many beans wouldn't bother.