More About Our Enclosure 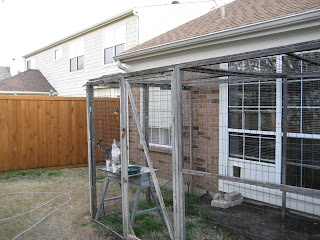 Here is another view of our "enclosure" as Daisy aptly renamed it. Sally could live out there if we let her. Trouble is, she has to come in to get food and to get warm when it is cold, or to get cool when it is hot.

My husband built this in 2000, after Davy the White Panther was killed. I will tell you his story over the next few days. Up until that point, our cats were indoor/outdoor cats, doing the typical "meow" to let them out, then standing at the door ten minutes later wanting back in, or not wanting to come in when it was bedtime. You all know the routine. They were all very adept at leaping the 6 foot tall wooden privacy fence in the backyard. Annie's favorite trick was to go out the back door, leap the fence and run around to the front door to be let back inside.

This enclosure was to be temporary. We fully intended to screen in the patio because the cats do track in dirt, mud, and grass and they do come in and throw up grass after eating it. We also discussed painting this enclosure to match the house. Just haven't gotten around to it!!

There used to be 2 azalea bushes and Asian Jasmine in the area that is currently all dirt. The cats killed all of that off. Last summer when there was nothing but weeds growing in that area, I had the brilliant idea that I would do some "lasagne gardening" where one puts down a layer of cardboard or newspaper, then puts compost on top. Over the winter, the newspaper/cardboard breaks down and the earth becomes enriched, workable soil. Well, my brilliant idea didn't take into account that the cats would be tracking in compost for the next 9 months. Best laid plans, huh?

The cage was originally 6' x 6' x 6'. It was expanded to 6' x 6' x 12' when the cat family continued to expand. It has always had the 6' tall door with padlocks on it. The top originally was not reinforced and stapled as well as it is now. But one night an evil intruder was walking across the top and fell through. All types of screaming and fighting and carrying on ensued until my husband went outside and rescued the evil intruder from the cage, and we locked our cats inside. Then the top was promptly reinforced so that incident couldn't happen again.

Sometimes squirrels will sit on top of the cage and chatter at our cats. Drives the cats nuts. Sometimes, a bird will come through the wire and if G.T. is sitting guard at the cat door, he will fly through the cat door and nab the bird before it has a chance to make it back through the wire. He then brings the bird inside the house which gets all 10 cats in a hunting tizzy and leaves feathers everywhere and one either very traumatized, or dead, bird depending upon how quickly I can catch it.

We've tried numerous cat/dog doors. We've had the locking type where the cats wear a magnet on their collar to unlock the flap, we've had the dual flap for insulation purposes, the rubber flap for ease of use. We also ordered one of the "guaranteed to fit your window" doors, which didn't fit our window. We keep going back to the Staywell doors, and my husband puts the door into a wooden fitting and inserts it into the window opening. I think this current door is a small dog door because most of our cats are about 15 lbs. or more.

Although this door does have a magnetic closure to prevent it from blowing open in the wind, it will do so when there is a strong wind. And it makes a "flap/flap" sound everytime a cat goes through it. Unless Jenny is going through it. Then it makes a "SMACK" sound because she just goes leaping through it in one bound and it's all done with.

The "benches" in the cage are sawhorses with boards attached. There is also a step-stool for Gatsbi to use so that she can get up onto one of the benches. The water bowl is a plant saucer.

So, the moral of this story is that the cats thoroughly enjoy their enclosure and it allows them the freedom to come and go as they choose. They don't care how it looks. They don't care what it's made from. And it gives us some peace of mind that we hopefully won't lose another cat to wacked out humans.

I love it! You are all so lucky. I wish I had a place to just relax outside but I've never been allowed out without harness or the stroller or being held.

Thanks fer all the great info!

That sure is a neat place to hang out! It's nice you all can go in & out as you please.
We are not sure we want to hear the story of Davy the White Panther. It sounds sad & scary.

Oh you are furry lucky to have such an enclosure. One thing Momma always wanted in a townhouse or house was either a screen porch or a balcony so that we could go outside and not be able to just run wild.

I like seeing the enclosure from another angle. How exciting that sometimes birds can get in there! And, I'll bet you can see BUGS in there too! WOW!

We asked mom if we cood haf one and she sed dat it wood get to cold if der wuz a cat flap to da outside cuz winters in Wisconsin can be brutal. Insted she wants a nice screen porch were she can relax too! Dad sez dat wood be good too! So, maybe a nice porch is in our fewsher!

Hey yer cage looks neerly the same as owrs, eksept your's is a bit bigger, and owrs has a cuvvered ofurr roof, cuz we git lots uv rain. We like it cuz it means we can go outdoors at night.

You obviously love your cats so much. It sounds like they have a great life with you and the Paw.

WOW! That is soooo cool. We want dad to build us one!

we wish the Lady would do that to our balcony, but then the neighbors would see us and tell the landlord and we'd get thrown out. someday maybe we won't have to hide all the time.

This is a great idea. I would love to have something like this in our neighborhood but the home owners association would never allow it.
I would think that sometime in the future you could make the screen with a smaller openings so birds and such won't get in. This is a great thing.
here we have a few neighbors that have fancy screened porches and the kitties play on that all day. No grass or dirt but it is very expensive.

Wonderful. I am so glad this makes the kitties happy

Very nice, you have beans who are handy enough to build this for you.

I thoroughly enjoyed the story on the "enclosure" and how it was made and fortified. Cats look like they really like it. And they even get a bird or two. I have a dog run in the back yard and I let our cats out there but I have to keep an eye on them while they are out there. Patches and Cleo jump the fence but they come right back over. I let them stay out about a half hour then they come back in. I like your set up as you can let come and go as they please. Well, all you forty paws enjoy.

Wow is all I can say. That just looks like so much fun!

Oh, I'm SOOO jealous! I have to be on a harness. I'd love to come and go as I please. What a neat place!
Tara

Oh what a Grand Idea. Now the human husbandman has a new spring project... this is a great idea.

The Bad Kitty Cats are always in and out and this would stop the worry!

Like Annie, our Riot loves to play the front door back door game!

Happy St Patricks to you all! Purrs

That is a wonderful enclosure. :) Your cats are all very lucky to have you, Maw, and Paw too.

Since I have no fur, I wouldn't be allowed outside unsupervised, even with a cool enclosure like that, but I can see how it would be absolutely wonderful for other cats.

You have built a wonderful enclosure for the cats. I think it's great that they can go in and out as they please and still be safe.

I love the enclosure! Who was the 'evil intruder'? Was it another cat?!

That's really neat! My beans went to a pumpkin farm where they had a "catty shack": a chicken coup conferted fur kittens. BUT they made it wif wire mesh that had big holes an the kittens got out. So they ofur lapped it to keep the kittens in, cept fur the top. "Kittens won't climb to the top" they sed.

Mom rescued a kitten frum the top of the Catty Shack an put it back in cuz the kids were all worried. She tolded a lady in charge, an she asked, "Was it the black one? He's the trouble-maker." !!!

*kitty applause* fabulous, just fabulous. I'm sorry to hear that such a great idea came from the tragedy of losing your Davy, but maybe some other kitty parents will build them somthing similar so their cats can "go out" safely. I wish I could have one. Thanks for sharing more about it.
I'm sure Davy's story will be sad, but please share it as it might enourage others to keep their cats inside. If you can do it with 10 cats, surely others can do it with a less....

That is so great for you guys. Momma won't allow us outside period, and that is that. Except Mistrie and she hangs around by the house, never ventures out to the road. She is too busy watching for us throught the padio door or sleeping under the deck.