1. The Okapi is native to the Ituri rainforests in the north east of the Democratic Republic of the Congo and was known only to the local people until 1901 when it was discovered by Sir Harry Johnston. It is pronounced "o-copy".

2. The Okapi became officially recognized as the Okapi Johnstoni in 1902.

3. The Okapi is the emblem for the International Society of Crytopzoology that was founded in 1982 to document and evaluate science of unverified animals.

4. It is classified in the phylum Chordata, subphylum Vertebrata, class Mammalia, order Artiodactyla, family Giraffidae. It is NOT related to the zebra.

5. The male possesses small horns on his forehead, similar to the giraffe. The horns are covered with skin that is never shed.

6. The Okapi's tongue is 13" long and it uses it to pull leaves and shoots off tree limbs. It can also clean its ears, nose and eyes with it. 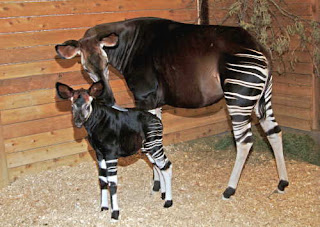 8. The Okapi is part of the Species Survival Plan (SSP) which is overseen by the Association of Zoos and Aquariums (AZA), where member zoos across North America cooperate to produce offspring of threatened or endangered animals.

9. Okapi are ruminants, meaning they have a multi-chambered stomach and chew their cud like cows do. They are also ungulates, or hoofed, animals.

10. Here is a picture of one of the Okapi that Maw used to study as a Research Aide at the Dallas Zoo. The research was non-invasive, meaning they did nothing directly to the animal, only observed its activities and recorded those activities at certain timed intervals. The majority of Okapi studies have been conducted in a zoological setting because of the reclusiveness of the Okapi in its natural habitat of the dense rainforests. It is a solitary animal as well, and only comes together for mating, or when the mother is caring for her calf. She typically cares for a calf until 2-3 years of age, although it is weaned at about 6 months of age. 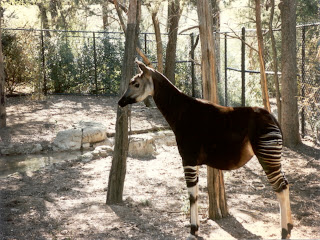 11. Here is a picture of one of the babies that was born at the Dallas Zoo during the time Maw was a Research Aide. The Okapi moms tend to leave their babies on nests of limbs and leaves in the wild for long periods to go off foraging for leaves and grasses. In a zoo setting, the mom would have 2 stalls in the barn and would leave her baby on a bed of hay while she went to the other stall to graze. Also, from extensive research from studying the Okapi in zoo settings, it has been determined that the babies do not defecate for the first 50-60 days of their lives. This is believed to be a survival mechanism so that their natural predator, the leopard, can't readily find the nesting baby. 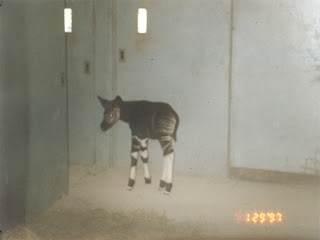 12. The Dallas Zoo has been very successful at breeding the Okapi. One of the reasons is that they have trained the females to "pee in a cup" during their morning feeding of hot oatmeal. The Okapi love love love hot oatmeal for breakfast. So, the Zoo Keepers make up HUGE batches of oatmeal to give to the Okapi every morning. The Keeper holds a cup on a very long pole under the Okapi's tail and she will urinate, then the Keeper dumps a big glop of warm oatmeal in their food pan as a reward. The urine is analyzed to determine when the females are in estrus.

13. Here is a picture that appeared in the Dallas Morning News of L-Jawar and John, the lead Okapi keeper back in 1996. The caption says that L-Jawar was hand-raised, so his mother must have rejected him. This would also explain why L-Jawar was so comfortable with John handling him. Most of the Okapi were naturally skittish around humans. 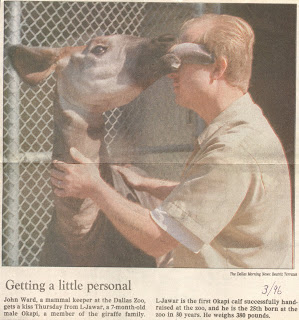 Oh, I love the Okapis. They are very cute. I like their long tongues. I wish I could clean my nose and ears with my tongue!

They are funny to like oatmeal. It must be good for them, too.

Wow, I learned a lot today! Okapi are very cute. :) It sounds like your Maw did some interesting research! Cool that they love oatmeal. :)

We never saw an Okapi before. They are very cool looking. We wonder if we like oatmeal. Mooommm!

We like to try new foods. Yesterday Riley tried some almond milk. It was good!

Thanks so much for the Okapi information! I bet your Maw took good care of the animals there!

That was fascinating! My Mommy wants to know if being Giraffidea means that they're related to the Giraffe? I know I spelled that wrong, if I don't have spell check or a dictionary handy, I'm terrible. But what I meant to say is that the Okapi has many similar trates. Thanks for the lesson, I enjoyed it!

yu really gots lots of info there guys! we like the ways the okapi's look. we thots they wuz like anti-lopes so we wuz surprised to lern they is from the giraffe familee. ans we lerned they is shy too.

Doze is furry kewl looking aminals. We can't imagine peeing in a cup fur anyfing! Dis is sooo ejucashunal. Will der be a test on dis stuff? We will be sher to study hard.

cool! We have one at the Cincinnati zoo and it had a baby too. Mommy & Daddy saw it at "Zoo Babies"
Very cute. I'm taking notes for the quiz!

I'm not peeing in a cup for anyone, no way, no how.

What a big ole tongue he has!! But he needs to decide what kind of animal he is going to be 'cause he looks like a combination of 3 or 4.

Okabi are really, really cute. I like their stripey legs.
Love,
Tazo

We think they are really sweet looking and friendly too. nice colors awwwww we love them

Is there such a thing as an O-copy-cat?

Pee Ess: The man in the bloo shorts delivered a box on Munday that came all the way frum Texus but Momma hazn't been able to post the pikshurs she took yet. She werks too much!

We nefur heered about Okapis afore. They am furry intresting. That was a good intresting thursday thirteen you wrote about.

I had never heard of these cute little critters either! That was very interesting...although I'm not sure bout the peeing in a cup idea...
Tara

I want my own Okapi! Can I have one?

These animals are beautiful and have lovely legs. I have asked the humans if we can get one for our garden - but they said "No". FAZ

They're NOT related to zebras??? Then where did they get their stripes furom?

I had nefur seed a striped horsie a'fore and nefur heard of a okapi! I learnt a lot today.