Here is a closeup of Orinch's face. Isn't he a cute liddle bugger? If you look really close, you can see his bits under his tail. He's a BIG Man Cat!!! 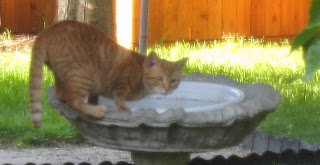 We don't want to lead you astray in thinking that we are going to foster him and find him a home. We don't do that anymore. We're no longer with the group we were with for 3 years, and we gave up on fostering when we reached 10 poodins. We ended up keeping too many special needs cats and the ones we grew too attached to.

Orinch might belong to a neighbor who hasn't fixed him, we just don't know. But we're going to "fix" him so that he can't make babies. We don't think he has a family, because he was really skinny when he first started coming into our yard this winter.

Also, we have discovered that we have flying ants, not swarming termites which makes us extremely happy!!! Yippee Skippee!!!

And, in other noos, some "experts" say we are out of the drought, although the lake that supplies water to this county is still 6 feet below normal. Most cities in this county are still under mandatory Stage 3 Drought Restrictions which means automatic lawn watering restricted to one day a week, soaker hoses around foundations can be run 1 hour per day, no car washing, or runoff from yards allowed. And many cities impose a surcharge on water usage above maybe 15,000 gallons, or 20,000 gallons per month. Depending on your city. So we are very grateful that we have been receiving some very good, soaking rains once a week the last few weeks. The "experts" had predicted a dryer, and warmer, spring than normal. Of course, we still have 2 months of spring to go, so we aren't counting our gallons before they fall from the sky!!!

As we mentioned last week, foundations need to be watered here. Most foundations are cement slabs. Basements are rare here, although modern technology and money are building some basements in the multi-million dollar homes. The reason basements are rare is because when the ground contracts as it drys, the basements would cave in. Not a pleasant experience for the homeowner. Neither are shifting foundations which happens when the ground becomes so dry that is contracts. And then when we have soaking rains, it expands. So, when it contracts and the foundation begins shifting, doors begin to stick, and walls begin to crack and pull apart. I've been in homes where there were 2 inch gaps between the walls and the ceilings, or in the walls connecting rooms. Foundation problems cost thousands of dollars to repair. Sometimes it can all be done externally, and sometimes they have to come in and rip up the flooring and drill into the concrete slab and "do stuff". Don't know what it is they do, but it's a mess!!! So, last year during the hottest months of the year, there weren't soaker hoses to be found in stores and home improvement centers.

Having grown up in Indiana, and living 10 years in Omaha, NE, these types of issues were unknown to me.

I think its great you are going to take away his hoo-ha's! It is very interesting to learn about your area and the houses. We live near a BIG river and have water come into our basement sometimes. I'm glad they're ants! Actually my Auntie V found a mound of those ants and thought they were termites too.

We've never heard of that either. Of course we live in the Pacific Northwest!

We have a drought here, too. My Mommie says they are only allowed to water the lawn on Tuesdays and Sundays. We haven't had rain in a long time.

I am glad you do not have termites!

New Mexico is still under drought restrictions as well, though we had a wetter winter than we have had in a long time. I didn't know about the ground getting so dry that it could wreck the foundations of a house. I'm glad you've got ants and not termites. I am also glad that you are giving Orinch Cat a hoo-haectomy. I understand why you can't foster cats any more and I hope he finds a forever home somewhere. Thank you for dropping by my blog and wishing me well. My toes feel a lot better now.

Orinch does have a sweet face. You are very kind and wonderful to be planning on getting him fixed, that way he won't be a daddy to any unwanted kittens. I hope that someone will take him in. I certainly understand why you can't foster (just like we can't because of my dad's cat allergies.)

All that house stuff sounds horrible! I'm glad you don't have termites.

We can't have basements because we are too much water in the soil, except right now we don't...we is having one bad drought. IT is horrible. I grew up here in Northern Florida and am accustomed to rain in the afternoon. We haven't had rain in months and months. I had to complain because as soon as I do we'll get a CAT5 hurricane and I am already worried enough about the prospects this summer..
Abby

I'm glad you're gonna take his walnuts. That's a very good thing. I left my walnuts at the vet this past February and even though it confused me some right afterward not to have 'em anymore, I don't miss 'em one bit, hehehe.

Kittyhugs and purrs to efurryone!

We're finally breaking our drought, it's not nearly as bad as yours though. My Grandma and Grandpabean live in Souther Louisiana and believe it or not, for all their humidity, they're still having a drought. I'm glad that it's improving where you are.

I still say you are wonderful people, no unwanted kittens! Hurrah for you!

Orinch duz haf a sweet face, but we agree wiv yoo. Yoo haf to stop sumwhere or theer won't be enny room left furr yoo. We're glad yer termites turned into ants as long as it's not those fire ants.We hafn't had enny rain here hardly furr the last month which is furry unyooshull furr us, but the winter wuz the wettest we can remember. We can't imajin not gitting rain furr munfs on end.

Happy Tuesday to you too, Forty Paws!
The Orinch cat sure does have a cute face!
Texas sounds like a very intresting place to live in, and I've had fun learnin about it.
I am also looking forward to your Thursday 13 this week!!

We have enough rain so far...
Orinch cat is very beautiful. I hope you find a good living situation for him. Sometimes mommie wishes she could live out in the country and have a zillion kitties... but she would be so busy she would never be able to figureskate.

I hope you get some rain soon.
We really enjoyed reading this.
We love your bloggie
<3

Oh and the termites... very scary. we are thrilled that you do not have termites. eeeek and very distructive and then you have to get the chemical man come out... also scary

That's great news that you don't have termites, just those pesky flying ants.

Good idea to give orinch cat a hoohaectomy. Ders too many homeless baby cats as it is. Glad yoo don't gots turdmites. Are yoo sher der not carpenter ants? Yes, Zippy drove mom's car into the garage. It's a funny story now, wasn't so funny when it happened. Mom's gonna look fur da pikshers and tell about it on our blog one of these days.

Around Your Wrist said...

you can have some of our rain. it seems to never stop. i try not to mind, but it does get to me after awhile. how's a kitty supposed to nap in the sun if there's no sun?

like everyone else, i'm glad the bugs aren't termites. still, they're bugs. good luck!

Watering basements is pretty strange I must say. I'm really glad you don't have termites, and so nice of you to take care of Orinch.
Tara

When we say drought around here, it's nothing like what other parts of the country experience. We can't imagine having to water your foundation. We learn lots of things on these blogs to tell our mom and dad.

You're very good to cute Orinch. And you have done enough--ten is a lot. We both think that two is too many!