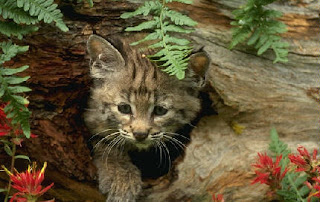 Wow, this is fantastic and very interesting. Now I know everything there is to know about Bobby the Bob Cat - I'm studying and studying so I am ready for the Quiz. I always wondered what crepuscular meant and also that bit about vomeronasal organ explains a lot. Thank you bit time. FAZ

That was a lot of things to learn about Bobcats! We wonder if our Meowmie is named after a Bob Cat.
~Gracie of The Bunch

Bobcats are very impressive! I liked learning about them. Too bad they don't live very long. Sometimes I do the flehmen response when I smell Pixie's behind.

I studied hard so I can do well, in case there is a quiz!

We do that response when we sniff where a poopie butt sat on the floor.
Bobcats is vishus!!!!

Wild cats are very very cool. They do some amazing stuff and are really interesting to learn more about.

That pixchur of the baby bobcat is sure koot. Boy, I learned a lot about koot bobcats!

Ooo, bobcats is intristing. We do dat flehmen thing when we sniff each others butts too! We'z gonna study now so we can do good on da possibul test. What mom? Oh, I gess so. Mom sez yoo can lern frum getting da wrong answers too.

Bobcats are so cool! I am ready for the quiz!

I don't think you should doubt the integrity of my tunnel. In the extremely unlikely event of a tornado, it's just as safe in there than anywhere else in the apartment! We have a lot of windows.

Big cats and house cats are all members of the Family Felidae. They split off at Genus. All cats are considered the MOST carnivorous of all the animals falling under the Order Carnivora.

Also, this is pretty cool. Straight from Wikipedia: The Bobcat is believed to be evolved from the Eurasian Lynx which crossed into North America by way of the Bering land bridge during the Pleistocene. The first wave moved into the southern portion of North America, which was soon cut off from the north by glaciers. This population evolved into modern Bobcats around 20,000 years ago. A second population arrived from Asia and settled in the north, creating the modern Canadian Lynx.

Well, I asked mom bout haffing delicate curtains and she sed dat dey haf been there for 11 years thru 4 cats and 2 dogs and no one effer messed dem up until me. Gess I'm just more talented den dem others *snicker*~Speedy

Those bobcats are very interesting. Thank-you for telling us more about them!

Zoey and the furballs said...

That was quite fascinating. I didn't know what the flehmen behavior was but I've done it and seen Gus do it too. It's nice to know that.