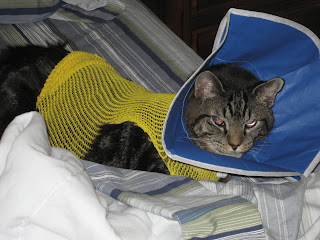 Thank you for all your wonderful messages and kind thoughts yesterday. We all appreciated them so much!

So here is Dorf this morning in his new get-up from the Vet Dentist. (Yes, his eyes really do look that weird. I think he is still high from all the meds.) This time she inserted a feeding tube in his neck and I have to give him 45ml of canned a/d 4 times a day (he's a big boy at 17 lbs.), and also give him his antibiotics through this tube. There is a bandage around his neck to hold the feeding tube at the suture site, and then he has this butt-ugly "sweater" thing that he wears to keep the feeding tube pinned against his body so it doesn't flop around and he can't pull it out. Sorry Daisy, but we think the Fashionista Police would cite you for wearing something like this. It isn't "cute" in any form of the word.

I personally think this "sweater" looks like a he-man shirt that a beer-bellied hillbilly would wear to a family reunion. But that's for another day....

Anyway, there is a certain protocol to using a feeding tube, which I've never done before. I've force fed hamsters, buns, guinea pigs, and poodins with syringes in the mouth, but never via a feeding tube. I have to inject 5ml of water initially before I start feeding, then feed half the food, inject 3ml of water, then inject his liquid antibiotic, then the rest of his food, then another 5ml of water to clean the tube out so it doesn't get clogged with food. This whole procedure is supposed to take less than a minute because I should be inserting about 1ml per second. All while Dorf is raised to a certain degree, not lying down. Wouldn't you know that Paw is in Catifornia this week?

Don't know why Dorf didn't get the feeding tube the first 2 times he had teeth extracted. Getting him to eat has been the biggest hurdle each time. He wants his crunchies regardless of how much his mouth hurts. He doesn't want his crunchies moistened. He doesn't want stinky goodness. He doesn't like tuna, or any kind of bean food except for yogurt and shredded sharp cheddar cheese. But when he was recovering, all he wanted were his hard crunchies, and he isn't supposed to have hard crunchies for 2 weeks after surgery. This time he doesn't have a choice.

He had his remaining 11 teeth extracted. The Vet Dentist said that if he were only having one or two succumb to Feline Odontoclastic Resorptive Lesions at a time, then she wouldn't take them all, but since he has had so many bad teeth over the last 10 months, she would just take the rest out. Once she performed the digital x-rays, she discovered that his remaining upper canine had an oronasal fistula, which I think means that the lesion had eaten through to the nasal cavity and she had to repair that.

Hopefully, Dorf will recover quickly from all this and go on to live a painless, carefree life. Cats don't have trouble eating without any teeth because they have a very hard palate and they can crunch hard foods with their gums and mouth. Their teeth were designed for tearing and shredding meats from bones, and the little crunchies that we feed them nowadays are usually eaten whole. (Trust me, I've cleaned up enough yak to know this is true.)

Please continue sending your healing thoughts and purrayers and purrs and headbutts for Dorfie.

I was just saying that your mom is super-human so I'm sure she'll do a great job taking care of you on her own. I'm glad all of the bad teeth are out!!

Dorf your mom is so great that taking care of you. Hope that you recovery soon.

Poor Dorf. :( I am keeping you in my prayers and sending lots of healing purrs your way. Your maw is wonderful to take such good care of you.

My mom can also vouch for the fact that most crunchies get eaten whole. Both the one who came before me, and me, have a tendency to eat crunchies too fast, so that they come back up once they swell in the belly.

I hope you heal quickly Dorf!

Sweet Dorfie Love.....You bring tears to moms eyes looking so pitiful in your alien getup. Seriously, we are sad that you are going through this but happy at the same time that you hopefully won't have pain and problems any more and very thankful that your mom is such a kind loving woman to care for you like this.

Oh Dorfie! I am so sorry you have had such a bad time. I hope now that you have no more teeths, you will never have this problem again, and you will always be happy and feeling fine. I am still purring for you to feel better quickly.

ps: I think your yellow sweater is nice, even though that style went out last season.

Dorf, we are very sorry you have to go through this, but at least with no more teeth, you'll never have to do this again. Hang in there, buddy!

Wow Dorf, that is some medication you are on! Good luck to your super Mom taking care of you but we know that you will be fine & hopefully pain free very soon.

Your outfit is function before fashion but the yellow is kind of cheery!

Mookie, Chaiyah, and the Human Pet

Maw: you are an angel here on earth.

Dorfie: we love you, even in your hillbilly cable dish get up. Can you pick up Animal Planet in that thing?

Our thoughts & purrs & prayers go out to both of you!
♥
daphne, chloe, spooker, jazper, and not the mama
♥

Dorfie, my man. Once you're feeling better, you're gonna have to remember to destroy all copies of that picture. It makes you look like some sort of drug-addled street hustler. Probably not the image you're used to. :-)

Sending comforting purrss to Dorf, and a big {{hug}} for Maw, who probably feel worse than Dorf right now.

Dorfie, you're my hero. I hope the pain goes away really quickly and tht you understand that the feeding tube is for your own good in the end. Just think of how good you'll feel once your mouth doesn't hurt any more at all. I'm sure you're going to be the cutest toothless cat on the block. It bound to get losts of sympathy from the babes. I showed your yellow muscle shirt to my sis, Cookie and she nearly fainted with delight. She's not one to follow the fashion trends. She thought your collar was a cool fabric necklace. That's my sis.

Tyler's mom: I wish I lived closer in order to give you a hand. He's lucky to have a family who's willing to do what it takes and not just get rid of him because of the cost or the work.
And young man, my Kali only likes crunchies and they have to be crunchy too. When you're a cat there's no use in pretending you like something when you don't. Rest well and don't blame Maw, ok Dorfie? She would have never choosen this for you.

Oh Dorfie, we hope that you get better really fast. Then you won't have to wear that sweater and that necklace and you will get to have crunchie time again! We are sending over lots of purrs and prayers for you and also, especially to Maw who is taking such good care of you!

oh no! we're sending lots and lots of purrs - we sure hope you're feeling great really fast. you know, I've had that same look on my face a time or two, usually when I'm planning to draw blood from some human hand. we sure hope you get your crunchies back soon. I know we don't need teeth to chew crunchies because my sister Midnight never chews anything (even though she's got lotsa teeth) and when she yaks it up it's pretty much the same as before she ate it the first time. I usually help her eat it again, and sometimes Cocoa joins in too.
Grr

Glad that Dorfie underwent the procedure successfully. Hope the postop period is free from any pain and infection and the recovery is quick and complete. Many prayers and love for the cute Dorf :)

Dorfie doesn't look like a beer-bellied hillbilly! Mommy laughed and laughed at that one! We will keep thinkin' good thoughts for our special guy. It's good that you can feed him like that - it must make it less stressful for him and you! Although I am sure he'd rather be collarless!
Smooches to Dorfie! And Maw, you are the bestest!

Dorf get better soon. Hope that since they took so many teeth you won't have to do this again. Mum agrees that we eat our food whole. She had a small pile to clean up from me this morning.

The tube routine is pretty standard. Break up what you are putting in, keep it clear with saline. That way the line will be good for the entire time you need it.

Thank you for the update on Dorf - we've been thinking about him all day. We're still purring and sending lots of pawsitive thoughts and purrayers and woofs and hugs to all of you. Momma wishes she lived close so she could help you with the tube - it sounds like a two person job for sure.

Hang in there, Dorf ... soon this will just be a memory that you can decide to forget. I hope you feel much better after this is all over.

Thinking the bestest thoughts for you,
Luxie

Ah, Dorf, you look a little strange, but I'm sure that things will be much better for you soon. Hang in there, guy, and you will be back to normal before you know it. Maw, you are an angel to do whatever it takes to keep your fur babies healthy.

Smeagol and Strider, Mystery (Sunnin' at the Bridge) and Gizmo too! said...

We're sendin' purrs and purrayers for Dorf and for Maw too, for takin' such good care of efurryone!!

oh Dorf, remember, just like HeMan you "have the poweeeeeerrrrrrrr!!" to get all better soon.

We're sending you lotsa purrs and prayers (and to your family too!) that you recover quickly.

Take care buddy and know you're very much loved by your family and your online family. I'll give you a Mancat hug when you're all better. I don't want to jostle you now.

Oh Dorf - get well soon! Nice necklace by the way.

Fortypaws - you have all been tagged! Come see the 7/26 post on my blog for details! http://blissandvinegar.wordpress.com.

Oh yeah, and clip those nails.

Poor Dorf! Your right, he looks kinda goofy in that picture, those meds must be doozys!!