Update on Dorf and Udder Noos 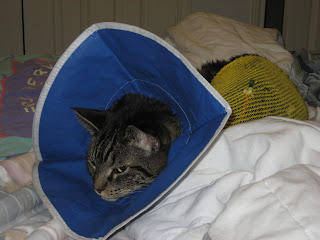 Fank u efurrybody fur wishing owr Paw a Happy Purrfday!!! He ist a grate Paw an we lufs him lotz. We git furry upset wen he gits dat black sootkase wid da weels owt an starts puddin stuff in it. Speshully Annie. She ist a Daddy's gurl. Anyway, he be bak tonite an he gitz da rest of his Purrfday Prezzies. Mebbe he will alreddy be dun wid hiz Harry Potter book we gaved him early so heze culd take it wid him on da silver bullit dat flies.

Maw here: I made a major screw-up yesterday while feeding Dorf. Instead of eye-balling the water I added to the a/d, I decided to use the instructions that the vet gave me which calls for 5ml of water to 1 can of a/d. So I started inserting this mixture into the feeding tube. Any of you who have ever used a syringe for feeding knows how the rubber starts sticking after so many uses. Well, it was getting a little sticky, and I was pushing the food in and having a lot of trouble. Next thing I know, I see the food coming out the incision in Dorf's neck where the feeding tube is inserted!!! Great.

So this is how I discovered that Dorf wanted to eat on his own (as long as I held the spoon up to his mouth like I do with his yogurt). So he finished eating his 45ml of a/d, I called the vet, and off we went to get him looked at. They cleaned up his neck, put new bandages on, and took an x-ray to make sure the feeding tube was still in place and gave me stern directions on feeding and administering meds properly. Okey dokey. This is how I also discovered that eye-balling the amount of water that I added to the a/d worked much better than following the instructions...

So Dorf is essentially eating on his own as long as I spoon feed him his a/d, and I'm only administering meds via the feeding tube. He doesn't move a whole lot. I think that's because he's so trussed up that it is hard to move. His bandage around his neck is about 4 inches wide, then his sweater stretches over that, then his e-collar is on top of that. So he pretty much just lays in one spot.

I've also noticed that either his lips are swollen, or because he no longer has any teeth to hold them back they just kinda flop into his mouth. It kinda reminds me of my own Grandma when she would take out her teeth....

Email ThisBlogThis!Share to TwitterShare to FacebookShare to Pinterest
Labels: I feel like a Christmas Goose, Other Noos

Dorfie- good job eating on your own! i is so sorry that you still seem so miserable wif all that stuff attached to you. that really stinks. well, at least you won't efurr haf to go through this again. i'm 'posed to haf more teefs taked out sometime this year i think. mommy says my breaf is getting bad, so that's a sign that it might be sooner than later. - Miles

Well done Dorf, eating on your own and you are definitely looking very handsome in your Elizabethan collar. FAZ

Around Your Wrist said...

you've got a good v-e-t and a great maw, dorfie!

besides holding your feeding tube, i bet the sweater keeps your temperature a little more stable. when you're recovering from surgery, sometimes you can get a bit cold as your body works to heal itself.

lots and lots of healing purrs to you, dorfie friend!

Dorfie, it sounds like you are doing good! I am glad you are eating some on your own. Maybe you can get your mom to spoon feed you all the time! I am going to keep purring and purring for you until you are good as new. Only better. Because your bad teeths are gone.

Dorfie, we're keeping you in our hearts and thoughts. Great job on eating. WoW 17 lbs! You're 3 times bigger than Samantha! What a hunky ManCat!

Dorf, I am glad you are starting to feel better and eating on your own. I will continue to keep you in my prayers and send healing purrs your way. I hope you heal quickly!

We are glad you are eating with da spoon. You look so sad. We hope you feel better soon.

Dorfie, we're glad you're eating some on your own now!
So, you gettin' good reception with that thing? Now that you're feeling a bit better, is it time for a Meerkat Manor Marathon?

luv,
Not The Mama
and the gang from Purrchance to Dream

Oh geez!! I think my mamma would have passed out at seein the foods come out in the wrong part!
Dorf, hang in there little buddy! Way to go on being spoon fed!

Dear Dorfie. You look very cool in that handsome collar. WE are so happy to hear this news on your painful and stressful ordeal! We have been purring for you like crazy!

Hang tough. You are loved <3

C+P's mom here: can they change the tubing? that is not good that it is getting sticky already.

Poor thing. (((BIGHugs))) to all of you.
Some days I feel like I am working in a nursing home. actually... wouldn't this be a great job? just take care of cute old kitties all day?
<3

Won't this be great when it's just a distant memory. Dorf seems to be a real trooper. Great job eating from a spoon! Hope you feel better every day!
Love,
Tyler

Happy Belated Birfday to your Paw!

We're glad to hear that Dorf is doing well. Keep on eating, Dorf! We hope your mouth feels better soon.

oh my. you poor thing! just oh my. that's all i can think of.

Dorf knows you are there for him and you are just trying to help when stuff like that goes wrong. Our mom would have panicked big time with the food coming out of his neck!!
Greet Paw for us when he gets home!

Oh boy, how scary for your mom! I'm glad he's eating on his own! I think his lips should go down when all of this gets past him. Keep up the good work Dorf!

Now I know what you mean. I was giving Caesar the Lactulose with a syringe like that. yes, I know the sticky.
Ask them to please give you a zillion syringes. Jeeesh, it is not like they cost $50 a piece or anything... besides, didn't the surgery already clean your wallet out? :-)

I hope this week-end is a good one for sweet Dorfpuss.
Presently I am taking care of three neighbors kitties while they are away on vacation. I love it...

Donny and Marie and Casey said...

Dorfie! We are so happy that you are feeling much better than you can eat! Keep on eatin'

We hadn't stopped by in a while and just read about Dorf and his ordeal. He actually looks kinda cute in his blue daffodil collar. We wish him well!

That's what I had to do with Sadie after her dental, spoon feedings. Poor Dorf, all that extra stuff on him must feel like he's being held down and I would imagine his mouth doesn't feel to good.

Hang in there, Dorf - sending you some love!

Dorfie, happy to see you, you will recover of that.

I'm glad that Dorf is able to eat on his own out of a spoon now. The food coming out of the incision must have been really icky. I hope his mouth gets to feeling better soon. I think you are right about his not moving much because he feels so confined.

Hi Dorfie, we's happy you're gettin better. I don't fink I've move lots wif that cone on neither and all. It's grate you like to eat out of your spoon now. Boni luvs to eat out of a spooon too, specially yogurt! We'll keep sending you purrs til you're all way better.
PURRRRRRRRRS!
Sanjee, Boni Maroni, Mini, Pepi and Gree

Pee Ess. Mommy sez to tell you that floppy lips can happen after mouf surgeries until the nerves get all straightened out. She had floppy lips on one side after she had her bad abcessed toof taken out, but it got better.