Here's Jenny, relaxing after eating her morning stinky goodness. Jenny was an honest to goodness feral who was trapped when she was between 3 and 4 months of age. She lived with a colony of cats under an old woman's house next to a Taco Bell and the old woman fed them, but they also ate from the Taco Bell dumpster. When the old woman passed away, a rescue group began trapping the cats and moved them or found them homes. Jenny is still extremely skittish and we really can't do anything with her, so she just exists here. She's always been really healthy which is a good thing for her, since she would never let us medicate her. She's only been to the vet maybe 3 or 4 times in her 13 years of living here because it's very hard to catch her.

Someone asked the other day if Jenny has a tabby tail. Yes, she has a tabby tail, and a tabby spot on the back of one of her hind legs, and then the tabby bit on top of her head. Then the rest is all white.

She likes to play with Smokey, although she screams like she is being tortured when he chases her. She has always been very close to Bow, since Bow was the only other poodin here when she came to live with us. 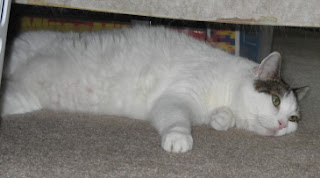 She has a really sweet face. Lucky girl to have been rescued and adopted by you'ns. Hi, Jenny!

P.S. I don't think I'm AD-whatchamacallit-D; I think it's just my nature!

Jenny, you are very pretty. :) I'm glad you found a wonderful Forever Home after a rough start in life. I'm sorry that you are still skittish though. There's nothing like cuddles from your mom & dad!

You're beautiful Jenny! You're very fortunate to have such a good home and I hope you overcome your skittishness sometime. Dragonheart is right -- there's nothing like cuddles from your Mom and Dad!

Jenny, you're so beautiful. And so lucky to find a forever home.

Jenny is very lucky that she has a houseful of cats to let her exist in the house with you. Imagine what her life would be like if it weren't for you--I shudder.

She is a very lucky cat.

It makes me very happy that Jenny got rescued from her bad situation and now lives in paradise with you!

You are so pretty Jenny!

see mom? Jenny doesn't haf to go to the v-e-t all the time and SHE's healthy. it's the v-e-t that makes me sick and makes my teefs hert. yep. - Miles

Jenny, you are very pretty. I like all your white furs. How nice of your beans to rescue you and let you just be you!

We really enjoyed reading about our Sweet friendie Jenny. we love you and you are soo sooo sooo cute

Hi pretty Jenny! The boys in the family thinks you is very adorable. We likes your laid back look in this picture even if we knows there is an underlying lion waitings to come out! hehehe, definetly our kinda gal!

JENNY IS ADORABLE! My emowmie had an ex-feral cat once - Meowmie found him abandoned in a coal bunker, a little grey kitten all small and sickly he was, so she took him home, washed him down and lo and behold he was a beautiful white cat! Just white all over - blue eyes - but not deaf. Meowmie called him Trevor and he lived to the age of around 16 years, he was a nervous little thing all his life...but beautiful. Like Jenny.

Ah Jenny, you started out with such a hard life. It's understandable why you're still so shy. But you're a lucky girl now living in a house so full of love.