So here is our little conehead, Dorfie. He was temporarily out of his convalescence room and with the general population where there was lots of hissing, spitting, and general running around going on from the other cats who didn't like his appearance much. 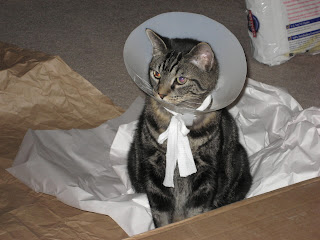 And here is our little conehead practicing daring feats of climbing, trying to imitate Daisy, the Circus Cat. 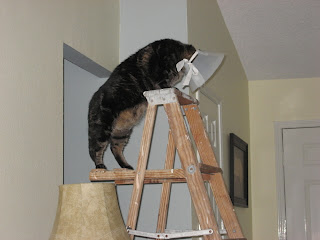 And here is our little conehead performing a dismount. 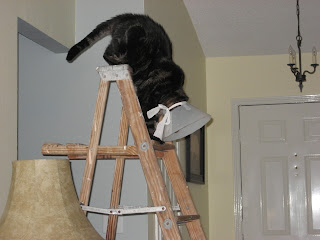 Maw has to say that she has had good experiences with contractors and companies. When she had the new privacy fence installed last year, they did a fantastic job and she was very pleased with the work and the workmen. And the year before when she had the new heating and a/c system installed, she was extremely pleased with the work, and the equipment they installed. As a matter of fact, last year when all her friends and neighbors' electric bills were doubling, our bill stayed the same as the previous year's bill which thrilled her and Paw to no end. And the new system does a much better job of keeping a constant temperature.

And the window company immediately agreed to pay to have the tub fixed. The guys who install their windows aren't subs, but full time employees. Most companies in the DFW area who have their own employees make that clear when dealing with them. They state up-front that they have their own employees, no subs, because it's really easy to go pick up day laborers from any of the various cities' Day Labor centers.

And when the delivery guys screwed up the vinyl flooring while installing the pedestals for the washer & dryer, Maw did have a very hard time getting reimbursement from the delivery company that Sears sub-contracted to. But after getting the Sears General Manager of the local store involved from where she purchased the items, things went very quickly and she got a full reimbursement for new flooring. She was also told that this delivery company was going to lose their nationwide contract because they had accumulated so many complaints against them in just 3 months of their year long contract. This made Maw happy. This was a year or so ago now, though.

But yeah, we agree with all of you who say that you try and do as much yourself as you can. Maw & Paw try to as well. It's just that they aren't as handy as a lot of your beans are, and Paw works 6 days a week. And the to-do list is always growing instead of shrinking....

But we'll let you all know how Angie's list for the DFW area works out. Maw bought a year's subscription to it.

Email ThisBlogThis!Share to TwitterShare to FacebookShare to Pinterest
Labels: Dorf

It's good to see you Dorf! Look at you climbing around. You must feel pretty good.

Dorfie, you are such a daredevil! You should join my Circus act! I sure am glad to see you feeling frisky.

Dorfie looks so cute with his little white bow. We are glad he is feeling better.

Oooh, it's so good to see that Dorf's feeling well enough to daring feats. He's very talented to do that with a cone. EG seemed to think his cone had amazing powers of paralysis.

It is so good to see Dorfie looking so good and acting so daredevilish. He has been through so much so it is nice to see he is getting back to normal.

wow dorfie honey, you are cute as a button in that, in fact the first pic looks like a cute little easter bonnet! what daring tricks you can do too! holy moley!

Dorf, that first picture of you makes you look very angelic - and almost like a bonnet tied with a bow around your neck. But, in a manly way.

I hope the to-do list starts to shrink soon!

Good to see a picture of you up & around Dorf!

Oh Dorfie, for meowing out loud... you are such a brave and risky tiger... even with that annoying collar on.

We love you and we are so happy that you are feeling better.

Mommie says that actually.... Doctors offices should not charge for a no show. It is tacky. If they actually do charge you... you should shame them by writing a letter to the newspaper. It is almost illegal to charge someone for being a no show.... Now if they are running behind and see you 45 minutes later than your actual appointment, can you get a "rebate" or charge them?

Okay okay okay mommie... get off of here!


happy week-end to all of you!! Purrrrrs, Princess

Its ok, we's understand about the DIY not happening. Our momma is very not handy and very busy most times. If she hads extra money she'd hire someone toos.

~Hunter & Napoleon~
P.S. we admire the sillyness of the cone, without expressly saying we approve of the use of the cone...poor Dorf.

Dorf! Honey, baby, sweetie! I have missed you and I'm glad to see you again in all of your adoreableness! It sounds as though you guys have had a week like we have...

Hi Dorfie, we're glad to see yer gitting around ok and looking a lot better than the uvver pikchur we saw of yoo. tell yer Maw we're glad the company paid furr the tub too.

What an adorable conehead :)

I am amazed at how daring and balanced Dorf is, especially with that thing on his neck!

It is really good to see you feeling so much better, Dorfie! You are very daring to do all that climbing with your cone on. I am really glad that the window company will pay for the tub damage.

We were amazed that you can climb a ladder with a cone on, Dorfie! But it is very nice to see you again!

Yeah, dad kinda slowed waaaaay down on da DIY and mom can't do it all herself. Der may be more workmen in our future! Dorf, yoo are adorable in yoor cone wif da little bow tied around yoo...When Zippy had one of those she woodent effun move, she ended up not waring it.

Ah Dorfie, I feel for you. Are you feeing better though? Maw, sounds like you've been working hard to fight for your rights. Good for you!