Maw is too busy today to do a TT, so she borrowed these questions from an email that was sent to her.


But here is a lovely picture of Obi in our new cubes that Maw bought to celebrate Dorfie having no more teeth. 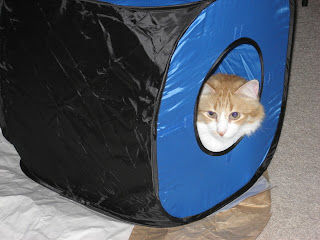 And now, without further ado, here are the questions:


Can you cry under water?

How important does a person have to be before they are considered assassinated instead of just murdered?

Why do you have to "put your two cents in".. but it's only a "penny for your thoughts"? Where's that extra penny going to?

Once you're in heaven, do you get stuck wearing the clothes you were buried in for eternity?

Why does a round pizza come in a square box?

What disease did cured ham actually have?

How is it that we put man on the moon before we figured out it would be a good idea to put wheels on luggage?

Why is it that people say they "slept like a baby" when babies wake up like every two hours?

If a deaf person has to go to court, is it still called a hearing?

Why are you IN a movie, but you're ON TV?

Why do people pay to go up tall buildings and then put money in binoculars to look at things on the ground?

Why do doctors leave the room while you change? They're going to see you naked anyway.

Why is "bra" singular and "panties" plural?

Why do toasters always have a setting that burns the toast to a horrible crisp, which no decent human being would eat?

If Jimmy cracks corn and no one cares, why is there a stupid song about him?

Can a hearse carrying a corpse drive in the carpool lane ?

If the professor on Gilligan's Island can make a radio out of a coconut, why can't he fix a hole in a boat?

Why does Goofy stand erect while Pluto remains on all fours? They're both dogs!

If Wile E. Coyote had enough money to buy all that ACME crap, why didn't he just buy dinner?

If electricity comes from electrons, does morality come from morons?

Do the Alphabet song and Twinkle, Twinkle Little Star have the same tune?

Why did you just try singing the two songs above?

Did you ever notice that when you blow in a dog's face, he gets mad at you, but when you take him for a car ride, he sticks his head out the window?

Email ThisBlogThis!Share to TwitterShare to FacebookShare to Pinterest
Labels: Questions

Those are some very interesting points to ponder!

I am very happy you got those cubes! They are just like mine. I like when my Mommie hooks both of them together.

they are some furry inneresting fings to consider!! wow! i haf to ponder on dem a spell today.

Those are just plain silly, but thought provoking.

our Lady wuz gigglin' lots. she really liked that one 'bout Jimmy an his crakked corn 'cept fur the fact that now that stoopid song is stuck in her hed an she's always hated that song wif a pash-un.

that's a furry cute picshure. how many cubes didja get? or duz ya gotta share. if Grr or me wuz in the cube, Midnight wood pownce it. she's 'noying like that.
Cocoa

The cubes look like lots of fun. I hope Dorfie likes them, too. Those are all very good questions, but I'm afraid I don't have any answers.

those is great questions!! you has tents!! WOOOOOO HOOOOOOOOO.

Oh don't tell Miles that ham has a disease, it wood breaks his little heart.

What is Dorfie gonna be eatin now that he has no toofs?

I am glad he got a tent to share wif efurryone. Dat is a nice one too have lots of fun in.

wow, i was trying to answer some of these, but it just made my head hurt. i'm off to nap and ponder these....

PS how is Dorfie feeling?

Those questions made one of my ears go forward and the other backward!

I love my tents. If I get bored with them, Mom just moves them across the room. Then they look new!

those questions made my eyes go round and my tail twitch, meomwies eyeballs are bleeding too ;-)

Woww, those questions are very deep to me~!!

We tried and we tried but we can't annser dem kwechuns.
Obi looks furry kyoot in that cube, and we are glad Dorfie has finished all his treetment now. Mum sez one of the Befurrus Cats called Mother Puss nefurr had any teef and she would attack big bones and git all the meat off better than any of the uvver cats. Mum yoosed to say she gummed the bones to death.
She couldn't stop laffin about what yoo sed about a bee stinging my bum. Sumtimes I roll around in the dirt and play wiv little stones and suddenly I git up and run at 100 miles an hour. I don't know why I do it, I just do.Yooshully I'm to fast furr her to git a pikchur.
Wish yer Maw a furry Happy Purrfday furrom all of us.

You made my little kitty brain get a bruise! But you made Mommy laugh! And never joke about HAM! HAM! can't have a disease! Nope, never!

Dorf, are you feeling all better? The cubes are a nice payoff.

And I loved those questions.. which I am going to think about as I get ready for my nap.