Today is our Maw & Paw's 9th wedding anniversary!!! We sent Maw these beeyoutimus flowers. The man in the jean shorts delivered them (FedEx). 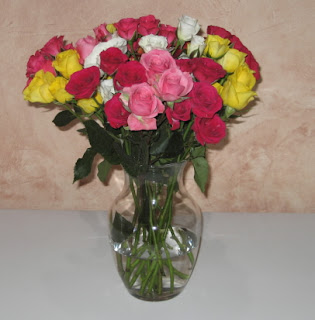 Maw & Paw were married on the island of Kauai, Hawaii, on a private estate on the autumnal equinox on a Wednesday. They had a "New Age" type ceremony and the witnesses were the photographer and the Hawaiian guitarist.

Maw bought her gown in Colchester, England; the city that Paw is from. She carried it on board back to DFW, (and had to pay a big duty). Then she had it altered, and then carried it on board to Hawaii from DFW. The flight attendents kept opening up the gown bag and looking at it. Maw was skeert Paw would see it when they were doing this. Maw says she would have never tried this after 9/11 because of the crazy flying restrictions in place now. Nope.

Maw arranged the entire ceremony over the internet. She never talked to anyone in person. The gown pressing, the flowers, the vows, the photographer, guitarist, and cake were all arranged via emails and internet.

Paw was measured for his morning suit here in DFW, then it was ordered to be delivered to a tux shop on Kauai. That was kinda nerve racking because the man in the brown shorts was late delivering it on the day he was to be fitted.

But efurrything worked out totally perfect and they had a wonderful, private ceremony in one of the most beautiful settings in the world. 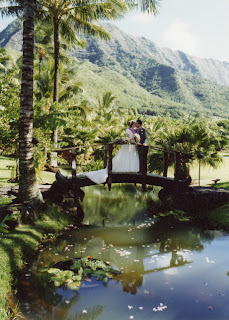 In other noos, Reno has won the 200th post contest at Eric & Flynn's!!! He is so furry iscited because he nefer wins anyting. Even when he's rasslin' his brudders and sisfur, they beat the snot out of him because he is smaller. So he is so happy!!!

And in even more noos! Last nite, we saw Orinch leap up to the bird feeder and snatch a morning dove right off the feeder and then run up a tree with it! It's not as if Orinch wasn't full, because he had just eaten his food on the back patio. We were all furry shocked, and saddened for the poor dove.

Happy Anniversary to your Maw and Paw! Those are some very, very beautiful roses. I'll bet they smell as pretty as they look.

My Mommie does almost everything on the internet too, but that is very adventurous to plan the whole wedding on-line. It sounds like it was a really special day, too.

hey there...first time visitor to your blog, I wanted to say hi. I'm an animal lover too!

Oh, and happy Anniversary as well.

maw's flours are furry bootiful! and i am happy for the 200th visiter purrize! that is furry good! whee! and since i am scairt of birds, i will haf to think abote the dove a little bit...

Happy Anniversary to your Maw and Paw! That sounds like a beautiful wedding!

Happy Annifursary to Maw and Paw!!!

Happy Anniversary to your Maw and Paw. Sounds like they had a fabulous wedding!

First of all Happy Anniversary to your Maw & Paw!!! What a pretty place!
RENO!!!!! You Won!!!!! Thats Awesome! And Orinch was just in it for the thrill of the hunt! Can't tame that wild side!!!!

A Hawaiian wedding, ow wonderful!!
Happy Anniversary! The maid will thin of you when she dances the hula today!
Congratulations Reno for winning Eric and Flynn's 200th post contest!

Happy Annie Versery to yer Maw and Paw. That is a byootyful pikchur of their wedding. It looks like Paradise. Yer Maw wuz furry brave to organise efurryfing on the innernets, our mum would haf been skeered she mite haf done sumfing wrong. Those flowers are gorjuss.
Well done Reno,we'll be sending yer pakkij on Wenzday (Mum has to git a cupple more fings furrst)

Aw Maw and Paw - Happy 9th, Mommy and Daddy have you beat by 6 months. Your wedding must ahve been breathtaking! Smooches to you!
Reno - buddy - Hooray!!!!!!!!
Good for you!
And to Orinch - you was just doing what we do - nature is what nature is...

Happy Anniversary to your mom and dad beans. Those are the prettiest flowers ever. They must reeeeeallllly be in love. That is so nice, isn't it?

Happy Anniversary To the 40 paws Maw & Paw. The wedding pichure is bery purrty.

we dont fink Orinchy meant any harm. He wasnt tryin to be mean. Owr neighbors cat Stumpy kawt a birdie up here once in front of owr beans. They gotted upset but knew he was a gud boy.

Happy anniversary to Maw and Paw! And congratulations to Reno, what exciting news.

That sounds like the most divine wedding ceremony (such a lovely place, MomBean tells me). Happy Anniversary, Maw & Paw!

Happy Anniversary to your Maw and Paw! :)

Happy anniversary to your beans. Sure looks pretty where they got married.

I love your post on why Obi is high maintance. You guys are funny.

Oh what beautiful flowers and what a gorgeous picture. Maw's dress was awesome. I agree with her, after 9/11 I wouldn't try that with a dress either. Wow .... congrats Reno!

Happy Anniversary to your maw and paw!

Wow, that was one romantic wedding!
And how beeeutiful are those flowers!
Congrats to Paw & Maw on their anniversary!
luv,
all of us kitties
@ Purrchance To Dream
and Not The Mama, too!

Happy Anniversary and here's to many many more. :)

oooh - how lovely! Happy Anniversary to Maw & Paw!!! and plus congratulations to Reno - way cool!