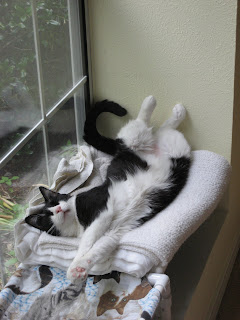 Reno was rushed to the V-E-T yesterday because he has a severe bladder infection. He was vomiting and squatting anyplace in the house as if he were constipated, but he was actually straining very hard to urinate. So he is staying at the vet for a few days since we really can't catch him to medicate him. He was in the crazy cat lady's garage longer than his siblings and is really intractable. That's why he is always first to get his claws trimmed on claw trimming weekend because if he finds out what is going on, he will run from us for the next 3 weeks. So we grab him when he is sound asleep and then trim his claws before anyone elses.

Also, Dorf is going to the ophthamologist today for his eyes. His eyes stay dilated and are kind of cloudy at times. I thought this was because of his teeth pain, and the vet dentist confirmed it, but now all his teeth are gone and his eyes are still not right. The regular V-E-T said that he isn't blind because he can track light correctly, but I still think something is wrong.

So we could use some hugs and healing purrs and headbutts and nosekisses around here if y'all don't mind.

You have just been sent a whole big hug full of hope and positive thoughts from Fred the Cat and me too. I hope everything goes well and we have good news soon.

Poor Reno and Dorf. :( I am purring and praying for both of them. I hope Reno's bladder infection clears up quickly and I hope Dorf's eyes are okay. Sending healing purrs out to Reno and Dorf.

Oh heavens! My best wishes and good vibes and purrs and crossed paws have all sorts of good will in them!

Will be thinking of Reno & Dorf today,
Luxie

Reno and Dorf, we are purrin and purrin for you both!

Pawsitive thoughts coming your way! You're SUCH a good mom.

Oh, poor Dorf and Reno. We're sending lots of hugs and purrs and purrayers your way.

Oh boy we'll crank up the purrs at our house for all of you!!

Well we will add you to our list of cats to purr for. I don't know that I will be able to do anything but purr today. That's okay. I like to purr.

We furry much want Reno and Dorf to feel better.

Oh gosh, dis is not good! We'z be saying purrayers for Reno and Dorf. And heres some purrs and headbutts fur ya...purrrrrrrrrrrrrr
We sure hope dat dey is both okay.

I hope Reno starts getting better soon. And that Dorf's visit shows nothing seriously wrong with him.

Oh Reno & Dorfie.......
We are sending healing and happy prayers out to you right away and we won't stop until you are all better. Hang in there Reno. It hurts, but the vet will make you feel much better soon.

Oh that is sad news. We know all about how scary bladder/urinary problems can be. I'll keep my paws crossed for you both!

Oh, we Ballicai are so sorry to hear that Reno and Dorf aren't feelin' good! We'll be purrin and purrin that they are feelin bettur furry soon.

Kittyhugs and purrs from MaoMao!

Purrrrrrrrrrrrrs and purrrayers to Dorfie and Reno!!! Lots of positive thoughts and good healing vibes!! Let us know how it goes!!
Your FL furiends,
and Mom

Huge purrs, big prayers and mountains of love to your boys. I hope everything has a good outcome.
Maw, Mommy has such respect for you and Paw, she knows those boys are getting the best possible care.
Smooches.

We are purring and praying for Reno and Dorf. We hope both of them get better soon. Sending hugs your way.

Furry big purrs and good thoughts coming from me. Hope they are both better soon.

oh no! we're turning on our purrers right now and we'll be purring non-stop till the 2 of you are better! lots of love from us - get well!!!

we are purrrin' an' purrrayin' right now for reno & dorf!! we's furry sad that they is ailin' an' hopes that the v-e-t stays on toppa their problems!

headbonks an' steady purrs from
nels, ed, nitro, an' xingxing

Sending our best healing purrrssss for Reno & Dorf, and a big {{hugg}} for Maw & Paw, for being such great beans.

Just checking back for any news. Still purring and praying!

Willow and I are certainly sending over our very most strong rumbly purrs for Reno and Dorfie. We hope you are both better real soon.

We are sending as many hugs and healing purrs as we can. Hope that Reno and Dorf will be much better soon.

Smeagol and Strider, Mystery (Sunnin' at the Bridge) and Gizmo too! said...

We're purrin' and purrayin' for Reno and Dorf to feel better soon.

Astrid and the kitties Kashim, Othello and Salome said...

We are purraying roe Renao and Dorf to get well soon. Our toughts are wif you!
Purrrs, Kashim & Othello

Oah Dearest Reno and Dorf,
Hope you are doing better~!!!

Oh, dear, poor Reno and Dorf. I really hope that Reno's bladder infection can be cleared up soon. I also really hope that Dorf's eyes are all right. I'll be praying for both of them until they are better again.

Reno and Dorf, please get better soon. I am purring my very hardest!