We're slowly working our way around to efurrybody's bloggies who left us kind purrs and purrayers and headbutts last week to purrsonally fank you frum da bottom of owr liddle hearts.

Update on Reno: He was very vocal after coming home from the V-E-T on Saturday. Poor guy would even wake up meowing. He was also hoarse, leading us to believe he did a lot of howling while at the V-E-T. He has also been kinda clingy with Maw, following her efurrywhere and even lying on her lap. But he also puts the HARD bitey on her fingers, which is another reason why he was never adopted.

As for the C/D, although the V-E-T said he needed to be on it the rest of his life, he doesn't like the canned stuff, and Maw doesn't want to switch the whole gang over to C/D, primarily because of Obi's penile urethrostomy. The surgeon who performed Obi's operation told Maw at the time that Obi should not be on any of the URI diets because they could end up causing the opposite crystals, although he never exhibited any crystals when he was blocked. He was blocked with sediment and had a severe bladder infection. He has had several bladder infections since, and he has to go on steroids to bring the inflammation down. The V-E-T believes these bladder infections are due to Obi's "sensitive" nature and stress. And Obi & Reno are siblings. So Maw might mix dry C/D with the rest of our dry foods (except for Gatsbi's R/D that stays on the floor) so that Reno gets some C/D, but she doesn't want to switch our entire diet to C/D. And Reno drinks plenty of water from the fountains and the bathroom sinks. He did NOT like drinking water from that tiny little ceramic bowl in his cage at the V-E-T. So Maw isn't going to hold Keno & Bunco in the same months from now on, and isn't going to bring a toddler over to see us. Since Obi & Reno are both so susceptible to stress and bladder infections. Oy!

As for Dorfie, the book about blind dogs hasn't arrived yet. But knowing that Dorfie is going blind helps Maw to understand his behaviors better now. Such as; he walks with his nose very close to the ground much of the time. He also startles very easily when he is closely inspecting something and another poodin comes up and sniffs him. He likes to walk right into the pantry when Maw pulls out the food containers and closely inspect it. He does the same with the cabinets.

Several of you suggested ramps and steps. We already have steps leading up to the bed because it is one of those super tall Shaker beds. Dorfie uses those steps. He also uses the step next to the garden tub, then climbs on the tub, then jumps onto the bathroom counter to get to the food and water up there.

Last night was the first "cool" night of the season. It actually dropped into the 50s in the 'burbs. There were so many poodins huddled up against Maw that she couldn't move. We had her pinned down. At one time when she got too hot from too many poodins, she had to wake up, sit on the pillow and pull her legs out from under the covers and the poodins.

Finally, several of you asked about Maw spinning spider webs. Well, it is Halloween time, but she isn't doing that. She is working on her web master certification at the local community college through their continuing ed program. She's not thinking of going out and getting a great job with it because these classes aren't that detailed and she isn't a 25 year old who grew up designing web pages and games and stuff. What she wants to do with it is to design her own web site for cat items and other stuff. Currently she is taking Intro to Javascript which she loves because the instructor is great and makes it easy to understand. Here is the local community college's web master certification program: 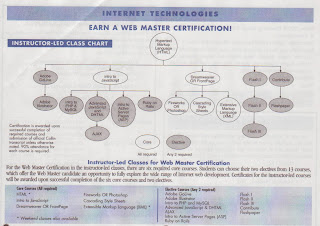 Mom went over to da naybors house fur coffee on Sunday. She watched the cats sleep mostly...but when da ladee got out treats and all da kitties (and da woofie) came running she couldn't even tell which one was blind. She puts their treats down in the same spot fur each one and dey all go to "their" spot and eat treats. Da lady told her that since the cat went blind later in life and already knew the layout of the house he didn't have to many problems with getting around. The only odd thing was that the cat he used to fight with and hated when he could see became the one that protects and guides him after he lost his site! She said she didn't know what happened to change their attitudes other than the blindness. She also told mom that they've made a few adjustments for him, like making noise when they approach him so he doesn't get spooked and NEVER EVER MOVING FURNITURE or when adding something new walking him thru it's position a few times. She said he still bumped into somethings for a few days until he learned they were there, but that the other cat usually does a good job of stearing him around obsticals like other cats and bean legs and stuff. This is long, but mom wanted to give you some of this information...We all hope Dorf adjusts well and even more important, that you do too.

Back a few years ago one of my cats (one of three at the time) had to go on CD. She didn't like it at first either so I would mix a little in with he regular canned food. Each time I mixed more and more until finally she was eating all CD. She would eat her CD out of one bowl while the other two ate their regular food.

Even though I am supposed to only eat X/D, I still sneak some of Pixie's food. And my urine is still OK.

I am very impressed with your maw going for her web master certification. That sounds very hard! Even harder than spinning a spider web.

Way to go Maw!
Our mom laughed when she read about all you 40 paws huddling around your Maw for warmth. She hardly dares move when one of us is sleeping against her, cause she doesn't want to disturb us.

wow, that's a lot of stuff going on. your mom is shur nice to re-arrange her skjdule and not bring over sticky little people anymore. Norton usded to walk like that wif his nose close to the ground when he was going blind. His hips also herted and he kind of lurched around too, so he would bump his nose on the floor. one time he dragged his nose on the carpet by mistake and when he picked his face up, his nose turned bright red and started dripping blood. Mommy freakd out big time and picked him up and cuddled him and sang to him, so he did it every day for a week.

Hoo Boy Maw...I am impressed that you are doing web thingies - my Mommy would like to but she says something about not enough hours in a day.
Dorfie, Dorfie, Dorfie - We have been thinking about him a lot and we've been praying that he adjusts as good as is felinely possible!
Please give him some smooches from me and Mommy - but warn him first!

It's hard when you have so many pets trying to change their food. I hope the changes your Maw is making regarding the food, and not bringing over the little visitor and other visitors, takes care of the 2 cats' UT related problems.

Poor Dorfie. I hope his adjustment to his failing eye sight begins to get easier for him.

Big hugs to all the ailing cats in your household. Good luck to your Maw, in learning web development.

Our Lady does that thing where she sits on the pillow and eases her legs out too. Plus, if it looks like one of us is going to flop over into an uncomfortable spot, she carefully replaces the leg lump with a blanket lump. We've got 'em trained well, haven't we?

Good luck keeping everyone on their special diets. That must be hard!

oh, dear forties!! we has not forgot reno, obi an' dorf (an' alla rest of you, beans an' furries) in our purrrayers even yet. that's some kinda world record for rememberin' in this house! an' we sprinkles in copious purrs for you all, too. we thinks of the stories our mom has told us of The First Cat, mouse mcnasty, who only lived 2 years acause his urinary prollems was so bad, acause there wasn't no special foods for him then. we gives special thanks for vets who know so much more about us these days! an' our mom has known blind kitties an' woofies personally, an' for the most part, as long as it's gradual, they get along just fine.

youse guys is really lucky--you gets to sleep wif maw an' paw. we can't, acausa mom's lergies. but how big is the bed???? does you has a wall-to-wall mattress?

(an' we will add maw's poor ofurrtaxed brain to our list of things to purr for; we know that learning basic html nearly drove our mom to the rest home!)

best fishes to you all--the meowers

ps - we are giving you an award tomorrow

we are always praying for all of you, all forty of your paws and all ten of your hearts and all hundred of your teeths.

compyooter stuff is for smart people. You mom must be a genius!

Hi, I'm MoMo and new to the cat blogosphere. Forty Paws - that's absolutely pawsome. Since I have been on my own for years and there are only 2 cats in the whole block, 10 cats in one place is way beyond my imagination. I guess it could be fun.......
Purrs,
MoMo

I'm glad to hear it is getting a little cooler for you guys. I hope your Maw can figure out how to get the right food to everyone.

Good luck to your Maw with her web courses! My mom worked for many years as a web designer and web projects manager, but she much prefers working with people, not computers, which is why she is working on her Masters in Physiotherapy.

I am continuing to keep all of you in my prayers.

I will continue praying and purring for you~!!!! Hope the food gonna ok!!!!