This week's Photo Hunter's Theme is "flexible". Here is Obi wearing a flexible e-collar after his penile urethrostomy several years ago. This collar flexes outward like a rigid e-collar, or flattens against the body as Obi was modeling for us. Because of it's length, he was unable to groom his privates, which would have caused scar tissue buildup after the surgery and that could have caused new urinary tract blockages. After three weeks of wearing the collar, and lots of medicines, he was all healed. He is still prone to bladder infections though, particularly when he is over-stressed. The V-E-T says he is a "sensitive kitty". 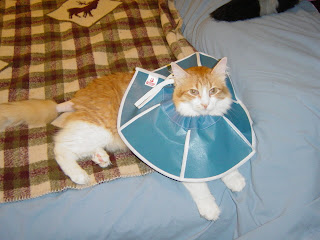 That IS flexible. Too bad poor Obi has to wear it :(
The surgery sounds.......ouch(I'm crossing my legs here)
Hope it fixed the problem.

Obi, that is quite the fashion statement you made with your big flexible collar. I'll bet you were very happy when you got to take it off, too! It looks like part of your floofy tail got shaved, too.

Poor Obi. The collar doesn't look very comfortable, but at least it accomplished it's important job.

Donny and Marie and Casey said...

Wow, I had NO idea that such flexible collars existed. It makes you look rather Elizabethan.

I couldn't imagine having one of our cats wear that for 3 weeks. I know they'd fight it. I'm glad for Obi this is well in the past for him :-)

Oh what a creative flexible you have!

You know, as far as doctor collars go, that one ain't too bad, Obi. At least it's a nice color that matches your gingerness. I'm sorry you had to have surgery, though. Ouch.
Your buddy, Jimmy Joe

Oy. Poor Obi, how humilllliating.
He does look wonderful in Bloooo

Oh, man, Obi, I think I would have to inflict some serious biteys before anyhuman could put one of those collars between me and what privates I have left!

Well I am glad I didn't have to have an operation like that (fortunately I am a girl) or wear one of those collars - I am so glad you are better. FAZ

Thank you for sending us purrs about Chloe's passing to the rainbow bridge. It is nice to have such support in sad times.

Even though you look very cute I know you were happy to have that off.