Some of you might think that Dorf is an old fart because he has had all of his teeth extracted, and is losing his eyesight. Actually, he just turned 7 in August. We figure he just got some bad genes. His brother, G.T., has severe allergies. So bad that he tested positive for 28 out of 34 allergens. That's why he gets a monthly shot.

On to other items of inchrest. Now, Bow overheard Paw telling Maw that his boss decided to start another class on December 1, so Paw doesn't get 6 weekends off after all before the next class starts. He only gets 2 weekends. Well, this totally freaked Bow out because Paw had PROMISED to build the new cat enclosure during his 6 weekends off. Remember how we ripped down the old cat enclosure when we had the new windows installed? Well, Bow had found a website in his CatFancy magazine, and decided to take matters into his own paws.

So, he swiped Maw's plastic money

when she was outside putting down more of that instant grass that looks like a big checkerboard and ordered this: 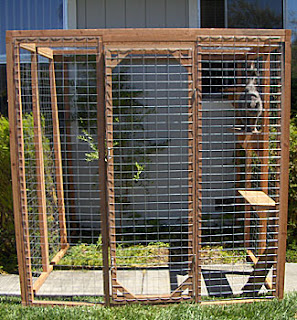 Except that he ordered a ginormous enclosure with lots of extra ledges so that he doesn't have to share his sunning ledge with any other poodin.

Now, in even more news, there are certain sites that we peruse daily, and we found this over at I CAN HAS CHEEZBURGER, and we thought this would inchrest our wonderful furriend, Daisy the Curly Cat. 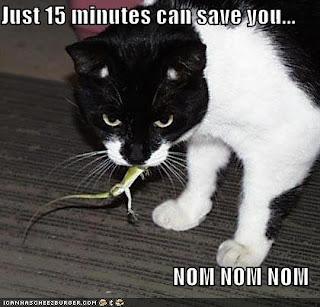 And last, but not least, a site that we just recently added to our daily "must see" lists, is Disapproving Rabbits. There was an article about this site on MSNBC.COM recently about its popularity, and about a book that had just been released based on the site. Well, apparently the book is going gangbusters on the book sales racks. Concatulations to Disapproving Rabbits!!!

Email ThisBlogThis!Share to TwitterShare to FacebookShare to Pinterest
Labels: Stuff, Taking matters into my own paws, The udder side of da noos

Cats have all the luck.

High Pawzie Bow...you go buddy! That's the way to do it. We thought those two websites were furry kool..

Oh, we loves the disapproving rabbits!!
I also loves playing on the keyboard with my mamma's credit card numbers!!
Good job finding a big outside enclosure, it looks very nice.

(sorry to hear that paw does not get 6 weekends off)

I am so glad you are getting your outside enclosure! I wish I could get one.

Way to go Bow!!! It also saves your Pa some time and now he can relax on those precious weekends off.
Be sure to take a picture of it when it comes!!

Those are some items of inchrest. Especially the cat eating the LIZARD! It must have been a very bad lizard, too. I think the green lizards might taste better than the brown lizards.

I think that enclosure looks wonderful! And it looks very safe, too. I am glad you got lots of extra ledges, because that seems like the best part!

we LOVE Disapproving Rabbits! We also finded them a couple of weeks ago.

What a great job Bow did picking out that enclosure. I think it looks fun. I'm sorry your Paw will be working so much on weekends, that is stinky.

Thanks for the tip on Disapproving Rabbits. That is so so funny.

I tink dis looks like it will be a nice ob-servatin' place fur you. Many catz do not get such a nice place to look out from. It looks especially nice fur bird (and rabbit) watchin'.

That looks like a very nice enclosure, you guys are sure to have so much fun in it.

Sometimes, when the Mum and Dad are slow you just have to take things into your own hands - good job!

Excellent job! We're gonna follow your example and order ourselves a giant indoor kitty condo. We really need one, 'specially now that we're up to 20 paws.

Now off to check out the bunnies - we love bunnies!

Yay Bow, we love to "borrow" mom's plastic money and have shopping sprees. Oh and mom is making a 24 pound turkey today and is thinking about giving it a bikini cuz our bean sisfurs and der husbands would find dat furry amuzing. Stop by fur turkey any time...we gots about 18 pounds of it left!

Wow, that gave me ideas - where is MomBean's plastic money???

Bow, that was very thoughtful of you to save your Dad from all of that work. I'll bet you enjoy that enlosure a lot when it arrives! This was a very inchresting post for sure!
Hi Dorfie!

That was a great post.
I used to read Cinnamon's blog everyday, when she was just a disapproving non-celebrity rabbit.
How cool is it that she got her own book?

That enclosure is sweet! We want one of those. It's good that now we know that all we have to do is swipe Momma's plastic money. hee hee

Oh, that enclosure is so cool!