Eric and Flynn said they nominated Dorf because "he has had so many health problems in his life, but he has the sweetest look on his face, and is a brave poodin." 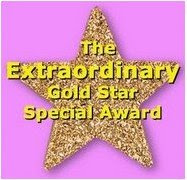 The Extraordinary Gold Star Award was created by - Storm, The Furry Fighter - and is for Bloggers who have achieved or done something special. The award celebrates beyond what is ordinary or usual.
1) Post the explanation and rules of the award and link back to the blogger who presented you with the award and repeat the reason why you received it.
2) Pass the Award on to two other Bloggers who you think deserve it and explain why.

Dorf would like to pass this award on to:

1) Diva Kitty Mom for organizing the entire Secret Paws project this year. It was huge, with over 100 kitties participating, some woofies, buns, birds, a tarantula, and a horse! From looking at the Secret Paws blog, it appears that DKM sent out around 225 emails to organize this huge effort!!! And, from reading all the blogs of very excited poodins receiving their Secret Paws prezzies, we have to say that is was a rousing success! Thanks DKM!!!!

2) Miles of The Meezer Tails because he is my almost toofless brudder frum anudder mudder. He has the same disease that I had: Feline Odontoclastic Resorptive Lesions and he keeps having to get more teeth extracted. One day he'll be just like me, toofless. But he remains SO FREAKING FUNNY in spite of the enormous pain that FORLs cause. He cracks us up with every post and that is impawtant.

Thanks Eric and Flynn for thinking of me. Youse guys is the bestest long distance Yookay brudders a guy could ask for.

Congratulations to this wonderful award!
We also wish you very happy holidays and a wonderful new year!
Karl and the rest from The Cat Realm

Congratulations on your award Dorf! I am glad it was you. You've gotten two great cats for this award too!

oh Dorfie! Fank you so much! I is so 'acited and honored!! - Miles

Yer welcome Dorf. We're glad to be your bruvvers furrom over the seas. Those are two furry good nommynayshuns you made. Miles cracks us up too.
We haf told our mum she has to git her act in gear and sign us up furr the next Seekrit Paws. She wuz going to do it this time, but nefurr got round to it. Hyoomans!!!

Dorfie, you are wonderful!!
We are soooo happy you received this awardie!!

We hope all of you had a very happy snazzy Christmas!

Many congratulations on your Gold Star Award, Dorf. I am so happy that you got it, because you really deserve it. You picked great recipients, too.

Oh, and on your question, yes, I was holding the camera. It took me several tries to get an even decent-looking photo.

Sweet Dorfie, you truly deserve this!

Congratulations on your award, Dorf :-D

I was very ill during my first year, and was the runt, had eye problems and have never weighed more than 7.1 pounds. and now that I am five, I am sick again, lost a pound, and have to have all my teeth pulled on Jan. 8. I am very nervous. I have the herpes zoster virus --a bad rash on my throat and mouth, and I have to eat slowly since it hurts bad. You are an inspiration. I will think of you when I go to the docs .
paws up to you dude!