Jenny is still mostly feral although she has lived with us for 13 years now. She wasn't trapped until she was between 3-4 months of age. She is extremely skittish still and can't be picked up. We have never pilled her. She has only been to the vet a handful of times. (Thank goodness she is a very healthy cat.)

One time years ago before Davy was killed, Maw and Paw went to England to see Paw's family. Jenny had gone out the night before and didn't want to come in the next morning. Maw and Paw had to leave for the airport, so Maw told the petsitter that Jenny was out and that she would probably come in if the petsitter opened the patio door and then hid in the hallway until Jenny was well inside. Well, Jenny didn't come in for that whole week. The petsitter tried everything to get Jenny to come in, but she refused. So Jenny stayed outside and ate her meals outside and waited until Maw & Paw came home before she came inside. 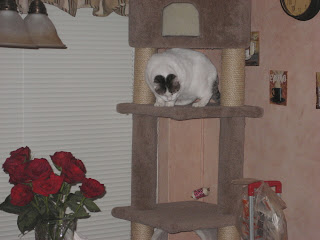 At least she din't run off or get hurt! How scary. Bet the pet sitter (if she was good) was worried.

She may be skittish, but I know she loves you lots and is very grateful for such a loving home!

We is sorry yu is still so scarit dat yu run at da drop of a pin...our own Gracie is furry skittish too. Momma has werked wif her enuff now dat she will come to Momma when she calls and after Momma lets her sniff her hand she will come up to Momma and headbutt her. But she will dash off in a quik lightenin speed datta knok yur socks off.

Jenny you look so cuddly, it must be hard for Maw not to cuddle you!

Awww Jenny looks so cute.I'm sure she was happy when Maw and Paw came back.

Yup, sounds like a kitty who made her mind up to wait for Maw and Paw. We can be quite hard headed when we wish to be!

Jenny is very stubborn! I'm glad she has such a good family to look after her.

Merry Christmas and Happy New Year! I hope Sandy Paws is good to you all. Purrs!

Jenny, you are a ladycat who knows her own mind!

Wow! You certainly know what you want.

Sounds like something traumatic might have happened before Jenny was trapped ... she's really lucky to have a wonderful home with you!

Wow, I think its probably her personality rather then her former feral state. I've had several ferals over the years that I've trapped and tamed at about the same age. Some responded after a few months and became real love bugs, and other were just in it for the food.

I am glad she stuck around. What stress for you humans to know she was outside! Of course, maybe she knew what was happening and didn't want to be locked in with a stranger?

We're glad Jenny hung around and waited furr Maw and Paw to come back. Mum used to have three black bruvvers called Mr. Pig,Tozy and Desmond.Mr. Pig wuz furrendly, but Tozy and Desmond always ran away furrom efurrybody. They liked to lie in furront of the fire, but wouldn't let anyone touch them, but if yoo could git hold of them, they wuz ok then and would purr. When they got old, they suddenly got furrendly and liked sitting on laps.

Oah Jenny,
you are really touching my heart, too!!

Oh Jenny, you would have driven my mom crazy with that behavior. I'm glad you didn't run away. Here's hoping you stay healthy for a very very long time!

Hi, Friends, What a funny story. We cats just have a mind of our own.

Drop by and pick yourself up a basket and something for your mom.