First off, we are SO HAPPY that Mao has gone home to his fambly. And, we are also happy that Annie has been spotted twice by her beans! This is SUCH GOOD NOOS!

Ok, last week, we wanted to show you the weird chair diapers that Maw put on the dining ruum chairs. But NO, she had to show you the Al Qaeda kitty. So, here are the chair diapers. See, Maw had the dining ruum chairs re-upholstered back in November because the old seats had gotten a bit kitty-clawed if you know what we mean. So she picked out this loverly fabric that she thought went with the drapes and the wall color in the dining ruum and kitchen, etc. And she looked up a re-upholstererererer dude on Angie's List. So this dude did a great job and put the welts on and efurrryting was fantastic. So Maw brought the seats home and started screwing them back on the chairs. Gatsbi immediately jumped on the first one and proceeded to claw the holy crap out of it. Maw is like, "ACK!" Obviously, the fabric she so carefully chose was not as kitty proof as the original fabric!!! So, Maw took the seat off and thought about it for a long time. She considered just throwing towels over the chairs, but she already does that with the kitchen chairs, and we pull those off all the time. So, she went out and bought this butt-ugly corduroy fabric, and wrapped it around the chair cushions and staple gunned it in place. So when company comes over, she is gonna take the diapers off temporarily. Good thing for her that company doesn't come over very often.... 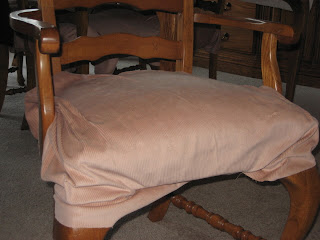 In udder noos, yestday was clippy claws day here at da Forty Paws. Datz also da day dat Bow & Gatsbi git wayyed on da baby scales. Well, as you know, Gatsbi has bin on a D-I-E-T for about a yeer. When she was on the prescription R/D, Maw & Paw called it the bulimia D-I-E-T because when she would eat too much, she would yak it back out. Well, it was an effective D-I-E-T because she lost 3 lbs. But Maw & Paw got tired of cleaning up yak, because all of us yakked R/D when we ate too much of it. It sorta expands in the belly with water intake. So, Maw switched to W/D. And now Gatsbi isn't yakking it all the time, but she has gained back 1 lb. So, Maw has to talk to da V-E-T today when she takes Bow in for his ol' geezur check-up. Bow will be 18 in March and he needs to have some blood taken and see how he's doing.

LOL I gotta admit they do kind of look like droopy drawers the chair is wearing. But those of us who are allowed to live in a house with a cat or cats, surely do understand. Thank goodness Fred the Cat is not interested in getting on furniture. When we first got him he liked to do his nails on the back of our couch. I put a bell back there and every time he messed with the couch, the motion would make the bell ring. He didn't like the sound and quickly stopped doing damage.

Your Maw is great! Giving in to the kitties every time, & always thinking of their needs! We love ya Maw!!!
Shaggy always threw up his W/D diet too. And then it was on the recall list, and mom doesn't trust it anymore.

Oops. He was on M/D not W/D. Too many letters to deal with figuring them all out!

Those chair diapers are funny! Mao coming home and Annie being spotted was such fantastic news. Oh, and Brit finally did get adopted! Two very nice college girls fell in love with her.

That looks like something my human would do with chairs!

personally i don't mind chairs that have been kitty clawed one bit!!! y'all are the cat's pajamas!

I love to claw things, and I keep forgetting I am supposed to claw my scratching posts, the sofa is my favorite thing to claw. I started working on it shortly after it was delivered.

Those chair diapers are pretty funny. We only get the dining room chairs, and by we I mean Huggy Bear and Maggie. Josie and I behave. But Mom has talked about recovering the chairs. She thought she'd found a slip cover at Ikea that would work but it wasn't right. I guess you're right about company not coming over too often, though...
--Jasper

Sorry to hear you got clippy claws. We were supposed to last night, but Daddy fell asleep and forgot. hee hee

we doesn't haf cushions on our dining room chairs 'cause we haf "farmhouse" furnichur. AND Grampa Norton would haf just peed on them anyway.
Of course gatsbi hadded to redo all of that hard werk that went into destrying the ferst cushions!

We don't talk about diets at our house - unless I have lost weight -then I will discuss it!

A chair diaper looks like a great idea! Happy Clippy Claws Day, well sort of... especially for the treats after.

Hey, who are you calling old geeeezer
:-D Well, We must not be old geezers yet, we will be 17 in April

Purrrs for a happy day

Haha we never saw chairs wiv diapers befurr. It's a good ideer though cuz now yoo can sharpen your claws as much as you want. We never get our claws clipped cuz they keep short furrom climbing trees and fings.

We got sharp clawsies too but lucky for our bean we calw mostly on our boxes and kitty house! So glad both Mao and Annie returned :)

Love and purrs for all the forty pawsies from the SnowForest family :)

Most of the time we only claw da stuff we is a'ppose to claw, efurry once in awhile we go ahead and claw da carpet or da chair juss to keep Momma on her toesies.

Please pray that my mama and daddy don't have to give us away when they move to Thailand this year! We want to stay with them…

If you would like to see our podcast it is at:

Hahaha! That's funny. Those do look like diapers on the chairs!

Funny looking chairs - don't know why your mom was so worried about recovering them - the main thing is that they're comfy (for the kitties)...We're sorry to hear about the clippy claws day - Mum only clips ours occasionally but it's never any fun.

ANNNNNNND this is why Mommy has all wooden dining room chairs with pads put away that she only takes out for company! The diaper chairs are cute tho!
Bow is gonna' be 18!?! He deserves a catnip cake or somethin'!

Our Lady's cousin's wife has chair diapers too, but she won't even take 'em off fur people. They've got 2 cats an 4 people an lotsa guests an NOBUDDY has effur sat on them chairs. Maybe she shouldn't have bought all white furnychure.
Hey - yur mom could put sum stick on velcro on the bottom of the chair seats an then put velcro tabs on the chair diapers an then put 'em on an off furry easy.