Today we are featuring our good furriend Grey, who is still in intensive care.

Grey is a real ManCat! He used to be the shop cat at a mechanic's shop where they store a Real Race Car!!! He lived there for 13 years until he developed hyperthyroidism and needed twice daily meds, so then he came to live with the shop owner and his wife. 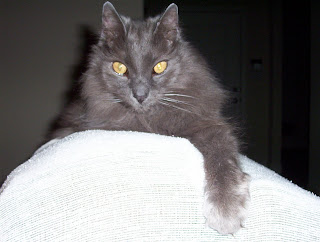 Then on Wednesday last week he threw a blood clot and fell over and couldn't get back up. His V-E-T sent him to North Texas Veterinary Referral Center and he has been there ever since. They discovered that he has cardiomyopathy and also a compressed spine. The x-ray showed down toward his tail that a disc is now missing & another almost missing & the vertebrae have been rubbing on each other which is causing some neurological problems in controlling his rectum & bladder muscle.

He is eating and drinking well, and pooping with enema help. The V-E-T removed his catheter yesterday and also said there was some feeling returning to his hind legs. Today he is probably going to see a neurologist.

get better reelly fast ok buddie..us mancats has got to stick together...

Sending lots of purrs for Grey.

Ouchies, Grey. Hurry up and get better bud. We're sending lots and lots of purrs for you.
~~ your bud Pepi

Pee Ess. You 40 paws cats are cool to show us about Grey.

We are purring and praying for Grey!

We only just read about your furrend Grey. We hope the meddykayshuns help to get him better. We're sending him loads of purrrs.

What a good looking sweet cat Grey is!! And brave too!
Hope he is feeling better real soon!

Feel better soonest, Grey. We're all purrrring for you.

Grey, you are so handsome! We're purring for you to get better!
Smooches!

I am purring very hard for Grey!

I will definately purr for Grey and light a candle for him too. It worked for Churchill!

Oh, the poor little guy! I hope he gets lots of TLC and plenty of chin scritches.
I'll definiteyly keep him in my thoughts.

You are one handsome kitty! Meowm and I are purraying and purraying for you to get better!

Your cousins Rusty and Ms Kitty are sending you lots of purrs.

Oh we hopes he feels better soon. We are sending lots and lots of purrs his way!!

That's very sad. I hope something can be done for him, so he will feel better and have his health issues managed. Hugs for Grey and his family.

Oh... poor poor Grey. I want him to get better and come home. He is a very sweet mancat, and very handsome too!

I will purr strongly for Grey.

Oh man, poor Grey. I hope his back and heart are working better soon so he can poop on his own. That is very important, as you all know.
Your buddy, Jimmy Joe

We is still purring and purraying fur Grey. He sure is a handsome mancat.

I'm pullin' for ya buddy! You are such a handsome mancat!

Grey dude, I is sending you healing purrs from across the ocean. I liked hearing the great story about you. You sound like an awesome guy.

We're purring really hard for Grey to keep getting better so that he can get out of the hospital and go back to his home. He was a responsible working cat managing a shop and deserves to continue his retirement in style. Hang in there big cat!

I send many good wishes to Grey; Get Well soon ,

Oh, poor Grey! That's such a shame. We finally had a chance to read back and find out what happened to him.