This is a little blurry, but it shows 4 mancats watching Catnip Video! Reno, G.T., Obi, and Smokey. Annie is playing "Where's Annie?" under the newspaper. 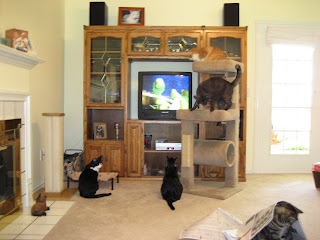 In other news, G.T. is now undergoing his new allergy shot schedule with a Benadryl 1/2 hour prior to his shot. He is NOT impressed. The Benadryl also seems to make him hyper instead of sleepy.

We also got clippy claws yesterday and we were NOT happy about that either.

Bow is now on his Budesonide instead of Prednisolone. Maw had to hunt around for a pharmacy that charged a reasonable rate for formulating these capsules into 1 mg. The first formulary charged $2.15/capsule. So Maw found one that charges $1.33/capsule. Bow is unfortunately losing a lot of weight since he's off his treats and pred. He'll go back into the V-E-T for another blood glucose test in a couple of weeks to see if he's still leaning toward being diabetic.

We'll try to get around to efurrybody's blogs in the next few days. We know we are behind.

sending all y'all big hugs honey!

You guys have the perfect set up with your cat trees right in front of the television!

It's okay, it sounds like you have your paws full over there. Hope e-furry-one is feeling better soon!

I think I would pick a spot on the cat tree to watch the TV!

A catnip video??!! I gotta get me one of those!

Meowm and I will purray for GT and Bow.

What a cute picture of you guys watching t.v.

I am so glad there are beans like your Mum and Dad that can look after kitty cats that have special needs. God has a special place in heaven for people like them.

Annie is just plain adorable under the paper!!
I hope that GT & Bow are feeling good as new soon!
I don't know anything about formulating medicine, but wal-mart has my mamma's meds for $4 vs. CVS charges $90.

I'm so sorry you're not feeling well. I hope the allergy shots make you feel better and you can get back to being normal soon.

I don't need the picture box for kittie TV, I just look out the windows in my house!

Hope everyone gets to feeling fine.

Meeko likes to "help" Momma read the paper. Ushually there's not much left to read when she gets done wif it. BTW...keep an eye owt fur Momma on Friday. She's headin' down that way fur the weekend.
:;purrs::
~Meeko & Kiara

Wow, dat's a lot of mancats. But we don't know why you mentioned Annie, we don't see Annie (heehee).

It looks like you are all enjoying that video. We love how Annie is playing with the paper. We hope GT's and Bows new meds work out well.

You have a great spot to watch TV there.

So sorry to hear Bow is losing weight now. I hope his next blood gluclose comes back okay.

Catnip video - wow! Yep, the cat tree would be my place to sit and watch!