And now back to regular programming:

Yesterday was clippy claws day at la casa de Forty Paws. We've told you about how Reno has to be done first because otherwise he takes off running for the next month whenever Maw or Paw get close to him. Well, he could sense that something was up yesterday, and he wouldn't go to sleep at all. He would leap up and take off running whenever Maw or Paw would get within 10 feet of him. So they decided to start trimming the rest of us while Reno was outside in the cat enclosure. Then he came in while they were trimming Annie's toes. And she howls and carries on like she is being killed. So Reno didn't get his claws done and probably won't for the next month. 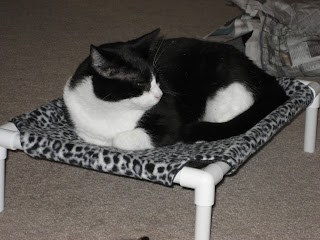 And in even further other noos, we know that most of you quit buying IAMs last year during the tainted food poisonings. Well, Maw didn't because about half of us eat IAMs canned foods, and all of us eat the dry. And the recall was for the pouches of moist food, not the canned. Anyway, IAMs decided to reformulate their wet food and also to redesign their labels and their cans. The wet food used to be called "entree". Now it is called "pate". We don't like it. It sits uneaten all day until Maw takes it outside and gives it to Orinch 1, 2, and Bob(bie). Also, the redesigned can has flip tops that are impossible to open without a tool of some sort, and then they break off. And the labels where the flavor is written are pastel background with either white or pastel colored teeny tiny font. Very difficult to read. We assume the redesign is an attempt to bring back customers they lost during the poisonings. But now they have lost a customer who stuck by them. Later IAMs.

I hardly ever need to get my claws clipped, but Kavan does every month!

Mom uses Firefox, and still had problems all weekend.

wow that was a lot of noos! poor reno, i hate my nails clipped too...

was it like a manicure, Miss Bee painted my toes red once while I was asleep.

We're lucky cuz we don't have clippy claws, cuz we keep our claws short when we climb trees.
The time diffrunts confoozes us. We don't change furr three weeks so we fink you are 5 hours behind us now instead of 6 but we're not sure.
Mum once bought us Iams dry food but we wouldn't eat it. No way!!

Did they take the wheat out when the made the new formula? It also sounds like the marketing department took leave of their senses.
Reno sure knew something was up didn't he. We all know us cats are psychic and he was reading your minds for sure!!!

I hate the new IAMS cans too!! Katie will eat anything. Greta Garbo passed on the stinky goodness all together. Not sure why.

Jitterbug is getting injectable antibiotics now, which he will stay at the clinic for.

I hope you find other good food that you all like.

awesome job avoiding the clippers Reno! I get my claws trimmed bi-weekly cause I'm a scratcher. When the beans get busy tho, I wear soft paws but those don't last long on me...
we can't imagine doing all 40 paws! wow!
great jobbie on the hamm-ick. i wish we could have bid but don't have enough green papers right now.

We've nefur had our claws clippee by Momma. I don't fink she better try it on us now. Momma is trying some wholistic foods on us...we actually liked them!

I eat Sheba, but I suspect with 10 cats, you'd quickly end up in the poor house trying to guy it in quantity.

Reno, you are smart!

Mommy has given up on trying to clip our claws . . . hee hee.

Shadow eats Iams and likes it fine because that's all he knows (shhhh..)

Today he found the greatest hidey-hole, and if I hadn't seen him disappear into it, I would NEVER have known where he went - there's a gap or something underneath the joinder of two kitchen counters - down at the bottom under the foot clearance. It doesn't lead to the inside of one of the cabinets. It leads to ... I dunno, somewhere else in the building??? Whew! I'm so glad I saw him. I coaxed him out with Iams tuna, and then blocked the hole. I'll ask the maintenance people to do something about it.

Sunny told me that Reno is very smart ;-)

mommie hates tiny font.
It is not nice to irritate the presbyopic population!

time change is nutty... I agree

Meowm will clip my claws, but I only give her a chance to take a teensy bit off....so she had the
v-e-t do it and she thinks the v-e-t got them to short. That will teach her!

We hope you find a new food to love!

we used to eat the dry IAMS, i'm not sure the UK stuff was in the poison batches though...

So what food *will you start eating? (This subject is always dear to my heart.)

The Mom hates the time change with the exception that us furry kids don't get it and so we sleep in a little. In fact, Titus didn't even wake up this morning and The Mom was afraid he might be deadded. But she just had to wake him up. It sure gave her a askeer.

We rarely get our claws clippied - but Mom goes over to to clippy the Interloper's (she was here over Christmas) claws. Her mom is afraid to do it.

They'd better not mess with the Iams kibble formula - it's the only thing Spooker will eat!