Look at my piggy bank after I bought gas today. 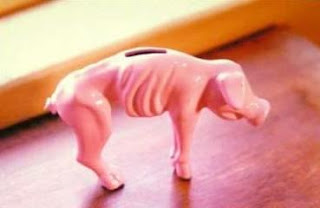 Email ThisBlogThis!Share to TwitterShare to FacebookShare to Pinterest
Labels: Thursday and we need a laugh, What recession?

We hear ya! Mom's been griping about gas for a long time. That is one sad lookin' piggy.

Hahaha ! mine looks the same !!

All the peoples piggies are starting to look like that. Except our guinea piggies, they are nice & plump!

You can have some of my money... of course they could get you for money laundering as it's not really legal yet but it could fatten up your pig.

Poor piggy, needs some foods! I guess he eats from his back.

Thursday Schmursday? Grr told us Thursday was Grrsday...did we let her post a buncha pictures of herself fur nothing?

The humans laughed, I don't get it. Where's the bacon?

My piggy bank look like that too and I not buy gas.

omg, that has to be the sadest piggie banks ever! But soooo funny! we feels the same way, gas prices is draining our temptations fund!!!!!

HAHAHAHAHAHA. Mum thankfully filled her tank on Monday. The price has gone up 12 cents a gallon since!

We fink our piggy bank must be dead and buried then . Fuel here costs around $10 a gallon and it goes up most weeks now.

Poor piggy! Mum says that her piggy bank looks like that every time she has to fill the tank. Petrol just goes up and up in price down here too!