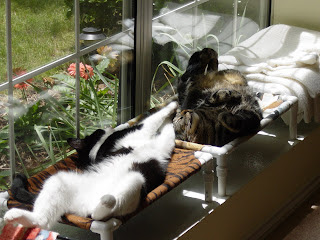 So, Orinch 1 and Orinch 2 have been around here lately. Orinch #2 looks just about exactly like Orinch #1, but a shade darker. Remember when Maw saw Orinch #2 a few months back? Well, Orinch #2 showed up twice in the last week. The reason Maw knows that it is Orinch #2 is because Orinch #1 and Orinch #2 both stand in the backyard and complain to each other. So there you go. Orinch #1 still hangs around here daily and lies on the patio during the warm parts of the day, and takes off running when Maw goes outside. He really is a cutie pie.

Ok, so Maw saw the neurologist on Thursday and he was really quite surprised that Maw had such a large stroke and yet managed to not have the neurological issues that many people have. He was also surprised that she found out she had a stroke because she went back to the doctor and complained about a sinus problem. He's like, "You didn't know that something was wrong?" Maw was like, "Well, I thought it was all because of my sinus problems." So there you go.

So, he's like ok, we're going to get a ton of tests done here. First off, a bunch of various blood tests which Maw completed this AM under a fasting diet. She dropped off 14 tubes of blood at the blood joint. They are going to test Maw for like EVERYTHING. And then tomorrow she is getting a test done at the place where she had her CT Scan and MRI Scan and this will be a MRA Scan of her brain and carotid arteries. Also, if the test comes back from the sonograms as AOK, then Maw has to be sedated and somehow they are going to stick a camera inside her and take pictures of the underneath portion of her heart. Loverly.

And the neurologist also is sending her to a speech therapist. Maw read on the internet that many of the functions created by a stroke are often rectified within 3 months of the stroke. Maw's speech is getting better, but she still has problems with writing. Maw will write something and go back and read it and say, "What did I want to say?" Strokes are very difficult and Maw is extremely lucky that hers did not mess her up too much. Hopefully the doctor can figure out what happened to her.

Ok, so efurrybody got their toes trimmed yesterday except for Sally who stayed out in the cage most of the day. But we'll get her soon.

well i shall purray for maw some more...

Poor Maw! I'm purring hard for her! Being tested is no fun. :(

Well, we see the Saga of the Orinches continues!
Maw, we are purring & purring for you !!!xxxooo
PeeEss: Those are spectacular bellies in the picture!

We are purring and praying hard for your Maw.

Orinch #1 and #2 know a great yard when they see one!
Dear Maw,
I am glad that you are having all of those tests done. It may be a pain in the patootie, but they will give your physician a complete picture of what's going on with your body. Then he or she will know what to do to keep you in tip top condition! I hope you can regain most, or all of your functioning - speech therapists are very smart people!
I'm gonna' send you big truckloads of purrs!
Oh, and Mommy says thanks for the belly photo of Dorf (and Reno!), it made her otherwise crummy day a very good one!
Smooches to you Maw!

we sure hope those doctors can get your Maw all fixed up. tests and fasting and squillions of tubes of blood all sound like yuk. purrrrrrrrrs for it all to be over and Maw to be a hunnerd purrcent purrfect soon.

I'm glad your Maw's neurologist is thorough. Good luck to your Maw with all those tests and with her speech therapy!

That is a sweet picture of Reno and Dorf :-)

Poor Maw, why can't things be simple...like in Star Trek where dey point a thingy at yoo and it makes a weerd noyze and den dey say "yoo gots juju-itis" and den dey point another thing at yoo dat makes a weerd noyze and den yoo is cured. But we gess dat is a long way off so it's good dat dey is using what dey gots to make Maw better. We'z gonna purr hard fur her and her doctors and fur da speach therapist, dat dey can all work together to make her 100% better.

They stoled 14 tubes of blood? That is almost a gallon, I think! But I am very glad that they are being thorough. We all want Maw to be all better.

Sounds like one Orinch has been getting the news out to other orinch boys. Can #3, #4 and even #5 be far behind?

We're sending vibes for patience and strength in dealing with the aftereffects of the stroke as well as dealing with the medical system and its tests. Kinda gets old after awhile, we know...

Oh my! I am sorry to hear your maw had a stroke but how fortunate that she has not had all the normal symptoms. I will send her lots and lots of purrs and purrayers.
I hate getting my "toes" cut.....
--JB

So, can I send Jaz down there for a nice claw trim?
Just kidding!
Hope the blood tests come back okay, and that the therapy helps Maw!

We will keep her in our purrs and prayers!
♥
The purries from Purrchance To Dream
and Not The Mama

Lots of purrs for your mum. That the tests go well and they find the problem. And that the problem is something that can be fixed!

Momma says to tell maw that if the speech therapist wants her to say "thumb" - don't do it!!! When Momma was in kindergarten, a speech therapist came to her school to test everyone for speech problems. He wanted Momma to say "thumb" but she was too shy to talk to him at all. She was the only one in her class that didn't get tested. hee hee

We are sending your maw lots of purrs and purrayers for her tests.

We are purring for you Mom! I hope she does get better.

Maw, I'm so glad it wasn't as bad as it could have been, and that all these tests come out good. 14 tubes of blood - yikes!

Maw, we are purring that the doctors quickly find out exactly how to heal you. It sounds as if even though you had a serious stroke, you are well on your way to recovery. Keep pushing yourself, but by the same token, don't be discouraged if something doesn't happen right away. We are purring for you.

PS - we forgot to say, we have really been using our Ham-micks lately. Check out our Meezer Rule Wednesday for a great photo of the two of us sharing one.

We are sending mega purrs, healing thoughts and prayers to your Maw. We hope with all the tests and gizmos the doctors are using, they can zero in on what she needs help with, and get her feeling better.

We're just catching up after being away and are sorry to hear the news about Maw. We will begin purrin' immediately.