Here is a loverly pichur of Jenny at ChrissyMouse time. Yes, we caught her yestday with a few bites and bruises. She did NOT want to be caught. Luckily, Paw had the day off and helped Maw capture the poor Jenny. Poor ol' Jenny was not happy and was not at all enthusiastic about being left at the V-E-T overnight. And, her teeth reeeeely didn't need to be cleaned, but Maw said she wouldn't be able to capture Jenny again for a few more yeers, so the doc better kleen those toofies while she had the chance. And poor ol' Jenny has lost 3 lbs. of weight since she was at the other V-E-T several years back and that has Maw a bit concerned. So Jenny will get a full bloodcount done to see if anything is abnormal or if she has just lost weight because of her age. And, the V-E-T will also trim poor ol' Jenny's toenails while she is knocked out because those only get trimmed once every three or four yeers also. 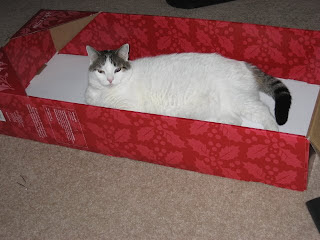 sweet little jenny is just scared... glad you got her and take such good care of her. you rock!

Poor Jenny! I am sending some pawsitive thoughts her way! (And a few extra purrs, too!)

Oh poor Jenny. Purrs to her!

I hope all goes well with Jenny at the V-E-T!

I hope Jenny will be ok at the vet! Purrs to her!
--JB

Jenny, we just know everything will go great for you!

I'm so glad you were able to catch Jenny to get her to the vet. That's such a cute picture of her.

We're glad you got Jenny caught and taken to the V E T, and hope all her tests come back good.
Dad laffed and said Jenny sounds like our mum. She went to the Bean V E T recently cuz she's been having trubble wiv her bad leg. The Bean
V E T said to her that cuz she hardly ever sees her she wuz going to do blood tests and urine tests cuz she probly wouldn't see her again furr a few more years.She didn't haf to get her teefs and nails done though.

Poor Jenny. It sounds like you had a rough day. Even though VET visits aren't fun, they can help us feel better.

We hate the vet too! Hope Jenny is OK and comes back with a clean bill of health (and clean teeth too). Thanks for dropping by yesterday. Meow from Malaysia!

That's a pretty picture of you, Jenny.