Update: Obi is home again. He finally went pee pee at the V-E-T, and yes he has blood and sediment, but no crystals in his urine. He was given sub-q fluids and an antibiotic and a steroid shot to help him along, and now he is on Buspar for anxiety. (He gets over-stressed around here what with Dorf and G.T. bugging him, and him being a highly sensitive orange cat he is a bit emotional at times.) So, he will be on Buspar during his FLUTD flare-ups, which can be exaggerated by a Herpes flare-up which he is currently having one of those right now as well. So there you go.

Previous post: Our beloved Obi is at the V-E-T. You see, yesterday morning he got up on the bed and pee-pee'd right there on the bed. Well, Paw was all like, "You need to take him to the V-E-T!" And Maw has figured something was bugging Obi anyway since he hasn't been hanging out much with Maw and sitting on her as frequently as normal. So, off Obi went to the V-E-T yesterday afternoon. Well, since it is a huge ride of 5 whole minutes, he went pee pee in the cat carrier, but there was a towel in the carrier. The V-E-T suggested that the next time we have a cat with urinary problems that we leave the towel and just bring the poodin in the crate. Now why didn't we think of that???? So Obi stayed overnight at the V-E-T and STILL HASN'T GONE AGAIN. Duh. Anyway, it is probably another bladder infection. Remember, he is the one that had the perineal urethrostomy done; i.e. leaving him a different "opening" than your typical male cat for previous blockage problems.

So, we are awaiting word on what medicines we need to give the kid once he comes back home. 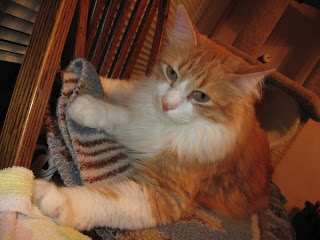 Email ThisBlogThis!Share to TwitterShare to FacebookShare to Pinterest
Labels: Obi at the V-E-T

oh dear Obi. Grampa Norton hadded that surgery when he was 4 and for the next 14 years he nefur hadded anofur bladder 'fekshun or crystals. the only bad thing was that the v-e-t-s that didn't know him keeped calling him a HER.

Obi, feel better buddy!!! we is purring for you!

Getting a sample can be soooo difficult. I can't believe Obi is holding it this long though. We're purring for Obi to get better from the infection quickly!

oh Obi! Many healing purrs and purrs and prayers your way. you take all your medicine and get better soon!

Obi we is purrin and purrin for you.....

Obi, I hope you will go potty soon so you can get the right medicines and come home! Potty problems are very uncomfortable. When I had my bladder stones, BLOODS came out when I went potty.

Oh poor Obi, we're purring furr you to get your right medicine to make you better, and we hope the V E T lets you go home very soon.

We are sendin' good vibes to Obi - git well soon!

Get well soon Obi. Hope the medicine makes everything better.

Obi, glad to hear you a doing a bit better! Get plenty of rest and continue getting well!!!!!

KC and the Giggleman Kitties said...

Sending lots of purrs to mine floofy ginger buddy who cood be mine brudder frum Texus. Bebe and Blackie sez pee problums sux but I woodnt know cuz I don't haff this problum.

Thank Bast Obi is okay! The mom went through all that with TT before she wented to the bridge. Our Dr Dan said that stress does make the FLUTD flair up :( and poor TT was nervous at times.

I am purring for you Obi.
I hope you do not have to take anything that tastes disgusting

About the towel: At least it was there to mop up the pee,otherwise it would be spilling all over the PTU and maybe the car.

Wow. That's a lot of stuff. We hope Obi gets all better soon!

Obi, we will be keeping you in our thoughts and prayers. We hope you start to feel better real soon!

Gosh Obi, peepee prollems is awful...we'z purring dat da new medi-sin works. And dat da other poodins will stop picking on yoo. Mommy tells Zippy to shut up when she hisses us, sometimes it even works.

Oh, Obi, we're sorry to hear about your pee problems. We are purring and purraying that you feel better soon.

I hope Obi feels better soon. He's very lucky to have beans that take such good care of him.

Sweet Obi, I hope the medication makes you feel less stressed and that you feel much better soon.

Purrs to you,
Lux

oh i furgotted sumpin. Wher him get da herpes flarups?

Poor Obi, having a bladder and a herpes flare-up at the same time. I hope that he feels better very soon and you can get all those meds down him without too much fuss.

Hang in there Obi. The v-e-t knows what to do. I can identify with the anxiety, I have to deal with some of that myself, especially during hurricane season.

Obi, hoping you are feeling better by now. Pee problems are no fun.

When Luna was having all her urinary tract problems, the V*T got more than one sample from the bottom of the PTU. They're a little dirty, but apparently still acceptable for what ever they do with used cat pee.

Obi, sending you many purrs for a quick recovery from your floofy ginger and white almost-twin! I too have been having v-e-ts sticking their fingers in rude places lately so I can really sympathize.