Here is a picture of Gatsbi from November of 2008. You can see that she is a wee bit on the plump side. She has been on diets, and she puked up the R/D food. She did ok on the W/D, but didn't lose as much weight as she did on the R/D.

Anyway, she suddenly started losing a lot of weight in the last few months, so off to the V-E-T we went. Maw assumed that she had diabetes, but the V-E-T said that she might have kidney problems, or a hyperactive thyroid. Obviously, the thyroid would be the easiest to treat. But oh no. Her tests revealed that she has diabetes. And of course she loves her dry food, and based on what we read about feline diabetes, she should eat much more canned food with lower levels of carbs. She really only likes honest to goodness canned tuna for humans as her wet food. So, the V-E-T said she needs to eat D/M. Well, some of the cats seem to like the dry D/M. Gatsbi doesn't like the wet D/M. 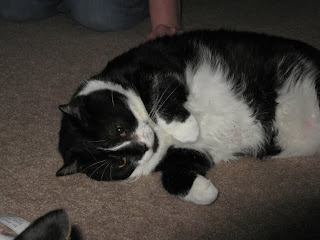 So, we have Gatsbi on the Glipizide, twice daily, and are going to see if this will work with the D/M rather than going with insulin injections. We'll let you know!

Email ThisBlogThis!Share to TwitterShare to FacebookShare to Pinterest
Labels: Bummer, Gatsbi is now on medicine, Life goes on

Good luck with your new regimen! One of my Mommeh's Cats-who-came-Before had diabetes and she gave Slinky insulin shots. At first the diet worked well though!

Oh Maw - so sorry to learn about Gatsbi. Sending purrs from the Purries to Gatsbi and big *HUGS* from me to you!
Sorry I haven't been around recently - hope everything else is okay!
♥
Mo

We are sorry to hear about this news. Diabetes can be such a hard thing. Our boy has had it for 11 years and takes insulin. We hope you can find a diet that she will "approve" of. That can be a tough thing too.

We're sorry to hear about Gatsbi. We hope the diet works for her and you can get it under control.

Sending big purrs to Gatsbi. Our Maxfield, who came before, had diabetes. It can be a challenge to manage, and we are sending lots of healthy vibes your way!

Poor Gatsbi! We will purr. I hope everything gets under control!

Some kinds of Special Kitty at Walmart do not have a lot of carbs. Our Maggie Mae likes Turkey & Giblets Dinner, but there are others.

Some good kitty information is HERE

We will be purring that pretty Gatsbi will get it under control!
~ The Bunch

One of Mommy's before kittys had diabetes and she did the shots. It's really not all that hard. Just get a glucose meter and have the vet show you how to use it. It will make the job of getting the sugar under control easier.
Snuggles and purrs from Taz, Runt, Charles and mommy, Anna in IL

We are so sorry to hear about Gatsbi. We are purring that the diet and meds work.

We are sorry to hear that Gatsbi has diabetes. We hope you can find a suitable wet food for her that she likes. We are sending her purrs.

Purrs to Gatsbi, I is not a fussy eater, so I would be able to change ok, if it would ever come to that.

we is gonna be purring that gatsbi will like hers new food. yuki dont likes the k/d so moms knows how it feels to hafs a picky eater.

We hope Gatsbi responds to the present treatment and won't need insulin shots every day. Kelly was on the "C'atkins" diet and did lose several pounds by cutting out dry food and eating exclusively wet food. But be careful, because too much protein from wet food can harm a cat's kidneys.

We'll purr really loud for Gatsbi. We hope you find the purrfect food.

Sniffie and the Florida Furkids

Gatsbi, I know you can do it!!
Go work for it!!
And we will pray for your healthy,
hope you get better!

Aw, so sorry to hear about Gatsbi's diabetes. Praying that the food and meds work out.

We'll be keeping our paws crossed and purring for that you can get your diabetes under control Gatsbi! Thanks for purring for Moki as well!

Sending purrs Gatsbi that the icky diabetes stays under control and that you feel okay.

Poor baby girl. Our mom was just diagnosed with that.

We want you to know that we can't see your photos.