Here is Sally, wondering what Maw is doing at the pooter. 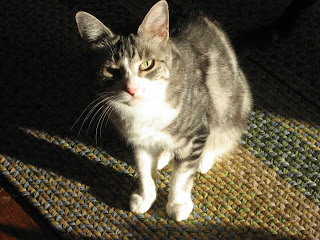 Sally and G.T., just chillaxin' in the office. 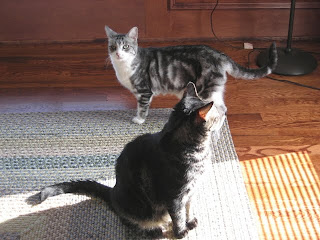 Smokey and Dorf, lounging on the beds for the Leap and Sleep that Maw was trying to put together. 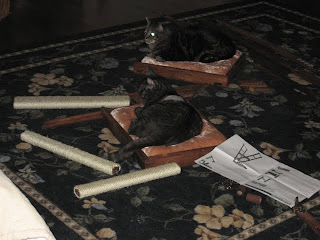 And, today is National Feral Cat Day. Yes, we have a couple of feral cats here. Jenny was trapped when she was about 3 months old, and she has never become overly friendly to where she could be picked up and handled. She doesn't get medicine except a crushed up thyroid pill in tuna juice each morning. She has only been to a v-e-t just a few times in her 16 years.
And then we have Orinch, who we trapped years ago and had him neutered and vaccinated, then we released him back into our yard. We have fed him for years, and trapped him again when we moved a year ago in April, and brought him out here to live with us. Now he is an inside cat, and he appears happy about that, except that some of the poodins pick on him. And we don't touch him.
Ferals deserve to live. They need to be trapped so that they can be fixed and vaccinated, then they are released back to their colonies. Some feral colonies have stray cats that used to live with people, and those cats are friendly, and can likely be rehomed to live with humans again. To learn more about Feral Colonies, go to Alley Cat Allies at: www.alleycat.org/NFCD.

We love our little formerly feral Gemini--and we know that she is because she is not a friendly cat. Sometimes she decides she wants attention and she trusts the Woman but no one else.

Sure glad that you took Orinch with you when you moved. The feral cats do make great pets to have around. They are shy of strangers and I have a lot of them, and some are very tame and some are still wild. It is very rewarding to see how they can be tamed. Take care and have a fun day.

Great post and pawsitive thoughts on this special day for cats who have homes on their own terms. We want to keep them safe and healthy.

You are right...feral cats deserve to live too! We're so happy that Orinch is living with all of you now..but don't pick on him, okay??

Paws up for your post about your family ferals! My human is not sure, but she thinks the cat before me, who she found on the streets of San Pedro as a kitten, was at least semi-feral because she did not play with cat toys and definitely had a strange anti-social streak.

Thank you for such a great post about National Feral Cat Day. It sure sounds to us like Orinch and Jenny are happy living with you ... even if you can't touch them. :)

Great stories and a great message about ferals. They should be protected! Happy weekend!

Your friends, Fuzzy and Zoe

We do not know Angles origins but consider her a formally feral or street cat. She was just a baby when we found her and brought her in. After two years, she will let us pick her p and cuddle her a little!

This post is so great.
Thanks for sharing for us!