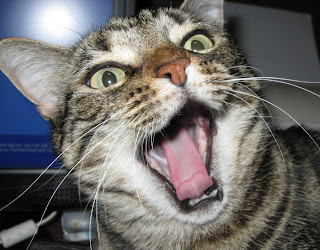 Annie wasn't feeling real great. She was sitting in a scrunched up position, and not coming out very much. So, Maw took her to the V-E-T last Wednesday. Maw told the V-E-T that Annie was moving her mouth around a lot, and was sitting in a scrunched up position most of the time. So, the V-E-T thought she might have dental issues, and sure enough, she did! She had a couple of FORLs. Feline Odontoclastic Resorptive Lesions. A couple of her teeth that were mostly gone were red and inflamed on the gums. So, Annie went back in on Friday and had those extracted. She feels much better now, and is actually coming out and wanting Chick-Hen from Costco. So, yes indeed. Annie gets Chick-Hen from Costco. Isn't she a wee bit spoiled?

Email ThisBlogThis!Share to TwitterShare to FacebookShare to Pinterest
Labels: Annie doesn't want to lose all of her teeth like Dorf did, Chick-hen from Costco tastes mighty fine

After having a dental, Annie should get anything she wants!

We agree--dentals aren't any fun (Nicki's had 8 teeth extracted and Derry had 9, and our now-angel Annie had 3 teeth out in Feb 2010). So whatever your Annie wants, she should get!

Not spoiled at all. Dentals aren't fun, but we are glad she is feeling much better now!

We wish Annie a speedy recovery!!!

Well Annie, we sure glad they found out why you weren't feeling well and that is all fixed. What a lucky kitty you are to get Chick-hen. Yummy.We might have to teleport over there and help you eat it. Take care. Glad you are feeling better.

I so feel for you as dentals are not nice but I am glad you are feeling much better now.. Hugs GJ x

We are so glad Annie's feeling better now. Chick-hen from Costco? PAWsome! :)

OHH! OUCHIES! Annie. My teefs are good but some of the other castle cats haf had teefs pulled. Not fun. I say you deserve anything you want after that!

Ohh, bless Miss Annie's little heart. We're glad you noticed her not acting quite right and were able to get her all fixed up! Who needs teefs anyway??

Your friends, Fuzzy and Zoe

Annie, we are so glad that you are feeling better and hope you get all the costco chick-hen you want!

Annie, we're glad you're feeling better! Now you can enjoy your chick-hen!

glad Annie is doing better. Must have felt terrible.

Poor Annie!
We are glad you are feeling better but what an ordeal to go through for chicken!

oh poor Annie! you are not spoiled - you earned that chick-hen!

I hope you feel lots better now sweet Annie and make quick bites of the chicken!!!

Lotsa kitties get those FORLs and they hurt even though kitties are good at hiding pain. We know that Annie will feel so much better now and will thank you for your TLC, too--and for that chick-hen!

Oh, We furgot to say sumthin' earlier, but Thank You so much for joining the CB Auction team! We knows you loves kitties and will be a great asset to have helping kitties-in-need!

this is the greatest news about Annie.
Pass the chick-hen!


bonks to all of you

this is the greatest news about Annie.
Pass the chick-hen!


bonks to all of you

The Royals and Gentleman Beau said...

Annie, you are very brave and a very good patient to Open Wide and let the V-E-T get those nasty little buggers out for you! But of course it should be a given Annie gets whatever she wants Whenever she wants!
The Royals never had Chick-Hen from Costco! We must try some soon, we love chick-hen!