Annie Needs Your Purrs and Purrayers 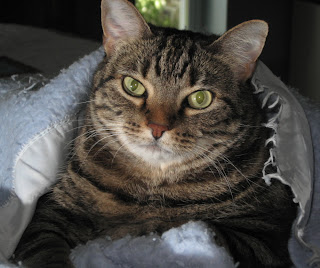 Annie had an infection from having her teeth extracted, and had to go under and have an additional root extracted on a tooth that should have only had 2 roots. Then she got another round of antibiotics, and then she had to go back in for a checkup yesterday after her antibiotics were gone. Not good. The upper right gum is totally swollen, and so she had x-rays, and then the vet took out another tooth behind the tooth with the extra root. The tooth taken out was the back molar, which should have been very difficult to extract, but it just pulled right out, as did some bone pieces. And the bone pieces were like styrofoam. So the V-E-T called his V-E-T feline dental buddy and asked his opinion on Annie, and the dental buddy said it really sounded like a tumor to him based on what has happened to Annie over the last month. That's what Annie's V-E-T thought as well. So he is sending off for a biopsy, but he doesn't think it looks good. He said if it is a cancerous tumor, that Annie probably only has about 1-2 months left.

So we are asking for everyone's purrs, purrayers, and tons of hugs.

Email ThisBlogThis!Share to TwitterShare to FacebookShare to Pinterest
Labels: Annie needs your purrs and purrayers and hugs

Oh Annie, that is terrible news. I am sending you lots of purrs!

Annie we're sending you our purrs & prays for you.

Oh no! We are purring for Annie!!

Annie,
we is sending you lots of hugs and snuggles of positive thoughts to carry you through...
Keep purrin,
Taz, Runt, Charles and mommy, Anna, in IL
(3 kats and a kwilter)

Oh no, we're sorry to read this news! We're purring and purraying for the best outcome possible, sending love and Light.

Oh no, that is not good news. We sure are sending tons of purrs and crossing our paws like crazy. Mom is going out right now to tell the donkeys to cross their hooves for you Annie. Just maybe it is something else. Lots of hugs to you Mom.

Annie, you've got us purring for you!

Oh no! We will purr very hard for Annie!

Oh, no, that is really bad news. We hope Annie doesn't have a tumor. Purrs and tail wags.

Purrs from all of us! We will hope for the best for Annie.

Oh Annie, Harley and I are keeping you in our thoughts and purrs.

We are sending our strongest purrs that things will work out well.

Oh sweet annie you have my purrs for sure and I so hope that its not a tumour. You are in our thoughts and prayers.. Hugs GJ xx

We're purring loud and hard for good news for Annie.

My dear sweet Annie.
I cannot bear to think that ...
No I refuse to think anything but positive things andni will purr for a total and complete recovery...

Yours in purrs
Mr. Jinx

Annie, we are purring out loudest for you!

My thoughts will be with Annie

Purring for you, Annie.

Oh noes, poor Miss Annie. We're sorry that she's having problems. We do hope it's not a nasty tumor, and we're sending our bestest purrs for you all.

We are purring & purraying for Annie. Hopefully the v-e-ts are wrong & she feels better furry soon.

We are sending many rumbly purrs for sweet Annie. We hope it isn't a tumour and Annie feels better soon. Sending hugs for da humans too.

We are purring and praying real hard for Annie! We sure hope the v-e-t's are wrong...

All our purrs and prayers for Annie. How awful! I hope she's noticeably better by now.

Dental-anything is absolutely no fun, not for kittehs, not for beans. =(

I came to thank you for the well wishes on my blogoversary, but let me add my purrs to hope Annie is going to be okay!!

Thank you very much for sending so many purrs and headbutts to make us feel comforted and much loved.

Dental problems are painful. Poor Annie. We are sending lots of healing purrs and headbutts; hugs to her human.

We are following you now.

Annie we've just now stopped by and seen this.
Honey we are purring at full throttle for your recovery from this terrible ordeal!
xxxooo
Scooby, Shaggy & Scout & Mom Lynne

Lots of purrs for Annie and all of you.

Lots of purrs and meows for Annie! Oh may Annie be comfortable.

oh my cod, so sorreh to hears this... please know we is sending purrs.

Oh Annie, we're sorry that your teeth have been so difficult and we're sending super big bunches of purrs for you!