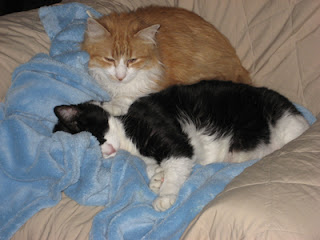 Update: The v-e-t said that most of Obi's insides looked very healthy and normal. However, his colon and large intestine were lumpy and his lymph nodes were swollen in there as well. So the v-e-t took 2 biopsies and took one of the lumps to send off for histopathology. The v-e-t said it might be cancer, but we can put him on drugs to help him out a bit better than what he has been on. We should know more next Tuesday or Wednesday from the biopsies. Please keep Obi in your purrs and purrayers and send him tons of hugs, okay?


Obi hasn't been feeling well lately. He has had OLB (outside litter box) issues for quite some time, both the poop and the pee type. He is on Metamucil to help firm up his stools, on 5mg Prednisolone daily, and he was put on Prozac a few months ago to help with the OLBs. The Prozac helped quite a bit, but he was still going outside the litter box more than we had hoped. He has always had loose stools. When he initially came to us, he, Sally and Smokey all had horrible diarrhea. They were on Flagyl for months to clear it up. Obi's never became really hard stools, and hence the various meds that he is on. Plus, he had a perineal urethrostomy when he was a couple of years old because he was blocked and he was in the vet clinic for a week on a catheter and fluids.

So, long story short, Obi has lost a good bit of weight, he is becoming incontinent, he is losing fur, and he sits hunched up all the time. He is hiding under the bed, which he has never done before. His blood work is all perfectly normal. His X-rays are normal. He has no masses that can be felt. But he doesn't feel well at all. He is only 9 years young.

So he is getting exploratory surgery today. Please, everyone send tons of purrs and purrayers and many hugs to Obi and let's all hope that the v-e-t finds something that can be fixed!

Email ThisBlogThis!Share to TwitterShare to FacebookShare to Pinterest
Labels: Let's all pray that it is something that can be fixed, Obi and Reno on the chair, Obi isn't feeling good, we hope to find out what is wrong through the surgery

Oh my! We didn't know Obi was feeling poorly. We will definitely send purrs and purrayers his way! Please keep us updated. xoxo

We're purring really hard that the surgery goes well and that the doctors can find out what is wrong and that it is treatable.

Poor Obi! It sounds like he must feel terrible. I hope the exploratory surgery reveals something so he can be helped. I am sending lots of purrs his way!

Oh Purrs to you Sweet Obi--what a lot of things you have going on! I hope that they can find what is wrong and make you feel better.

Oh dear. Poor Obi. We hope the vet finds something that can be fixed during the surgery. We will send purrs and say our prayers that Obi's surgery goes smoothly and the vet is able to fix the problem and for Obi to be well again.

We're purring and purraying for Obi, hoping they find something easily treatable. It's not IBD, is it?

KC and the Giggleman Kitties said...

We's sending tons of purrs to sweet Obi, we hope it is sumfing fixable and minor.
Love,
KC

Poor Obi. We are sending lots of purrs and hope the exploratory finds what is wrong so he can get the right treatment and feel better again.

My sisters and I are all sending you tons of purrs sweet Obi, we will be think of you sweetie.

We have come over especially to send some healing purrs to sweet Obi. We hope the vet can make it all better xxxx

Poor Obi, it sure sounds like he feels terrible. We sure are sending tons and tons of purrs that they can easily find what is going on with him.We will get the donkeys to cross their hooves too. Please keep us updated. Not a fun time at your house.

We're ramping up the purr machines for Obi. We hope they find out what's wrong and it is easily fixable.

We are purring very hard for Obi and hope that the v-e-t can figure out why he is feeling bad and it is treatable.

We hope that the v-e-t people can figure out why you're not feeling so good.

Sending big bunches of purrs to help you feel better,

Poor Obi, it certainly sounds as if something is wrong. We are sending healing purrs and pawsitive thoughts. We hopes they can find what is making Obi feel bad and fix it.

We have got our purr motors revved up for Obi.

We sure hope he'll be ok.

Oh Dear we are sorry to hear about Obi's sad situation. We are sending our best healing purrs along for a successful and hopefully the vet can figure out what is wrong!

Oh, yes! Lots of hugs, purrs and woofs for Obi. We hope nothing bad is found during the exploratory surgery but do hope the source of the problem is located and easily corrected.

We will be purring and purring for Obi to feel better and for the
v-e-t to find an easy fix.

Poor Obi - we are sending our best loudest purrs to him to help him feel better and to help the vet find out what is ailing him.
Luv Hannah and Lucy xx xx

I am so sorry Obi is having all this difficulty. And I am praying up a storm for Obi and for his 'beans!!!!

Thanks for the update. We certainly are sending many purrs and prayers. We hope those tests show some good news. Glad they have some medicine to make him feel a little better.

Poor Obi! We are sending BIG TIME purrs and prayers!

Oh dear, we hope they find out what is causing this and can fix it. Poor Obi - sending tons of purrs for him!

Sending good thoughts and purrs for Obi. Thanks for the update. Hope things work out and all will be well.

Oh our dear friend Obi. we are all so sorry you have been having OLB problems. We are sending your extra strong purrs to help you heal from your surgery and feel better and we have already started purraying about your test results.

Oh dear! Harley and I are keeping Obi in our thoughts and purrs.

We are purring for Obi. Thank you for the Christmas card!

We are thinking of Obi here. One of us had lymphoma but is now in remission and we know all about the catheter and stuff. So we will purray hard for Obi too.

All of us are sending healing vibes and purrayers for Obi!

Thanks fur the update. Purrin away fur Obi. xoxo

I am really glad that most of Obi's insides look good. Herman sends purrs and I send hugs for good news next week.

Obi,we are sending you many many purrrss and lots of {{{HUGS}} for Maw and Paw

We came back to see if there was an update. We hope that the biopsy results come back negative for cancer.

Obi, kittie, we didnt know you were feeling sicky. Purrrrrrring that what ever is bothering you is simple and easy to treat.

Oh, we are so sorry to hear about sweet Obi. We will be sending up lots of prayers. Hugs and nose kisses

I hope and pray that Obi is getting better and better. Merry Christmas!

Obi, we just heard about your surgery so we dropped by to send you many rumbly purrs and love. We hope that the vets can help you and you feel better soonest. We are sure that some Christmas turkey will help with that..

We have been holding Obi close in our thoughts and prayers ...
be well, little one.

Merry Christmas everyone and our best purrs to Obi.

We continue to purr for Obi and hope that it's not something serious.

Merry Christmas to you all.

We are purring and praying for sweet Obi to recover asap...We are so blessed to have you guys in our lives; wishing you all a safe and Merry Christmas, precious friends...love and hugs...J, Calle, Halle, Sukki, Mommy Cat, Daddy Cat

We came by to leave a hug and some purrs for you humans to have a nice Christmas with the Forty Paws felines. Hope Obi is doing okay.

Sending love & hugs to Obi and YOU!

We found you through the cat blogosphere. We are sorry Obi is struggling and hope that a diagnosis can be made so he feels better. Hugs and purrs to you.