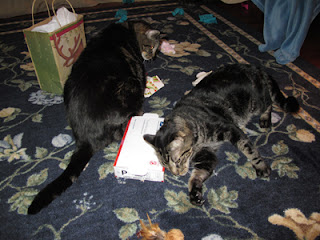 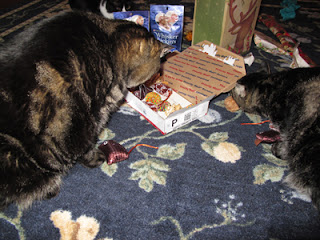 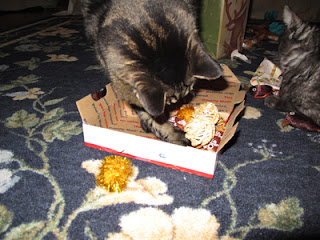 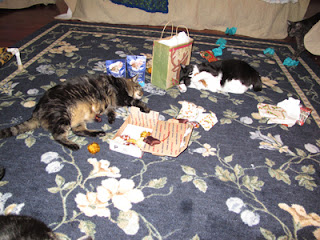 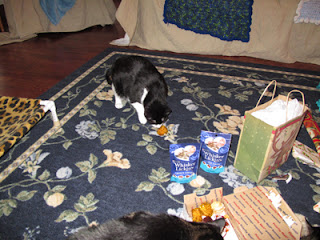 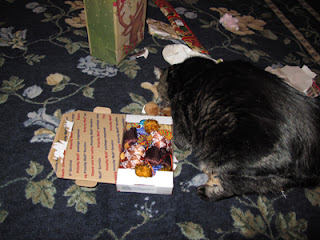 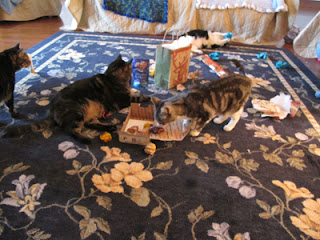 We opened our Secret Paws Package! It came from Purrchance to Dream! It was totally awesome! And Dorf played with many of the toys, and was lying in the box and efurryting! They love the wooden balls! Dorf and Reno were chasing them around the room. And the many meeses to chase, and the Whisker Lickin's Crunchy Tuna Variety treats! And the soft little balls that Reno lufs to play with! And the sparkly balls that Reno carries around the house and meows when he is carrying them is wonderful! We were having tons of fun. It was efurryting that we requested on the Secret Paws wish list! Purrfect shopping NTM!!!

Then we crashed. Because we were tired. Crissymouse time is the best!

Update on Obi: Obi came downstairs today and slept on Maw most of the day. This is the first time he has come downstairs since Maw brought him home from the vet clinic on Friday. And last night he slept on the bed with Maw, and that is the first time that he came out from underneath the bed since Friday. He isn't eating very much. Just a few morsels now and then. He is just mostly sleeping. Poor ol' guy.

Email ThisBlogThis!Share to TwitterShare to FacebookShare to Pinterest
Labels: Obi is getting up a bit more now, Secret Paws is the best, we had so much fun today

How nice that your Secret Paws Package had all the fun things you love!
We're glad Obi's feeling a little better. We hope he'll be back to his normal self in the next few days.

Oh how exciting! We love presents - even if it's just paper.

That looks like a really fun Secret Paws package! I'm continuing to purr for Obi - I really want him to feel better!

Glad all of you had fun with your secret paws package. It does look like a lot of great toys. Glad for the update on Obi. We are sending many more purrs in hopes that he will get all better really soon. We were thinking about you Obi over the week end.

Your Secret Paws package looks like loads of fun!! We're glad Obi is out and about and not just hiding under the bed.

Your package looks just the job for lots of fun. Enjoy.. I am glad there is a little progress with Obi and hope the eating starts soon. Mum says she so feels for you as she knows.. Hugs GJ xx

What a fun Secret Paws package!!

We continue to purr for Obi.

Good to see an update on little Obi; sounds a bit like our Zoey right now, sleeping a lot, hiding out, surely not 100% but on the way to it we hope! And we hope Obi is on the way, too.

That is a great Secret Paw package.
We are sending more purrs for Obi.

What a great SP package! We is purring hard fur Obi, too. Happy Holly-daze, kittehz. xoxo

You got some great presents!!! FUN!
Dear sweet Obi, we hope this is a sign that you are feeling better and getting stronger! xxxooo Purrrrs

That sounds good for Obi. We are glad. And what a great gift!

Lovely Secret Paws package! We are sending lots of purrs for Obi, and hope he is feeling better and his tests turn out not to be serious health issues.

You hit the jack pot! WE are glad Obi is feeling a little better!

Just dropped in to say HI. Purrrrrring that you are all cuddling together in a big kittie pile by now.

So glad that you received your Secret Paws and loved it.

We are purring really hard for Obi.

So glad the Secret Paws goodies were a hit!
It was fun shopping for 40 Paws, and even more fun seeing their reaction! Those little wooden/wicker balls are great - and very durable. I spray some catnip spray (or toss them into the big jar of 'nip when I'm lazy) to revitalize them every once in a while.

We continue to hope that Obi improves with his new meds.

Sending LOVE and wishes for a healthy & prosperous new year to all of you from all of us!