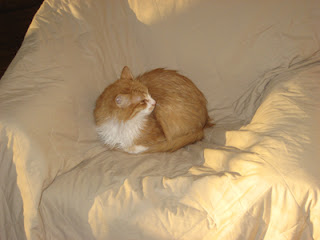 Here is Obi sitting on the chair at some point after his exploratory surgery. He seems to be doing a bit better, although he has lost some weight. He is now on Chlorambucil in addition to his daily prednisolone tablets, and his daily Zeniquen tablets, and his poop is a good bit more firm than before. He still appears cold a good bit of the time, and lufs to be held by Maw. He is eating and drinking regularly.

In other news, Maw took Jenny in to have her nails trimmed because she was sticking to the carpet, and can't pull them out because she is getting a wee bit older in age. So, Maw is holding onto Jenny by the scruff of the neck, and Jenny is NOT A HAPPY CAMPER. Remember that Jenny is still mostly feral, and it is only because she is not as strong as in her younger years, and can't hear ANYTHING at all, that Maw is able to catch her to put her in a carrier. Now, she has had her nails trimmed before by the v-e-t, and all went fine. But this time, Jenny reached around and bit Maw on her hand during the trimming. And Jenny escaped from Maw's hold, and only had 3 paws trimmed rather than 4 paws!

So Maw scrubs her hand with iodine a few times, and then goes home and soaks it in iodine in water for 1/2 hour, but still calls the bean v-e-t and asks for antibiotics because she knows that a bite from a poodin is not a good thing. And yes, the bean v-e-t called in a prescription for antibiotics, and even the next day Maw's hand was a little bit swollen, and Jenny didn't even bite too deeply. And the bean nurse asks what we are going to do with the cat that keeps biting Maw, and Maw tells her that this is a different cat from the one who bit her last June. (That was Orinch last June.) So, always get those antibiotics people! Call your bean v-e-t or go to see them immediately!

Email ThisBlogThis!Share to TwitterShare to FacebookShare to Pinterest
Labels: Jenny bit Maw and now Maw is on antibiotics, Obi is doing better

Poor Jenny, We know how scared you were. We know you did not want to hurt Maw. We hope Maw's hand does not get infected like last time!

Purrs for Obi and for your Maw's hand. We hope both of them are MUCH better soon.

And a very happy blogoversary to you all too! Here's to many more years in the CB!

Sure glad to hear that Obi is doing a little better. Sorry the Mom got bitten. She is so correct, that a cat bite is not something to fool with.
Happy Blogoversary to all of you. Hope you have a super day. Take care.

Happy Blogoversary to you all and especially your Mom with her poorly paw!
Luv Hannah and Lucy xx xx

Glad that Obi is doing a little better :-) Sorry to hear about your hand, yikes cat bites are sore! We read on the CB that it is your blogoversary today, congratulations, we hope you have many more happy blogging years ahead!

Our mom has learned her lesson about cat bites after having been bitten twice and ending up in the ER the next day.

Healing purrs for Obi and for your Mom's hand.

Congrats on your Blogoversary.

It is always best to consult the bean vet with any cat bite. Your Maw was right-on! Poor dear Obi..we loveyou and send purrs for healing. Maybe Maw will have to put a little kitty sweater on you or keep tossing a blankie over you to keep your temp up!
Happy Blogoversary dear friends!!!!!!!

Yes, those bites are bad. Hope Maw's had is healing nicely and the pain is subsiding.

We are glad everyone seems to be healing well. YEAH!

Sorry about the bite, Maw - Grimmy bit me very hard (including a fang under the thumbnail) and I'm glad you were able to get antibiotics.
Hope that Obi continues to get better, and congrats on your blogoversary!

It is good to hear Obi is doing a bit better. Praying he will be lots better very soon. Sorry you have another bite...take good care of it. We are sorry too that Jenny only got three paws nails clipped at least that many were done. Hugs and nose kisses

We're happy to hear that Obi is doing better. We purr that he continues to improve.

Our mom knows all about cat bites and taking those antibiotics! No! We don't bite her! It was the one that came before us. He bit our mom several different times! We hope your maw's hand is better soon.

We are glad Obi is doing well. We hope Maw's hand heals well too.
Happy Blogoversary to all of you.

Big purrs and prayers for your Maw's hand.

Purrs for Obi, poor skeered Jenny. and Maw's hand. Taffy tried to bite her mommy today, too. If only humans could speak better cat.

Obi we are glad that you are doing ok. Keep eating and you stay snuggled up warm in the sun puddles. We are still sending you love and rumbly purrs fella.

Oh Jenny! You are showing that even though you might be an older feral gal, you still have lots of fight (and bite) in you. We hope your Mom's hand is ok though and send her some purrs too!

Oh dear Maw we are glad you are doing OK...we hope that is still the case. Abby bit Mom a few months ago and she went right to the DR. She knew it was going to become infected and it did, even though she went to the DR. She ended up in the ER because it got worse and the Dr said if it gets worse go to the ER. She is glad she did. She hopes she doesn't get bit again.