Jenny and Obi and Orinch

Here is Jenny after we sedated her and shaved her at the v-e-t's office. She is 19 and no longer grooms, so her fur was matted, and we tried to trim it off, and shave it off, but she became very tired of us trying to get the mats off, and would fight us. So, we took her to the v-e-t and she was very lightly sedated, and shaved. The poor girl is just skin and bones. She has hyperthyroidism, and will only take her pills in tuna juice, and doesn't always drink it all up. So her thyroid levels are much too high, and she eats continuously, but she isn't doing too great right now. 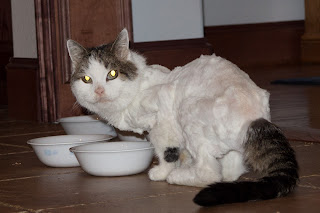 Then we have Obi, who is now in renal failure. The poor guy will turn 11 in May. He had a perineal urethrostomy when he was 2 years old. And he was fairly healthy for a good portion of the time over the next few years. But then over the last several years, he began going outside of the litter box with both urine and feces, and sometimes he has real liquid fecals. Well, he was taking prednisolone daily, and would have 1/4 tsp. metamucil mixed into some liquid from his stinky goodness. But after a couple of years of that, he was really having out-of-litter box experiences. So we increased his meds, and changed his meds, etc. So, now Obi is receiving Zoloft for anxiety, Dexamethasone, Zeniquin, Chlorambucil, and since Tuesday is also receiving Tumil K (potassium) and Benazepril for his kidney failure. As well as pumping him full of 300ml of Lactated Ringer's daily. He had dropped 2 pounds over the last 2 months, and his BUN and Creatinine levels were super high with his blood tests. And his potassium levels were very low. So, we are seeing how this works for a few weeks. Then tonight, while sitting in Maw's lap, he had a seizure. Maw is just heart-broken because Obi is one of her bestest kitties, and he loves to be held, and he is so easy to give pills to, and Maw and Paw are now bathing Obi and blow drying him because he isn't grooming anymore, and his fur is getting greasy and unkempt because it is long. Here is a picture of Obi from several years ago. Maw is very sad and is crying now. 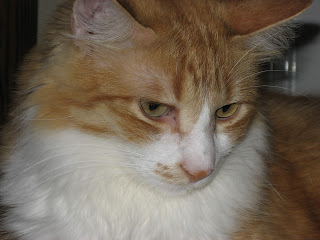 Then we have Orinch. Orinch has FIV, and has had a cough for quite some time. But then it became a really loud cough and sounds like he has bronchitis. So, off Orinch went and had exams and x-rays, and fluid pulled from his lungs. So, Orinch has a collapsed lung and asthma. So, he is on prednisolone daily and has an asthma inhaler. 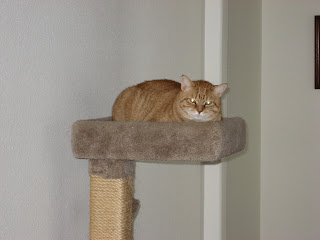 In addition to these three cats, Smokey gets a prednisolone pill daily so that he doesn't go into puking fits. If he doesn't get his pill, he pukes and pukes and pukes until there is nothing left to puke, and then he still pukes. Sometimes, he needs a shot to stop this. So, he gets a pill daily.

G.T. gets a serum shot every 2 weeks for his allergies, and every 2 months he also gets a shot from the v-e-t because he starts chewing and itching until he gets ulcerated areas that begin bleeding.

Our v-e-t knows us very well. Usually, Maw is over at his office with one of us, or picking up additional meds or food for us on a weekly basis. And Maw called him tonight after Obi had the seizure and they talked for awhile about the seizure, and what to watch for, and to call immediately if Obi has another one tonight.

Email ThisBlogThis!Share to TwitterShare to FacebookShare to Pinterest
Labels: Jenny and Obi and Orinch and G.T. and Smokey, our v-e-t bills are rather high, sick is not a good word around here

Poor kitties! I am purring my very best for Jenny, Obi, Orinch and you!

Momma and i are very sad because of all these. Purring for all the kitties. Maw, please stay strong. Momma is sending hugs to you.

We're sad that your cats are all having a rough time. Our head peep remembers what it was like to have the vet roll out the red carpet for weekly visits. As a new receptionist at the vet's office once said, "Wow, your file is thick!" We can tell your Maw and Paw love you a lot. Many purrs for you all!

Oh Merceda, we are so sorry that your kitties are having such a hard time. We send lots of huge hugs to you. We know how hard it is to have sick kitties. We also send all of them tons of purrs in hopes their lives can even out a little bit. Big hugs to the kitties too. Take care.

Oh, no...Purrs to you all, getting older is so hard, for any Being. We purray everyone still has quality of life, because in the end, that's what matters.

Oh Maw, we are so sorry that so many kitties, 'specially Jenny, Orinch and Obi, are having so many problems now. We are purring for all of them...and you too...we know how difficult this is. oxoxox

Oh my! Purrs to you and your family. And how lucky these guys are to have you taking such good care of them.

I am sad that so many kitties are suffering at the moment. They are so lucky that they have you to love them and care for them. Hugs GJ x

Purrrrsss for all of you kitties & beans. We hope all the kitties keep hanging in there.

PS: The ham-mick is empty at the moment, but that is about the first time all day.

Oh my goodness! That's a lot to deal with all at once. We're praying and purring for all of you! Hugs!

Merceda, I am so sorry that your babies are so sick. You are giving them the best that you can. Sending purrs and prayers.

We are all purring for you kitties and for Mom and Dad too! Dad says it is difficult when one of us is just a bit sick he cannot imagine how you handle this.
We did post on my blog how much we love the Ham-micks.
Love you very much!
Timmy and Family

we haven't been visiting much lately. we are sad to hear about Jenny, Obi and Orinch. we is gonna send purrs and prayers for thems.

Oh wow, you have so much going on at your house for sure. You all will definitely be in our thoughts and prayers and we will be purring our biggest and best purrs for all the kitties especially Jenny, Obi, Orinch, GT and Smokey and for Maw and Paw too. Your kitties are so fortunate to have such caring Pawrents who really are so dedicated to their care. Bless you all. (We have such a soft spot for Jenny as she is a twin to our dear Inka who passed away a few years ago and when we see pictures of Jenny it is actually uncanny, really. So huge purrs to Jennyl.)

oh no... Lucy and I will be purring like crazy for all of you

We are sending healing purrs to everyone.

purrs and purrs and PURRS from all of us...our Mommy says she's not looking forward to all of us getting older. We'll be thinking of you.

Oh we is all has a big sad too. We is so sorry to hear about Obi, Jenny, Orinch, GT, and Smokey. We understand that it's tough as kitties age. Momma looks at Boo, Jinx, Ping and Gracie who are all about the same age and wonders how it will be if all of them get sick all at once. We are purring and sending lots of kitty nosekisses to Maw and Paw and everyone.

You certainly have a house full of special needs kitties. How wonderful and generous you are to love and care for them. We are going to keep each and everyone in our prayers. Purrs and hugs from the kitties at The Cat on My Head, Lily Olivia, Mauricio, Misty May, Giulietta, Fiona, Astrid, Lisbeth and Calista Josette

Sending lots of purrs to Jenny, Obi, Orinch and G.T., and hugs to Maw. Our human knows exactly how Maw feels having been in the same situation before.

We're so sorry you are having to deal with all these issues at once. Purrs and prayers and big hugs to you all.

oh wow guys, we is purrring really hard for you all!!!

Sending our best purrs and prayers to them~!!!!

Sending LOVE to all of you, from all of us at Purrchance To Dream

Awww kitties, you need lots and lots if purrs. We are sending you plenty from our home. Hope you can all get better real soon!

Thanks for taking the time to send purrs to Milou. We really really appreciate.

Thank you, dear friends, for your kind and thoughtful comments when it was time for our Sammy to leave for the Bridge. We are so lucky to have such wonderful blogging pals.

Happy birthday, Obi, Smokey, Sally and Reno. We hope you have a super wonderful day, with lots of pets and snuggles and treats.

You and Paw are so loving and giving. It is hard to have just one furry with a health problem, but you have several.

We just learned your Jenny has gone to the bridge. We're so sorry for your loss. She was a lucky girl to have had 19 years with you. Hugs