Seven Random Facts About Me (Bow) 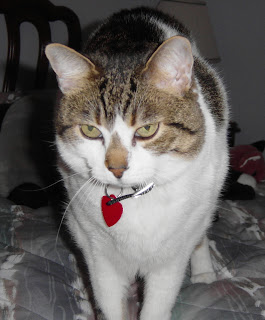 
One-Eyed-Jack tagged me, Bow, to play the Seven Random Facts meme. Actually, Jack tagged the rest of us here at the Forty Paws who weren't tagged.

You know the rules.

Seven Random Facts About Me:

1) I'm Top Cat. Don't get confused about this. I'm the oldest, I've been here the longest. I'll smack any poodin who thinks otherwise.

2) I'm usually in hiding so that Maw can't give me my Prednisolone. I hate taking my medicine, but I also hate yakking when I don't take it.

3) I love sitting in the cat enclosure. I used to be an indoor/outdoor cat for the first 10 years of my life, so I really love being outside, but then Davy was killed and we can only go into the cat cage now.

4) Back when I used to go outside, I came home one night in the middle of the night and Maw let me in. I was covered in used motor oil. Maw never did find out how that happened, but I had to go to the V-E-T where they Gooped me 3 times to get it all out of my furs. Yuck.

5) I have a bee-bee pellet in my back from when I used to go outside. Maw figures some mean kids used me as target practice in the field behind our house.

6) I love love love my heated cat cup. I was perfectly happy with it before Gatsbi and Jenny discovered it. I also love the outside temperature to be in the 80's. That's a nice, comfy temperature for me. Yup.

My tagees: Any poodin who hasn't played yet.

Oh keep saying it. Eventually she will listen won't she?!

Bow, you deserve respect! No more kitties means NO MORE KITTIES! My Daddy and I are in agreement on this one or else I have a gazillion brothers and sisters, too! I'm an only cat and that's how I like it!

Oscar, calm down. Bow's Momma is a wonderful woman for taking in all those kitties and giving them love and shelter. All people could take a lesson from her!

Holy Cat Nip, those Litter Robots are expensive! I bet they are worth it.. especially with 15 poodins.
I have reasonable expectations about the automatic litter-box, although, my mammacat is very very excited about it. I bet Katie tries to play with it and it breaks. (she is gross like that, sometimes)

I bet it's nice to be the top cat, Bow, you get to give everycat the smack-down! hehehe

Bow, this is amazing! You're the first guy I've ever known who has a nose smudge just like mine, except yours is tan and mine is grey!

Whatta great list! I loved learnin' more about you. My big sister Brainball is top cat around my housie and she's been around the longest, too. Alpha Cats are cool!

Kittyhugs and purrs from MaoMao!

I am da boss and top cat in my howse! Even tho Sadie sez she is, she is a lier! We top cats gotta get deze kids to tow da line, am I right!~Zippy
Yoo and me big guy, we'z da bosses~Sadie
Um, Does it make me a wimp that I don't care about being top cat? Maybe yoo cood gif me some lessons, tho it seems like an awful lot of work.~Speedy

Duzn't sound like yer Maw is listening to yoo about no more kitties, yoo'll just haf to keep telling her.
Our mum sez she'd like to git hold of those mean kids and use them as target practice. She's a pretty good shot too cuz she beats dad sumtimes, but he duzn't like to admit it. They shoot sumfing called clay pijjins but they don't look much like pijjins to us cuz they got no fev-vers.

Zoey and the furballs said...

It's good that you have asserted your top cat status. As for more kitties, I lost that argument and Mommy keeps looking at the rescues for a meezer and a bengal. I've told her no more, but she doesn't listen. I guess the best we can do is to make sure the other kitties respect our top cat status.

You have no control over what your Momma does when it comes to getting more paws! Believe me, that is a law, written someplace.

Bow, those facts were very interesting. You do have a lot of siblings, but your Mommy is very wonderful for taking care of everyone. We give her a 4 tail salute!

How *did you get the motor oil in your furs, Bow? You must know!

I am glad that you liked your limerick, Bow. Thanks for mentioning it. I hope you find a way to get your heated cat cup back from Gatsbi and Jenny.

I am like you -- top cat.
I defy any cat to try and take that title from me.