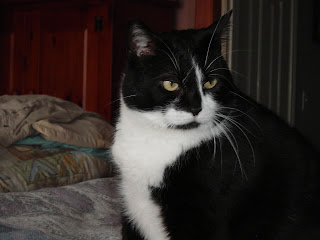 Gatsbi had to go on a D-I-E-T because she quit moving and the V-E-T said she was twice the size she should be. With her neurological difficulties, she has enough trouble getting around, but the additional weight made her just give up and she pretty much stayed in the bedroom all the time and hissed and growled at any cat who came close to her.

So Gatsbi started eating Science Diet R/D back in February. Since Gatsbi can't jump on counters, or on tables without a chair strategically placed to help her, we were able to place all the other foods that the rest of the Forty Paws gang eats on the bathroom counter and the dining room table. Gatsbi's R/D was the only food to remain on the floor. So Gatsbi has lost 3.5 lbs. since February! And she is like a new cat! She stays out in the living room most of the time now, and actually jumps up on the furniture which she hasn't done for years. She is grooming herself once again. She has become more talkative and tries to participate in the Whirlybird play when it comes out of hiding. (Again, her neurological problems keep her from playing like most cats do. But she does attempt.) And, Maw & Paw are actually having trouble at first glance determining which Tuxie is Reno and which is Gatsbi! That's never happened!

So, for any of you poodins out there who have been told you need to go on a D-I-E-T, it really does help you! You'll have more energy and maybe even gain a rosier outlook on life!!! And the rest of us Forty Paws like the R/D also. We all eat it, along with Gatsbi. We like to show our solidarity in these matters.

And for some more good news:

Deshawn Brown was found guilty yesterday of a 3rd degree felony in the torturing of Mercy, his dog. You can read the article here. Let's hope that he gets the maximum sentence. And of course his momma defended him and said he wouldn't never hurt no dog and that he couldn't get a fair trial in Dallas because of all the publicity. The lawyers did request a change of venue, but the judge denied it. I'm assuming that they will appeal the verdict after the sentence is handed down.

Congratulations on the weight loss Gatsbi! I am happy to hear that you are able to jump and groom again. :) That is great news! :)

Let's hope that horrible human who tortured his dog gets the maximum sentence. It is terrible that people can be so cruel.

we hopes that the nasty human gets sent away for a long time.

Now that is a huge accomplishment!! Its so great to hear you feel better. I'm on the line....for now I'm OK but I might need to loose weight this year.

Fortunately it's not (yet) the case with my cats, they all are still in a good shape. Only Kim's behaviour worries me a bit, she doesn't want to sleep inside and is always out. I bought her a tent now !

Gatsbi, I am very proud of you for losing weight on your reducing diet! That is a big accomplishment, and I am happy to learn that you are feeling so much better now.

And I am also glad to learn that the BAD man who tortured poor Mercy got in serious trouble for it.

Wonderful news Gatsby! Glad you found your energy back, its time you serve your duties of mischief.

So when we say "The Great Gatsbi" it has more than one meaning?
Do you measure out the amount she gets, or is that impossible with the others nibbling it too? Shaggy was on m/d (metabolism diet) but he threw it up mostly. Do you know the difference between m/d & r/d? We ask lots of ???? don't we?
Good for you Gatsbi!!!

i think i need to eat that foods too and loose some wate!

Yay for Gatsbi!!! The Lady just joined Weight Watchers and she wants to know how many points that food is. Sounds excellent! Grr managed to lose some weight too. She's still able to jump up on stuff, but not quite as well as Cocoa and I do.

We're glad that (string of bad words deleted) was found guilty. We hope he gets exactly what he deserves.
Midnight

Since we switched from Iams Kitten to regular old adult Iams, Spooker has lost weight, too. And she's more active & affectionate, too - and can jump easier.
Guess I should follow her & Gatsbi's examples, eh?
Oh, and I think any human convicted of torturing an animal should be tortured in exactly the same way as they did to the animal. But that's just me.
~ Not The Mama

That's very good you've lost so much weight, Gatsbi. Congratulations. I'm glad it's made it easier for you to get around now, a great benefit from your weight loss :-)

Way to go Gatsbi! Congratulations on losing 3.5 lbs! We's glad you are able to do things again that you used to do. Keep up the good work.

Well done Gatsbi. Mum had some samples of Hill's Science diet furr Eric, but he reefyoosed point blank to eet it. I didn't like it either. We bofe haf Proplan light but Eric hasn't lost any wate wiv it. He sez it's not fair cuz I eet twice as much as him and nefurr put on wate.We're glad the evil man wuz found guilty. We hope he gits efurryfing he deserves and more.

Gatsbi, that is great news.I bet you feel like a new cat!Yay!!
Glad that bad man was found guilty.

Wow that's a BIG weight loss - concatulations. I need to go on a D-I-E-T, but anytime Mum buys diet food I won't eat it and I just cry and cry and cry.

Diets are soooo hard. Soooo much suffering. It is great that Gatsbi is at a healthier weight!

Animal cruelty should be severely punished!!!

Good job Gatsbi, you look great! And we hope that bad man gets the toughest sentence they can give him!
Your FL furiends,

Well, you know how I HATE that word diet, but I must admit that it sounds like it's working out well for Gatsbi ... I'm glad she's moving around and playing some again!

that is GREAT news. Castle went to the Vet Place yesterday and he is a fatty and is now on a diet - he weighs 13lbs which is not good for a Meezer. He got fat cos he kept stealing all my foods wehn i going through the chemo...how selfish is that? now he is paying for it!

Gatsbi should be a spokescat for the food! She looks lovely!
For that piece of human garbage that tortured his dog - I hope that he meets Karma and she kicks his worthless A**!!!!!!!!!!!
Ahem...sorry...

Dat's good dieting advice. You should run a cat boot camp for getting the plus sizes back into shape.